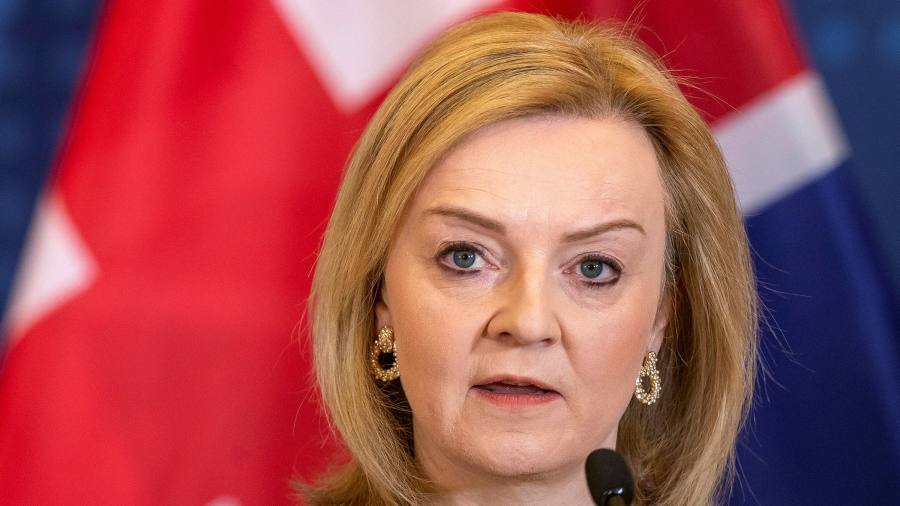 This article is an on-site version of our Inside Politics newsletter. Sign up here to get the newsletter sent straight to your inbox every weekday

Good morning. Is the UK heading for a trade war with the EU over the Northern Ireland protocol? Why didn’t the government’s legislative agenda include anything to help households facing rising inflation? And what happened to my prediction that the Conservatives would lose 220 seats in the local elections? Should I buy the imperial blue velvet jacket Instagram keeps advertising to me or would it be a step too far into dandyism? These are the questions preoccupying me this morning. Get in touch at the email address below.

Inside Politics is edited by Georgina Quach. Follow Stephen on Twitter @stephenkb and please send gossip, thoughts and feedback to insidepolitics@ft.com.

How seriously should we take the government’s warnings/threats/opening bids for further negotiations over the Northern Ireland protocol?

Boris Johnson yesterday told his Irish counterpart Micheál Martin that the UK’s current arrangement with the EU is “not sustainable in its current form”. Meanwhile, the Times revealed that foreign secretary Liz Truss is preparing to unilaterally amend the protocol. Brussels and major EU capitals said they had no intention of renegotiating the fundamentals of the post-Brexit agreement, which leaves Northern Ireland following EU rules for trading in goods.

But measures to address the protocol weren’t mentioned directly in the Queen’s Speech yesterday, and different bits of government give different answers when you ask “look, give it to me straight: is this a policy change or a negotiating posture?” As Sky’s deputy political editor Sam Coates spotted, that ambiguity holds all the way to the relevant legislation’s explanatory notes. The government says:

We will continue to talk with the EU but we will not let that stand in the way of protecting peace and stability in Northern Ireland. As any responsible government would, we will take the steps necessary to protect all dimensions of the Belfast (Good Friday) agreement and meet our obligations under the New Decade New Approach Deal to protect Northern Ireland’s place in the UK internal market.

As readers of Trade Secrets will know (and if you’re not already signed up to trade specialist Alan Beattie’s weekly newsletter, there’s never been a better time to start), the annual British capitulation in the Brexit talks has had an unbroken streak since 2018. I’m not particularly convinced that 2022 will be any different. With double digit inflation, the Russian invasion of Ukraine, and rising interest rates in the backdrop, it doesn’t feel likely to me that the UK government will really decide now is the time for a trade war with the EU.

Of course, the other big story in the Queen’s Speech is what’s missing. We didn’t hear anything resembling meaningful action to ease the economic pressure on households created by mounting inflation.

As I’ve written before, that’s not an oversight: the government’s plan to tackle inflation is that UK households will become worse off in order to fix the long-run problem. The political problem this creates for ministers is that when they are on TV or radio, they are left sounding like Marie Antoinette. But the bigger problem this creates for Johnson in particular is that the prime minister doesn’t like delivering bad news. That means he freelances — as he did yesterday, by going off the government’s message to deliver a more upbeat and positive line than government policy supports.

Several in the government think it needs to act now to help households, rather than doing as the chancellor hopes to do and wait it out. I think it’s safe to assume there will be some kind of mini-fiscal event this side of the summer recess.

Mistakes, I made a few

A reader question from Adrian:

What happened to your prediction of 220 local government seats lost for the Tories?

Viewed one way, my prediction performed very well, in that the Conservatives did, in fact, lose 220 local government seats across the UK. Viewed another, more accurate way, my prediction did very poorly, because the Tory party did much worse than I thought, losing almost 500 seats in total.

As other eagle-eyed readers of Inside Politics have pointed out, this was well beyond the 400 figure that I said would be an unalloyed catastrophe for the Conservative party. So, one possible answer is that I am underestimating the political position of the Labour party and the weakness of the Conservatives.

In his analysis for Prospect magazine, the Oxford university psephologist Stephen Fisher argues that Labour did much better in the local elections than the media narrative suggests. He calculated the projected national share (PNS), which is used by the BBC to model what the vote share would have been had there been contests across all UK local authorities and not just in patches. So the PNS is an estimate of how well the main parties would do in a GB-wide general election, if voters across the country as a whole had behaved in the same way as those who actually voted in the local elections that year in England.

Fisher says that Labour’s seat tally is better than it looks considering how well they did in 2014 and 2018, when these seats were last contested, and that they are making steady and meaningful process towards a return to office:

Not only has Labour bounced back a long way in the past 12 months, but it has actually bounced back further in communities that voted Leave. The continuing strength of the Tory vote in these areas has blinded some commentators to this, and further confusion is caused by reliance on a baseline from 2018, a point when the Brexit realignment still had a long way further to go. But insofar as Labour is concerned, that realignment may have now run its course, and appears to be starting to unwind — which could be as good for its prospects as the original realignment proved to be ruinous.

But another explanation can be found in my own ballot paper last Thursday in Hackney: in my own ward of Stoke Newington, just one Liberal Democrat candidate stood, despite there being three seats up for grabs.

Given that the polls — which last week’s elections suggest are broadly right at the moment — show that the second preferences of Liberal Democrat voters are heavily split in favour of Labour (and vice versa), the net effect of having only one Lib Dem candidate will have been to boost the performance of the Labour party candidates. Now, this doesn’t matter all that much in Hackney, where barring some kind of earth-shattering political event, the Labour party was always going to win.

But this story played out across the country, with Lib Dems not standing in seats where Labour faced challenges from the Conservatives or where Labour hoped to gain seats from the Tories, while the Lib Dems, too, benefited from the absence of Labour candidates in some seats. This arrangement helped both parties.

Now, I’m not saying that the gains made by Labour and the Lib Dems weren’t real. Indeed, the two parties do compete with one another in seats across the country. But the fact that they do have something resembling an alliance — if not quite a full-fat pact between parties — explains why Conservative losses were so large.

While I’m not saying it would have been in the top 10 biggest problems had Marine Le Pen won the French election, one thing preoccupying me was that I might not be able to eat at Accents table bourse, my favourite Paris restaurant, again. That’s one reason why I chose it as the venue for my fantasy dinner party in FT Magazine a few weeks back. I hope to visit relatively soon: let me know where else I should eat while I’m there.