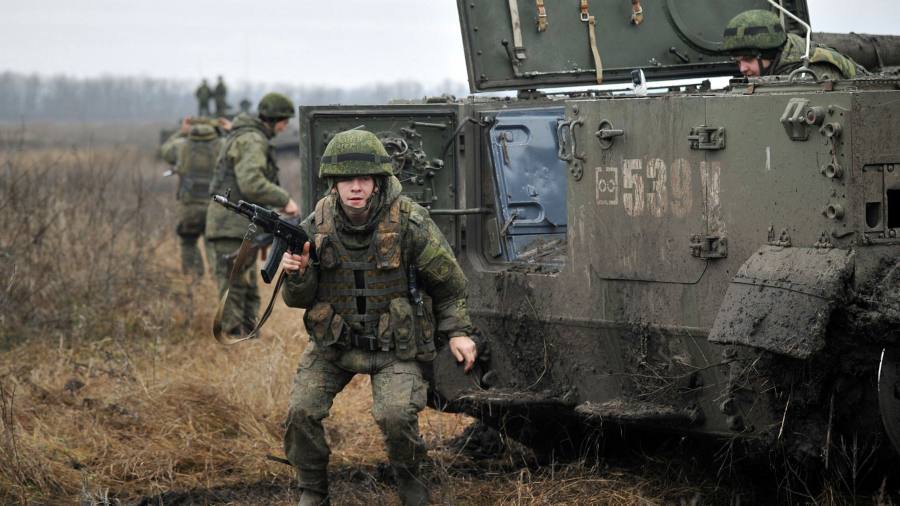 Agreeing to talks with a belligerent power threatening to invade another country will inevitably be seen as a reward for intimidation. But the US and its Nato allies have no choice but to engage with Russia in a series of meetings this week to try to avert a conflagration in Ukraine, even if it feels part of a Kremlin protection racket. There may even be scope for compromise that would address some of Moscow’s purported security concerns and avert the threat of full-scale war. Whether Russian president Vladimir Putin is at all willing to engage in good faith is another question.

Last month, Russia published its demands for a comprehensive rewriting of the European security system in two draft treaties, with the US and with Nato. Russian officials followed up with a barrage of threatening ultimatums. In both style and substance, this was no way to initiate talks. The texts contain far-fetched and one-sided demands that run counter to the founding principles of post-Cold war European security, including each country’s right to choose its own foreign policy. The western allies could never accept these demands and Moscow knows it.

Putin is fixated on stopping further enlargement of Nato. He claims that by expanding, the alliance betrayed assurances given at the end of the cold war — never mind that Russia acquiesced when it settled its own relationship with the organisation in 1998. For Moscow, keeping Ukraine out of Nato is central to its centuries-old insistence on creating a buffer zone on Russia’s borders.

But explicitly to deny Nato membership to Ukraine, let alone Sweden or Finland, would contravene Nato’s founding treaty. Its members will not unanimously agree to change it. Nor should they reward Russian bullying. There is no appetite to bring Ukraine in at this stage, but it would be naive to think ending Kyiv’s Nato aspirations would end Russian destabilisation of Ukraine.

US and European officials are rightly determined that these talks cannot be defined by Russia’s red lines. They will counter with their own. Russia’s violation of territorial integrity, denial of the right of nations to choose their own destiny, repeated aggression against Ukraine and destabilisation in various ways of other western democracies must all be on the table. The challenge for diplomats on both sides will be to identify areas of common ground within this melee that could serve as the basis for further talks and eventually structured negotiations.

Fortunately, there are some, even if it means reinventing some of the treaty provisions that Russia has violated or neglected in the past. Russia’s lopsided demand that it and the US refrain from deploying ground-launched, intermediate-range missiles outside their national territories could be the basis for talks to replace the 1987 treaty on such weapons which collapsed in 2018 after Russian violations. Russia and Nato could explore new controls on conventional force deployment and exercises and agree to renewed transparency and communications. Nato has ruled out creating “second-class” members where it could not station troops. But it might conceivably reconsider deployments in frontline countries if Moscow made peace with Kyiv and accepted limits on placing its own forces or arms in Belarus or Kaliningrad.

Progress will require goodwill on both sides and Russia shows none by holding a gun to Ukraine’s head. Russian de-escalation along Ukraine’s borders is a prerequisite for any substantive negotiations. Putin may have every intention of walking away and using the failure of talks as a pretext for attack. The west must hope for the best from its diplomacy while preparing for the worst by underlining its readiness to impose tough sanctions and to bolster Kyiv’s defences.