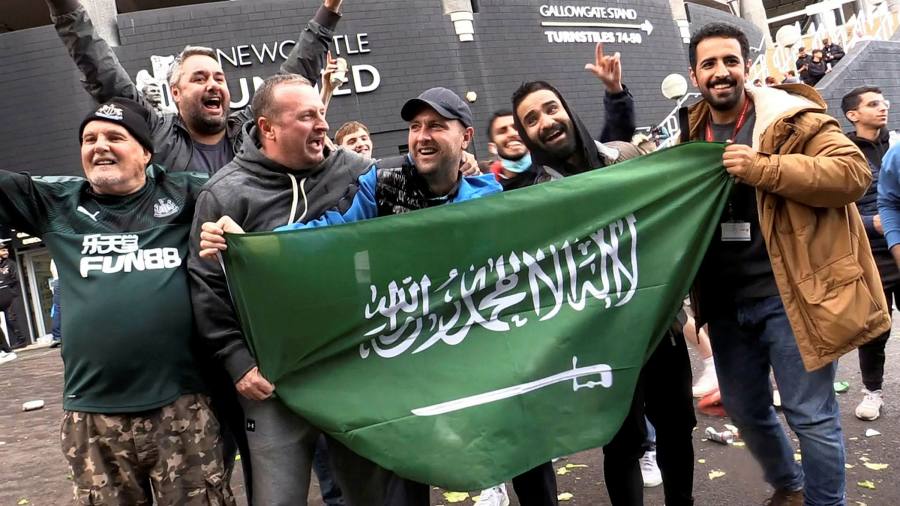 In John Osborne’s 1957 play The Entertainer, the fading old music-hall performer Archie Rice becomes the symbol of a fading old Britain. Rice boasts, pathetically: “I’ve played in front of them all. The Queen, the Duke of Edinburgh, the Prince of Wales, and the . . . what was the name of that other pub?” Anyone wanting to portray Britain today would use another image: a failing cash-strapped football club, which has won nothing for decades, selling its last remaining asset, its heritage, to a rich murderous foreign dictatorship. The £300m sale of Newcastle United to a consortium led by Saudi Arabia’s sovereign wealth fund has been treated as an emblem of English football’s moral descent. But why single out football when the malaise is national?

Whereas American robber barons used to buy newspapers and endow art museums, today’s sheikhs and oligarchs buy status through football. Rulers of states have been getting into the sport since 2008, when Abu Dhabi’s royal family took over Manchester City. Saudi Arabia was late to this game, watching in envy as its enemy Qatar sportswashed its reputation. The mini-state was chosen to host the World Cup 2022, and bought Paris Saint-Germain, where it has collected trophy footballers including Lionel Messi himself.

The Saudis tried various routes into football. In 2018, Saudi and Emirati money was central to the offer of $25bn — fronted by Japanese tech conglomerate SoftBank — to create two new international tournaments, a revamped club World Cup and a global Nations League. Fifa’s president Gianni Infantino correctly called it “the — by far — highest investment football has ever seen”. But the plans failed, as did Saudi Arabia’s attempt to grab a slice of Qatar’s World Cup.

That left Newcastle. Amanda Staveley, the British financier who helped broker the takeover, ludicrously argues that sportswashing isn’t buying a club threatened by relegation. In fact, sportswashing is using oil money to turn around a club threatened by relegation so that people come to associate your country’s name with footballing success rather than, say, the bonesaw murder of the journalist Jamal Khashoggi.

Anyone surprised that Britain welcomes such shady money hasn’t been paying attention. Just take a walk around Mayfair or Kensington. London today overflows with wealth managers, libel lawyers, estate agents, public relations advisers, luxury-goods sellers, public-school headmasters and art dealers, some of whom make their living servicing rich criminals. These enablers see themselves as neutral, highly skilled professionals who (most of the time, anyway) work within the law. There’s a reason why Roberto Saviano, the Italian expert on the mafia, calls Britain “the most corrupt country in the world”.

The rot goes all the way to the top. Just look at the photograph last year of former prime minister David Cameron, sitting in a tent dressed, incongruously, in a suit, on a camping trip with his then business partner Lex Greensill to woo Saudi Arabia’s crown prince Mohammed bin Salman.

Then there’s the more than £20 billion in arms — as calculated by the NGO Campaign Against Arms Trade — sold by Britain to Saudi Arabia since the Saudis began their war in Yemen in 2015. In 2016, Boris Johnson backed the arms sales against opposition from MPs. Of course, other western countries happily sell arms to the Saudis too.

Most of Newcastle’s fans seem equally unbothered by Saudi Arabia’s abuses against women, political prisoners, Yemenis, Khashoggi and others. They are just pleased that MBS might buy them some trophies. The comedian Mark Steel joked: “If Isis had been smart, instead of blowing stuff up, they’d have bought our football clubs. Then most people in the country would praise them as heroes and saviours.”

None of this is inevitable. In the 1970s and 1980s, much of British business and sport belatedly joined a boycott of apartheid South Africa. Germany now bars outsiders from buying majority stakes in its football clubs. But don’t expect today’s Britain to choose those paths.

Welcoming dirty money is likely to remain national policy, especially after Brexit has dented foreign direct investment. In an ancient, low-skill, low-productivity country, the main thing that foreigners want to buy is heritage, from country houses to football clubs.

Newcastle is alluringly old (founded in 1892 — 40 years before Saudi Arabia) and comes equipped with the requisite Latin motto, “fortiter defendit triumphans”, or “triumphing by brave defence”. Given the club’s traditionally leaky defence — 16 goals conceded in seven matches this season — it might want to change that to something more appropriate. What about “pecunia non olet”, or “money doesn’t smell”?