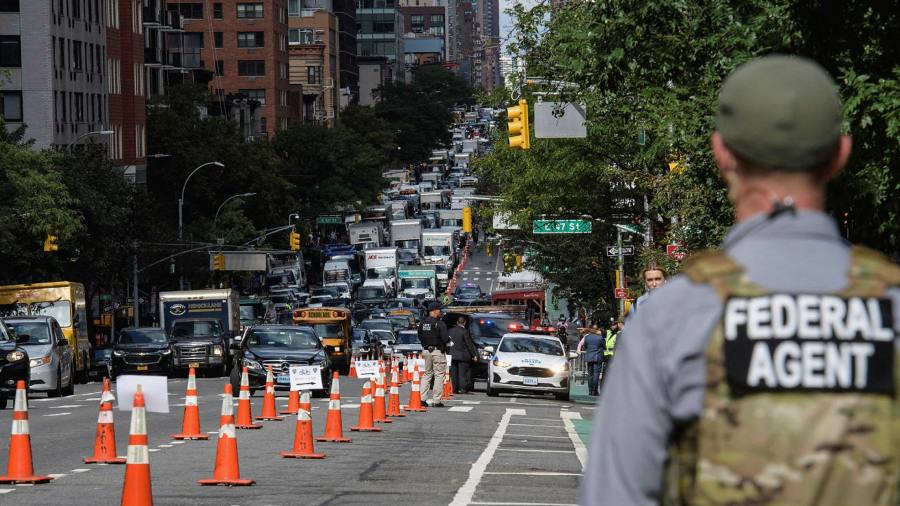 Sign up to myFT Daily Digest to be the first to know about New York City news.

The UN General Assembly convened in New York this week with negotiating deadlocks in the building accompanied by traffic gridlocks outside. The annual jams once even forced private equity tycoon Stephen Schwarzman to ride the subway to appointments.

Holding a meeting of world leaders on a densely populated island makes little logistical sense. But the annual spectacle may become a little more serene in years ahead. In 2019, New York legislated to introduce congestion pricing in Manhattan. Motorists in the crowded business districts below Central Park will pay for the privilege of accessing its streets.

Other large cities, including London, have relied on such levies to raise revenue and encourage cycling and walking. The initiative seems more salient than ever in the Big Apple. Motor traffic has recovered to pre-pandemic levels even as mass transit continues to lose riders.

Implementation has stalled, however. Some drivers, “bridge-and-tunnel” commuters included, believe creeping delays will keep driving in Manhattan free of charge, if not of aggravation.

Getting to Manhattan itself can be costly. The Queensboro Bridge is free to traverse. But the Lincoln Tunnel which connects New Jersey to Midtown costs as much as $16 to enter. Other entry points have intermediate levies. With traffic speeds in Manhattan at peak gridlock averaging just above six miles per hour, it is undeniable that drivers are avoiding the full costs of traffic.

City authorities have not even worked out the details of charging and its exemptions yet. Naturally, those commuting to Manhattan by car are not thrilled by the prospect of paying two sets of tolls. A 16-month “environmental review” mandated by the federal government is under way. This feels like foot-dragging to New Yorkers impatient for the new regime to be implemented.

In recent days, subway ridership has exceeded 3m people, the highest levels since the pandemic started. Still, those figures are 50 per cent below 2019 figures.

Auto traffic has seemingly returned as strong as ever. In June, 1.6m vehicles passed through the Lincoln Tunnel, slightly higher than its 2019 level. New Yorkers, anecdotally, see streets jammed on days and at times that were previously quiet.

Tolls and charges tend to be regressive. The authorities — drawing on the experiences of other big cities — should be able to design a scheme that protects vulnerable New Yorkers. They have a lower chance of getting buyout bosses through subway turnstiles.

The Lex team is interested in hearing more from readers. Please tell us how New York should structure congestion charges in the comments section below.