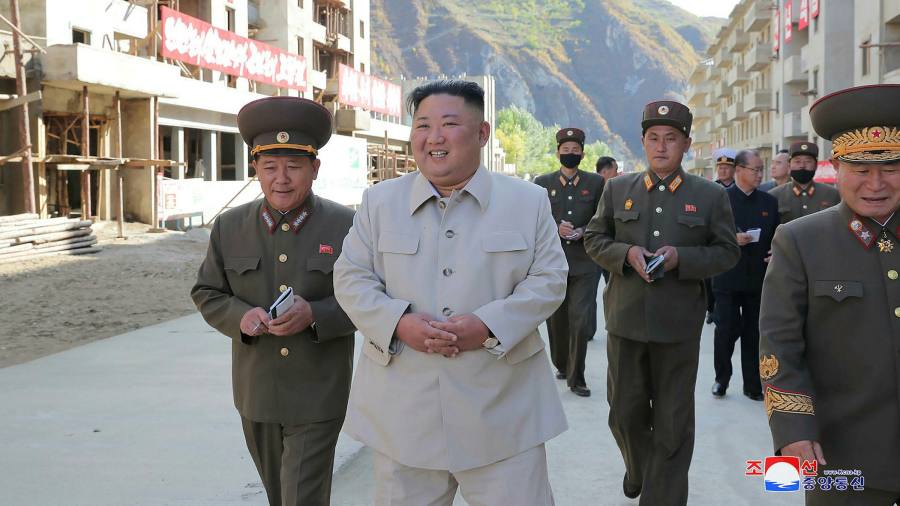 Dozens of North Korean officials gathered in a seminar room in the country’s foreign ministry in Pyongyang last October to hold a training session over Zoom on “green growth”.

The session, jointly organised by North Korea’s ministry of land and environment protection and a German foundation with ties to Bavaria’s conservative Christian Social Union, was part of a lecture series designed to educate officials on environmental issues.

“It’s a novel approach, and they are very interested,” said Bernhard Seliger, director of the Korea office of the Hanns Seidel Foundation.

“We have held a discussion on biological pest management, and a discussion with a British expert on forest certification, but the session on green growth was at the North Koreans’ request.”

A serial violator of international law and human rights, North Korea’s reclusive regime typically eschews engagement with the international community in favour of bombast and subversion.

But having been devastated in recent decades by a series of extreme weather events, and almost completely dependent on outside money and knowhow, Pyongyang has proved itself willing to engage on a host of environmental issues, including the global fight against climate change.

“There is no other area in which North Korea wishes for and pursues international co-operation with such a proactive and open attitude as it does on environmental policy,” said Choi Hyeonjung, director of the Center for Global Governance at the Asan Institute for Policy Studies in Seoul.

North Korea is party to international treaties on environmental protection and global action on climate change, including the Vienna Convention for the Protection of the Ozone Layer, the UN Framework Convention on Climate Change (UNFCCC), the 1997 Kyoto protocol and the 2016 Paris Agreement.

As a signatory to the UNFCCC, Pyongyang sent a delegation to last year’s UN climate change conference in Glasgow.

“Climate change is one of the few areas where we can talk to the North Koreans without rancour, or without there being an ideological edge,” said a senior western diplomat.

“Of course there’s a lot of money available for poorer countries, and they are interested in that — but they are also genuinely concerned about the impact that climatic events have had on them.”

The regime’s interest in environmental policy can be traced back to the 1990s, when catastrophic floods and landslides, exacerbated by decades of deforestation and poor land and river management, sparked a famine that killed millions.

Since then, the country has been battered by increasingly frequent natural disasters, including four big typhoons in 2020. Droughts and floods often threaten crop yields and infrastructure, worsening chronic food shortages.

Kim Jong Un, the North Korean leader, has waged “a war to improve nature”, including a clutch of land management reforms and a reforestation campaign.

Kim, who described Donald Trump’s decision in 2017 to withdraw the US from the Paris Agreement as the “height of egotism”, called last year for “urgent action” on climate change, which he described as a “danger” that had become “higher in recent years”.

Choi pointed out that “the destruction of North Korea’s land, nature and ecosystem is more a product of the regime’s policy failures than a direct result of climate change. But climate change and aberrational weather have made things worse, while the country’s inability to prevent, withstand or rebuild after these events makes it exceptionally vulnerable.”

The parlous state of the North Korean economy since the 1990s means that despite its reliance on coal, its contribution in absolute terms to global carbon dioxide emissions is modest.

North Korean emissions of CO2 fell 43.1 per cent between 1990 and 2011, according to the International Energy Agency, a drop driven by a collapse in energy consumption.

The country received millions of dollars in UN funding between 1997 and 2014 for projects ranging from small wind energy developments to improving seed production for sustainable agriculture.

In the late 2000s and early 2010s, it registered a series of hydro power projects under the UN’s clean development mechanism, a carbon offset scheme that allows developing states to sell carbon credits to richer countries.

But observers said that the regime faced near-insurmountable challenges, not least the impact of international sanctions in response to the country’s nuclear weapons programme and an extreme lockdown imposed by Kim to control the coronavirus pandemic.

“Environmental policy may be a priority of the North Korean government, but it is not a top priority,” said Gabriela Bernal, a researcher at the University of North Korea Studies in Seoul.

“North Korea does not have money or the equipment for the environmental investments it needs to make. It finds it difficult to bring in foreign currency due to sanctions, and foreign diplomats, NGOs and aid workers were forced to leave during the pandemic.”

Peter Ward from the University of Vienna said that the fight against climate change would probably make the North Korean regime even poorer.

“One of North Korea’s main sources of foreign currency is the export of coal, which is precisely what the international community is trying to phase out,” Ward said.

In a 2021 review of its contribution to the UN’s Sustainable Development Goals, North Korea said that it plans to make a 15.63 per cent reduction in greenhouse gas emissions by 2030, rising to a 50.34 per cent reduction were it to receive international assistance.

“In my experience the environment really is important to the North Koreans and their national identity,” said David von Hippel, a senior associate at the Nautilus Institute in California who has worked on renewable energy projects in North Korea.

“But as long as the security situation remains as it is, few of the measures the country needs to reduce its dependence on coal are likely to come to fruition.”