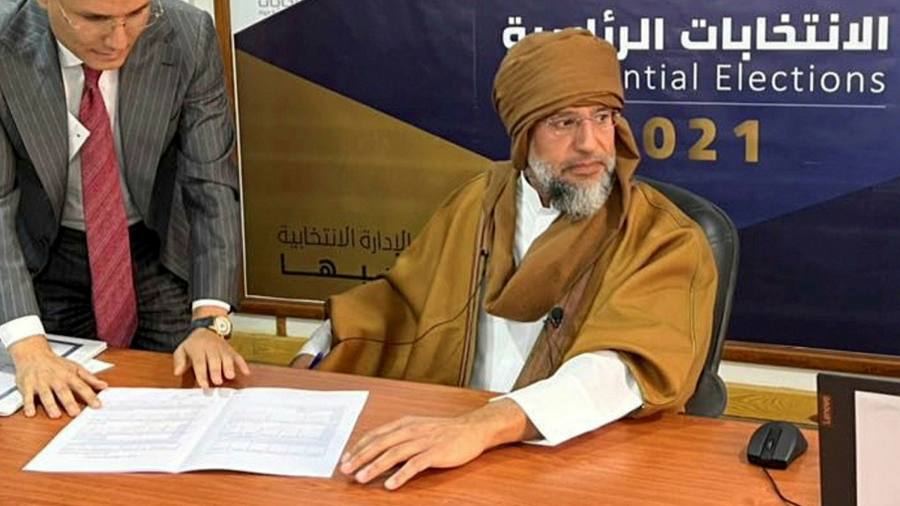 Many Libyans who survived the 42-year tyranny of Muammer Gaddafi may have done a double take at the weekend, watching footage of a brown-turbaned man looking uncannily like him signing papers to register for elections in Libya due next month. The apparition was his son, Saif al-Islam Gaddafi. The ageing princeling, now 49, has been mostly out of sight since he was caught trying to escape the country after his father was hunted down and killed in 2011 following a Nato-backed rebellion that toppled his regime.

Libya has since been torn apart by civil war and tribal rivalries. Many of those same Libyans, at home and scattered to the winds, may now wonder: to what conceivable question could Saif al-Islam be the answer?

There was a time, in the nineties and noughties, when American and European officials — mistrustful of Arab democracy and at a loss for alternatives — alighted on a policy of cultivating the sons of local despots. Touted as modernisers, they were often better educated and groomed than their progenitors; so was Michael Corleone. Examples such as Bashar al-Assad and Gamal Mubarak, sons of Hafez al-Assad and Hosni Mubarak, the presidents of Syria and Egypt respectively, suggest this strategy was not a great success.

But a lot of people invested a lot of time in Saif al-Islam, believing he would open up the oil-rich north African country from the nightmarish police state created by his father, who eviscerated Libyan institutional life under his ersatz Jamahiriya, a neologism colliding the Arabic words for people and republic.

His neighbours found Gaddafi more and more wilful and hard to handle. He turned up in Cairo once for an Arab summit and pitched his desert encampment in the middle of the city. Changing costumes like a chameleon, this master of political repertory still found time to pose on a hotel staircase, looking like a cross between a wizened rock star and Ozymandias.

Saif al-Islam attracted many hopeful looks. Increasingly feted in western and Arab capitals as a reformer, he was nowhere more fairy-dusted than in London, where he was welcomed into high society. In 2008 he acquired a PhD from the London School of Economics titled “The role of civil society in the democratization of global governance institutions”, parts of which were later alleged by critics to have been plagiarised or ghostwritten.

I saw him around then at a lunch in the Café Royal in London, on a raised dais flanked by grandees and mandarins, looking genially through his spectacles at the assembled guests as he was proffered as a portent of the future. That mask dropped at the outset of the 2011 rebellion against his father, one chapter in the chain of regional upheavals then known as the Arab spring. He threatened his countrymen with “rivers of blood”, promising to “fight until the last man, the last woman, the last bullet”.

Since then he has been convicted of war crimes and sentenced to death in Tripoli in 2015 and is still pursued for the same reason by the International Criminal Court at The Hague. Held throughout by militiamen in Zintan in the western mountains, he seems to have paid his way back into the game. But what is the game?

After the west walked away from post-Gaddafi Libya and left tribal paramilitaries and jihadis to fill the vacuum, powerful external actors entered the fray, with Egypt, the Gulf and France backing Khalifa Haftar, a renegade Gaddafi commander and warlord, whose attempt to reconquer the whole country has failed. President Emmanuel Macron of France, for whom north Africa and Syria are the main locus of Europe’s migration nightmares, seems inclined to back strongmen as bulwarks. Arab leaders are rebuilding fences with Assad, who actually shed the blood the Gaddafis promised to spill. What better time to resurrect Saif al-Islam?

The December elections, if they happen, are unlikely to unify Libya. It would also be impossible to recreate his father’s theatrical regime, backlit by bombast and buffoonery. One veteran of the region, whose country has irons in the Libyan fire, says Gaddafi junior is “a charlatan”, whose real role is to “clear the path for Haftar”. It does not look like that’s his plan.