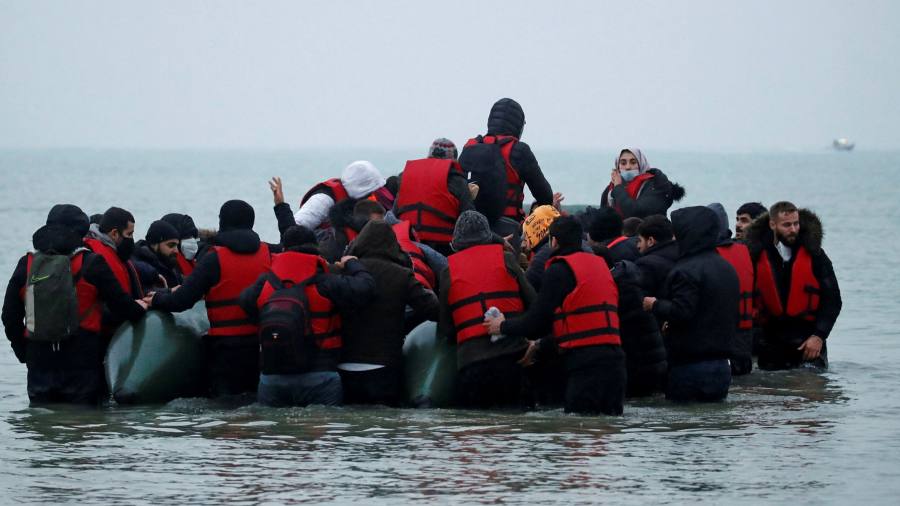 More than 30 people have drowned during an attempt to cross the English Channel from France in the worst accident in a surge of clandestine small-boat crossings that have frayed relations between French and British authorities.

French officials said they were alerted to the disaster by the crew of a fishing boat who saw people in the sea in the Dover-Calais strait.

Gérald Darmanin, France’s interior minister, said 31 people had drowned after the migrant boat capsized, including five women and a girl.

Boris Johnson said he was “shocked, appalled and deeply saddened” at the deaths and said that efforts to stop the crossings “had not been enough”.

The UK prime minister added that people smugglers were “getting away with murder” and the UK was eager to work with the French government to do more. “That is the offer we are making,” he said.

Emmanuel Macron, France’s president, urged more co-operation in the EU and with the UK to combat people trafficking gangs.

“France will not allow the Channel to become a cemetery,” he said. “Europe and its deep respect for humanity is in mourning.”

Macron added that there was a need to accelerate efforts to break up criminal gangs with the help of the UK, Belgium, Germany and the Netherlands.

Natacha Bouchart, the mayor of Calais, blamed Britain. “The British government is to blame,” she said. “I believe that Boris Johnson has, for the past year and a half, cynically chosen to blame France.”

The UK and France have had bitter exchanges for years about the numbers of migrants, many from the Middle East and Afghanistan, seeking to reach the UK from France.

London has accused France of failing to stem the flow of migrants from the French side of the Channel, while Paris has blamed the UK for its lax approach to migration and said that new arrivals were frequently able to work illegally in Britain.

Tempers had cooled in recent days after a call between Darmanin, and Priti Patel, UK home secretary, and the dismantling of a camp of hundreds of migrants near Dunkirk by French police.

The number of people to have claimed asylum in the UK after crossing the Channel in boats has reached 25,700 for this year so far, more than three times the 8,469 total for all of 2020.

There have been numerous reports of individual deaths. French officials reported at the weekend that 31,500 migrants had left the French coast for England since the start of the year.

Of those, 7,800 had been rescued and seven had died or disappeared. Decathlon, the sports and clothing retailer, said it had stopped selling kayaks in Dunkirk and Calais because they were being used for dangerous crossings.

Two helicopters, one from France and one from the UK, and three French vessels were taking part in the continuing rescue operation on Wednesday.

The French interior ministry this week said it was deploying €11m of new equipment, including all-terrain vehicles, fast boats and night vision sights, under its agreement with the UK to stop migrant crossings.

Smugglers this year have started using larger inflatable boats, to fit more migrants into a single crossing. They have also begun launching from a wider range of beaches, sending migrants on longer, more dangerous crossings to evade the French authorities’ attempts to stop them.

Jean-Marc Puissesseau, president and chair of the ports of Calais and Boulogne, said the UK and EU needed to work together to find a solution to migrant boat crossings.

“All Europe and the UK, we must all try to find a solution because there will be more.”

Small-boat migration has replaced previous clandestine methods of reaching the UK, such as hiding in trucks, since scrutiny on those routes has been stepped up.

There were numerous small-boat crossings amid very calm weather in the Channel on Wednesday.

Wednesday’s accident is the worst tragedy since small-boat crossings became a significant means of clandestine migration to the UK about three years ago. The previous worst single incident involved the drowning of four members of an Iranian Kurdish family off Calais in October last year.