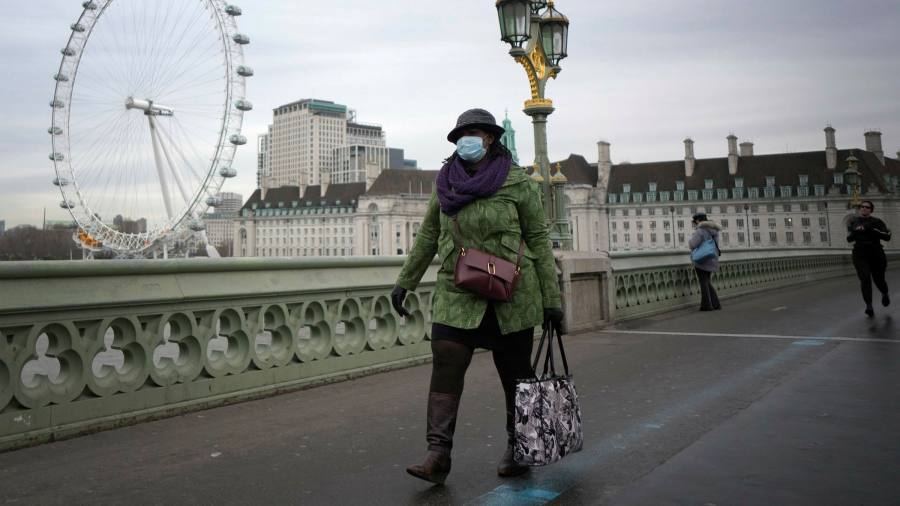 Ministers are increasingly optimistic that many of the restrictions to prevent the spread of coronavirus will end in England on January 26, as internal data suggest the health service is unlikely to be overwhelmed by the spread of the Omicron variant.

Coronavirus case numbers have fallen in all regions and among all age groups in England in the past week. On Monday, 142,224 cases were recorded across the UK, down 10 per cent on the 157,758 cases reported on the same day last week.

Boris Johnson, UK prime minister, introduced his so-called “Plan B” measures last month as the new strain spread rapidly across the UK; it included guidance to work from home where possible, masks for all indoor settings and vaccine passports for major events.

Scotland, Wales and Northern Ireland mirrored his decision with similar measures, but later went further with limits on indoor socialising and large gatherings.

Michael Gove, levelling up secretary, on Monday said the country had to learn to “live with Covid” and admitted he was wrong to advocate within government for further restrictions.

Gove told the BBC that Johnson’s decision to resist more measures was correct. “His judgment has been vindicated. He argued publicly that we would be able to get through this with the booster campaign.”

One government insider said “optimism is growing” that the measures will come to an end in just over two weeks. “Cabinet was presented with data where everything seems to be going in the right direction.”

Another official close to the process said: “People are viewing January 26 as a waypoint for relaxing rather than maintaining the status quo or ramping up.” The person added that the government was “working on the basis” that measures would end.

But a senior Whitehall official cautioned that it was “too soon” to definitively say whether the restrictions would come to end, but added that “the data isn’t currently tracking towards worst-case outcomes”.

The Plan B measures have a sunset clause that will see them legally cease on January 26. If Johnson seeks to renew them, he would be required to return to the House of Commons for another vote.

Mark Harper, chair of the Covid Recovery Group of lockdown sceptic Tory MPs, told the Financial Times that the prime minister would face a bigger revolt than when the measures were introduced if he seeks to extend them. “I think there will be even more people against it,” he said.

One government insider admitted “political pressure will shape the agenda” on coronavirus restrictions.

Johnson said ministers were also considering whether to reduce the Covid-19 self-isolation period from seven to five days following widespread staff shortages across the UK economy.

He told reporters there was an “argument to be had” about the length of isolation but the government would follow official advice. “We are looking at that and we will act according to the science.”

But some debate remains over whether Covid cases have peaked. Last week, the Office for National Statistics infection survey estimated infections had only started falling in London before year-end.

Weekly hospitalisations were down 16 per cent in the capital in the week ending January 8. But nationally, Covid admissions increased 5 per cent week on week, with 14,017 admissions recorded, rising by more than 20 per cent in the north of England. Greater Manchester has already surpassed its peak from last winter’s wave.

“If we are very clearly past the peak in two weeks, then I would be surprised if the government wanted to maintain any restrictions but we do need to realise the longer and slower we take to come down from the peak, the longer and slower the NHS recovery from the pandemic will be,” said Matthew Taylor, chief executive of the NHS Confederation, which represents healthcare organisations.

Meanwhile, the government has contacted companies in critical sectors to draw up a list of some 100,000 workers who will have to take lateral flow tests every working day. But it has not yet announced a list of which workers fall under the new scheme, which was due to start on Monday.