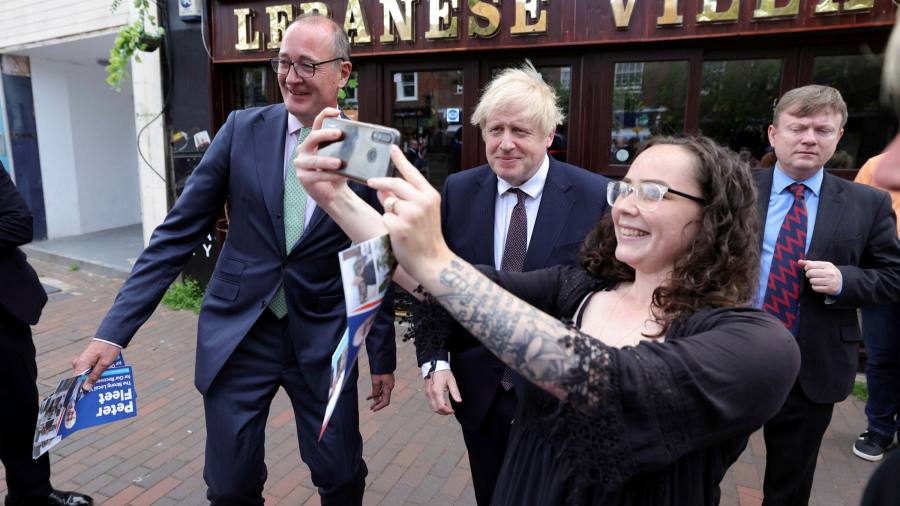 For a man who has never put so much as a toe in the UK’s House of Commons, Nigel Farage’s hold over the Conservative party is exceptional. The ardent Brexit campaigner has returned to frighten Boris Johnson; the prime minister’s allies reckon the right flank is where he is most vulnerable. “The old enemy is rearing his head,” one frowns.

Johnson’s government is engulfed with panic over small boats crossing the English Channel. Senior Tories are alarmed at the numbers of asylum seekers making the perilous journey to Britain, and fear the government’s failure to address this will encourage Farage back into politics. Pondering the question earlier this week, the former Brexit party leader promised: “I will have to give it some serious thought.” If Farage campaigned against Johnson on controlling borders, the Tories risk a return to the fractured rightwing vote of the David Cameron and Theresa May era. But if Farage opts to remain a TV host, Johnson can relax. Richard Tice, Farage’s successor as head of the Brexit party, now known as Reform, has shown scant campaigning success.

While Farage and small boats are grabbing the most attention, another revolt on the right should not be Johnson’s chief fear. The bigger electoral challenges come from the fragile economy — rising inflation and interest rates, plus sluggish growth — and his seeming lack of governing grip, with a threat of winter shortages. Johnson’s policy outlook and style risks losing those voters his party picked up in 2005 and 2010. The battleground which may soon dominate British politics is the set of middle-class, middle-income, middle of the road, middle England seats which voted Tory because they were fed up with Labour. After 11 years in power, the cycle could be about to go into reverse.

The 2005 election is generally remembered for the Liberal Democrats’ vote surge after they opposed Labour’s decision to assist the US invasion of Iraq. But the Tories also gained 33 seats, mostly in the south of England, which set the foundations for their return to government five years later. Some of those seats have already gone — many in and around big cities. Illford North on the outskirts of London returned to Labour in 2015, Enfield Southgate two years later, Putney in 2019. Tory strategists fear these areas — and not just the “red wall” of former Labour heartlands in the north — will play a crucial role at the next election.

Rob Wilson, the Tory MP for Reading East between 2005 and 2017, says there has been “a significant erosion of the middle-class vote” in the South East since the Brexit referendum precipitated a “drift away from the Tories” in seats such as his. Changing demographics, including the growing numbers of students and ethnic minorities, have allowed Labour and the Lib Dems to make inroads. “What made it possible for us to win those seats in the first place was reorientating the Tory party to a much more liberal conservatism,” he explains.

But much will depend on the competition to target the Tory Remainers who reluctantly backed Johnson in 2019. Labour, the Liberal Democrats, the Green party, Scottish National party and Plaid Cymru in Wales will all be vying to sway this group — comprising around 19 per cent of the electorate at the last election. Such a six-way split is the Tories’ greatest hope.

But informal non-aggression pacts between Labour and the Liberal Democrats would cause real anxiety for Johnson. Neither party is going to indulge in public deals — as one Tory MP notes, “voters loathe such stitch-ups” — but holding back resources and running paper candidates could prove damaging. One Liberal Democrat official, recalling two by-elections earlier this year, suggests this is already happening. “We held our fire in Batley and Spen and Labour repaid the favour in Chesham and Amersham. We beat the Tories in both instances; it’s a model for what we need to do in 2024.”

Whispers in Westminster suggest discreet discussions are taking place on future agreements in this vein. Legally and politically, it is complex. Yet if the Tories’ opponents forge a common strategy to counter them in prosperous southern England, Johnson faces a greater threat than whatever Farage does next.