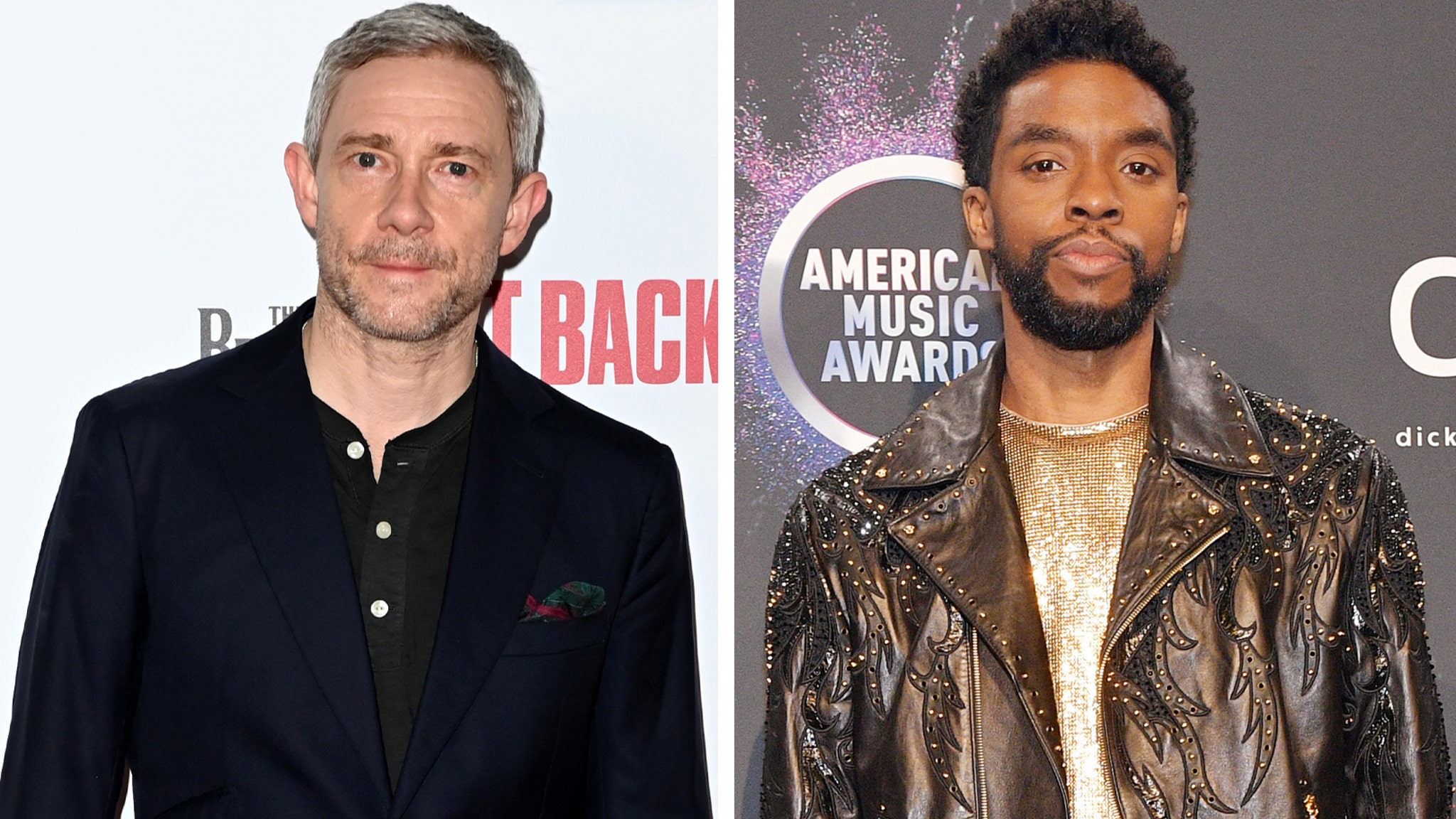 “There’s also no question that, at the heart of it, there’s quite a gap now, and you felt it.”

Martin Freeman is opening up about shooting the “Black Panther” sequel, “Black Panther: Wakanda Forever,” without the late Chadwick Boseman.

While speaking to Collider last week, the actor said it was “strange” and “odd” filming the Ryan Coogler-directed sequel sans Boseman, sharing that he felt the late actor’s absence during the shoot.

The actor — who famously brought the Marvel character of Black Panther (T’Challa) to life — passed away in August 2020 at the age of 43 following a private battle with colon cancer.

“It was strange, that side of it. On the one hand, you’re making the film that you’re there to make, and there are scores and scores of people on set, joined in this endeavor to make the film,” began Freeman, who returns as CIA agent Everett K. Ross in the sequel. “But there’s also no question that, at the heart of it, there’s quite a gap now, and you felt it.”

“With full respect to Ryan Coogler and everybody else, who’s sweating and bleeding to get this thing done properly, it was fun. It was enjoyable,” he continued, adding that he “was in and out of it quite quickly” and enjoys playing Ross, whom he described as “a very fun character to play.”

Elaborating more on shooting “Wakanda Forever” without Boseman, Freeman said, “It was odd. Of course, it was odd with Chadwick [Boseman] not being there. There’s no way around that. I think everyone would find it pretty strange and sad, but at the same time, life things don’t just end. It’s not like, ‘Well, that’s that’s happened, so we just all have to go off and never do it again.’ But it was odd.”

“When he passed, I thought, ‘Okay, well maybe there just won’t be another one,'” he recalled. “But there are still other stories to tell within that world and other great characters. I think, and I hope that we’ve made a good film. I trust Ryan Coogler a lot.”

Marvel previously confirmed in December 2020 that Boseman’s King T’Challa won’t be recast in the upcoming movie. “Honoring Chadwick Boseman’s legacy & portrayal of T’Challa, @MarvelStudios will not recast the character, but will explore the world of Wakanda & the rich characters introduced in the first film.”

In addition to Freeman, “Wakanda Forever” will bring back many stars from the first installment, including Lupita Nyong’o, Angela Bassett, Danai Gurira, Leticia Wright, Daniel Kaluuya and Winston Duke.

Both Bassett and Nyong’o have spoken about the highly-anticipated sequel, and like Freeman, what it was like shooting the movie without Boseman.

While appearing on “The Ellen DeGeneres Show” last month, Bassett — who stars as Ramonda, the mother of T’Challa — described Boseman as “such an example. Such a leader, amazing talent, we all know that. Big heart, great intellect, and we hope to just raise his standard.”

Meanwhile, in April 2021, Nyong’o spoke to Yahoo! about the script, saying the way Coogler “reshaped the second movie is so respectful of the loss we’ve all experienced as a cast and as a world.”

She added, “it feels spiritually and emotionally correct to do this. And hopefully, what I do look forward to, is getting back together and honoring what he started with us and holding his light through it. Because he left us a lot of light that we’re still going to be bathing in. I know that for sure.”