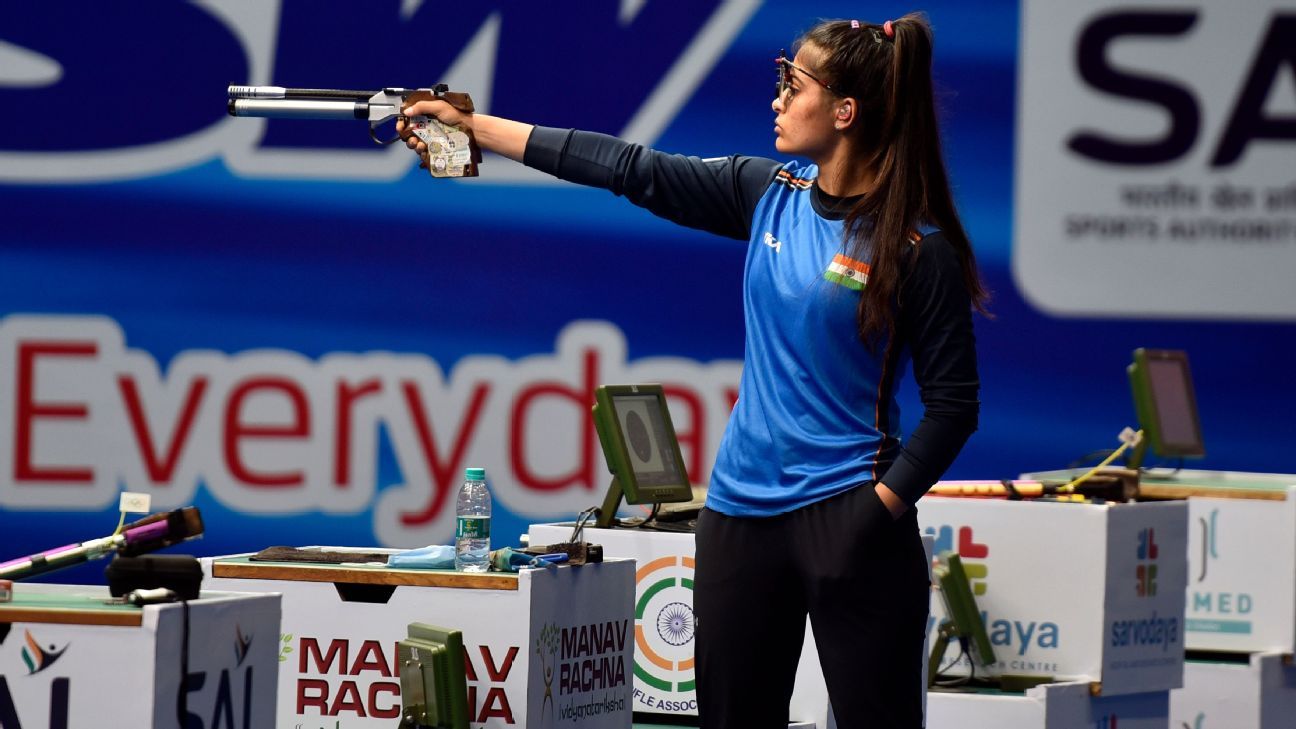 Bhaker won her second gold of the tournament in partnership with Sarabjot Singh in the 10m air pistol mixed team event. She then teamed up with Rhythm Sangwan and Shikha Narwal to win the 10M air pistol women’s team event, beating Belarus 16-12 in the gold medal match.

The trio of Areeba Khan, Raiza Dhillon and Ganemat Sekhon had finished at the top of the podium in the women’s event after winning the final 6-0.

In the men’s section, the Indian team of Rajveer Gill, Ayush Rudraraju and Abhay Singh Sekhon had won the bronze medal after prevailing over Turkey’s Ali Can Arabaci, Ahmet Baran and Muhammet Seyhun Kaya 6-0.

On Saturday, Manu and Sarabjot led an India 1-2 in the air pistol mixed team competition, where they fought off the challenge of the second Indian pair of Shikha Narwal and Naveen 16-12 in the gold medal match.

Earlier in the qualification round featuring eight teams, both the Indian pairs finished 1-2 as well, with Manu and Sarabjot shooting 386 while Shikha and Naveen were a point behind with 385.

In the junior men’s 10m air rifle team event, the trio of Srikanth, Rajpreet and Paarth had also made it to the gold medal match by virtue of topping their six-team qualification round with a combined total of 1886.9. Each shooter shot 60-shots each in the qualification round.

In the final, they beat a strong U.S. team comprising reigning Olympic champion William Shaner, besides Rylan Kissel and John Blanton by a margin of 16-6.

India also picked up another silver medal on the day when the pair of Rajpreet Singh and Atmika Gupta went down fighting to U.S.’s William Shaner and Mary Carolyn Tucker in the 10m air rifle mixed team competition by a margin of 15-17.

Rajpreet and Atmika had finished second behind the U.S. pair in qualification as well with a combined score of 418.5 after 20-shots each. The U.S. pair shot 419.9 to top the eight-team field.

The women’s 10M air pistol team event saw India dominate as they topped round one of qualification with a combined total of 1722 after 180 shots. They shot 569 to Belarus’ 568 to top the second qualification round too. In the final, although it was even at the start, the Indians finished strong to seal the victory.

In the men’s 10M air pistol team event, India were dominant, winning round one and round two before pulling off a tight gold medal match against Belarus yet again.

In the women’s 10M air rifle team event, India’s Nisha Kanwar, Zeena Khitta and Atmika Gupta, topped the first qualification round before finishing second to the Hungarian trio of Eszter Mezaros, Eszter Denes and Lea Horvath in round two. The Hungarians maintained that superiority in the final to strike gold – their first of the competition. It was Atmika’s second silver of the day after medaling with Rajpreet in the day’s first medal event, the 10M air rifle mixed Team. Rajpreet, in fact, also now has one gold and one silver medal in his kitty.

India are leading the medal tally with four gold, five silver and two bronze for a total of 11 medals.