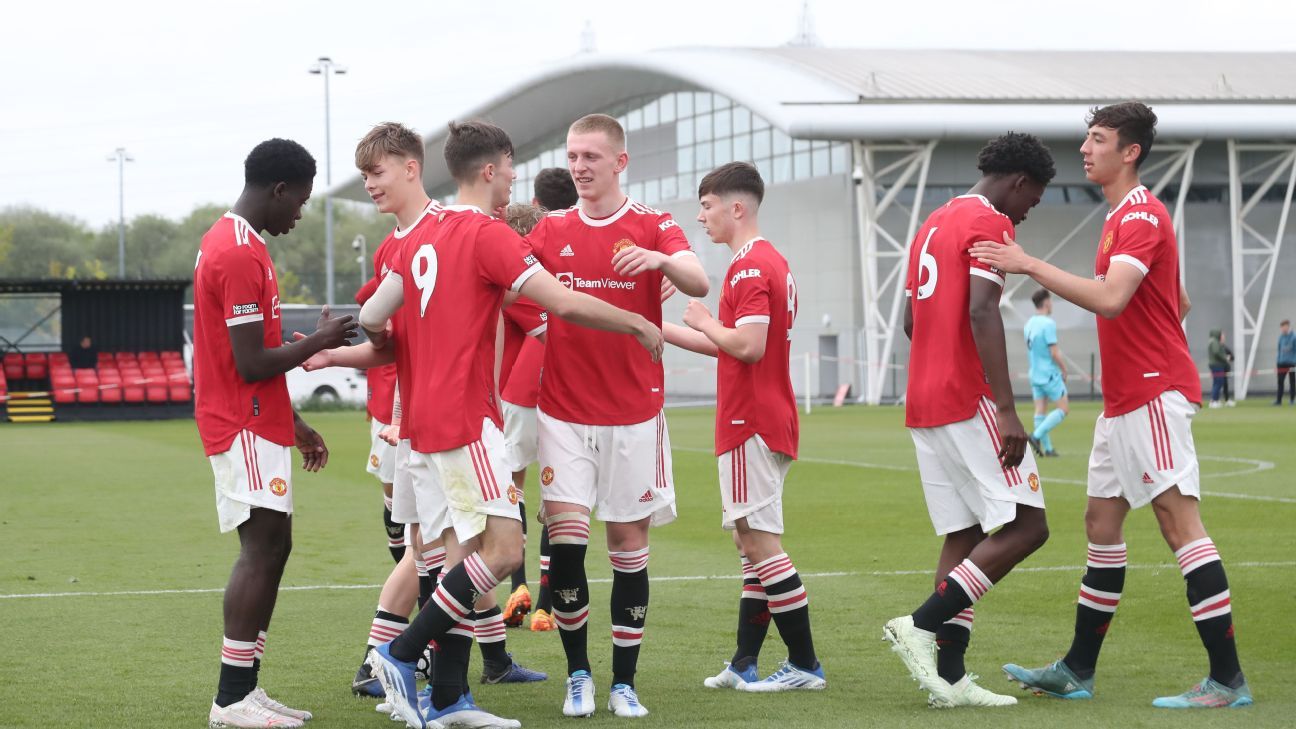 On Wednesday evening, a group of teenagers barely out of school will play at Old Trafford in front of more than 50,000 people. For some Manchester United supporters turning up to watch the FA Youth Cup final, it will be a welcome opportunity to distract themselves from a dismal season watching the first team. For others, it will be a chance to catch a glimpse of the future.

Winning the competition — essentially the FA Cup for youth players — isn’t a guarantee of success in senior football, but if United’s Under-18s beat Nottingham Forest and lift the trophy, they will follow in some famous footsteps.

“When you get to this stage in the competition those previous successes are mentioned and you are compared to those groups a little which is nice for the lads,” said Under-18s coach Travis Binnion. “They can see what sort of careers they have had and the household names they have become. It is nice for the lads to see what is there for them should they continue to improve and develop their games.

“We want to win the Youth Cup, but if five, six or seven of these boys go on to play in the Premier League and be household names, that is a far greater achievement.”

Duncan Edwards, Bobby Charlton, George Best, Ryan Giggs, David Beckham and Paul Pogba all have winners’ medals, and if the latest group were to join them, there’s a fair chance that at least one of the players on show will, at some stage, play a key role for the first team.

United have lifted the trophy a record 10 times, and at least one player from each of those victorious teams has gone on to make 80 or more senior appearances. The Class of ’92, which featured Giggs, Beckham, Gary Neville, Nicky Butt and Paul Scholes, contributed a combined 3,000 appearances and 100 major trophies. The last United team to win it in 2011 included Pogba and Jesse Lingard, both still part of the team in 2022. Tom Heaton, a winner with United in 2003, rejoined the club last summer.

It’s been a difficult campaign for Pogba, Lingard, Heaton and the rest of the first-team squad, but the youngsters’ run to the Youth Cup final has provided the club with a much-needed lift.

“With the history of the competition and our association with it, there are some excited young men and some excited young coaches,” said academy chief Nick Cox. “It certainly is the talk of the training ground right now. There is no way you can keep a lid on the excitement, and why would we want to? It will be a memorable night. The boys have to enjoy it and make sure they savour it.”

“I am delighted that 50,000 fans are going to turn up and hopefully have a nice night and leave feeling proud of their club. But I certainly don’t feel we take on extra responsibility because of what happens at first-team level. Our pressure is not winning games or trophies, it’s about making sure a player reaches their full potential.”

– Which Premier League clubs will qualify for Europe?
– Stream ESPN FC Daily on ESPN+ (U.S. only)
– Don’t have ESPN? Get instant access

United tread a fine line with their youth players. The final has been heavily advertised, and a record crowd is expected (all proceeds will go to the Manchester United Foundation), but the club are also keen to make sure players aren’t thrust into the spotlight too early. Pre-match interviews with the squad have been done in groups of three to ensure no individual gets too much attention, and while there was obvious pride among the coaching staff when Alejandro Garnacho, a 17-year-old forward signed from Atletico Madrid in 2020, was called up to Argentina’s senior squad, United were wary about making too much fuss about his achievement for fear of creating headlines about “the next Lionel Messi.”

When Giggs, Beckham, Neville, Scholes and Butt won the Youth Cup 30 years ago, it was easier to keep players under wraps. Academy games attracted a handful of hardy supporters, and with no social media, it wasn’t until they were regulars in the first team that they became widely known. These days Garnacho, whose senior career so far comprises a single minute in the 1-1 draw with Chelsea last month, has skills videos on YouTube — one titled “The Jewel of Madrid: Who is the Manchester United Wonderkid” — and more than 850k followers on Instagram.

“Alejandro comes on the other night and doesn’t touch the ball, but the reception he gets for two minutes … I don’t think you get that at other clubs,” added Binnion. “It’s the culmination of years and years of work, he has done something that most people will never do in their lifetime and he will go on and get better and better.”

“Literally, a month ago he was part of this group and now he is part of the first-team squad. It’s inspirational because there are boys in the group who feel they are going to be better than him, and you have to have that belief in yourself as a player. Boys in the group will believe ‘if he can do it, I certainly can do it.’ You can’t put a price on that.”

Win or lose against Forest, the main objective is to turn some of these U18s into first-team regulars. Some might even be part of Erik ten Hag’s first preseason tour to Thailand and Australia this summer.

During negotiations to appoint Ten Hag as the next permanent manager, the Dutchman was reminded of United’s desire to see young players promoted into the first team. One of the reasons he got the job was his track record with Ajax, another club with a storied academy. He handed first-team debuts to more than 20 graduates during his time at Ajax and will be expected to continue the trend when he takes over at Old Trafford.

For now, though, most supporters will settle for the youth team providing a small silver lining following a miserable season. Over to you, kids.