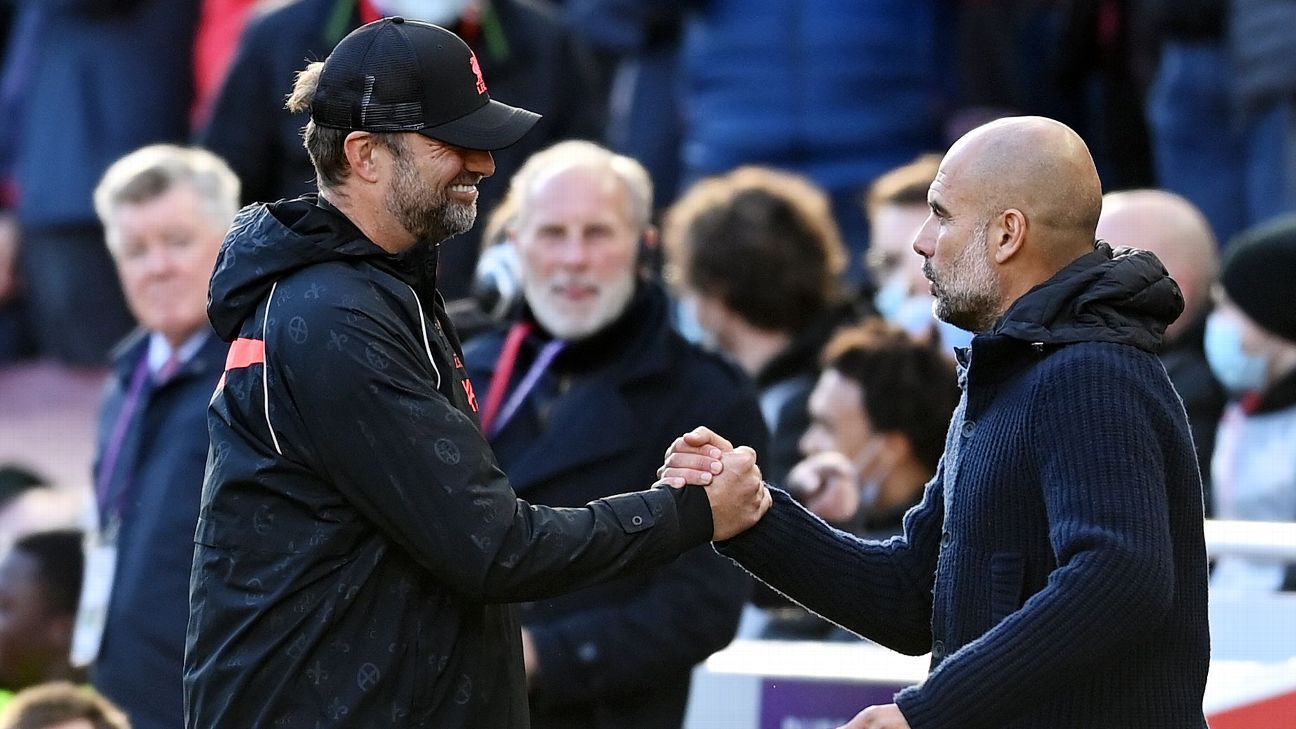 LIVERPOOL, England — There are more back-slaps and hugs between players than flying pizzas and tunnel bust-ups when Liverpool take on Manchester City, but while this fixture lacks the animosity and belligerence of old Manchester United–Arsenal clashes, the sheer quality displayed during Sunday’s 2-2 draw at Anfield showed that the rivalry is as intense as when Sir Alex Ferguson and Arsene Wenger’s greatest teams locked horns two decades ago.

For many, nothing will ever match the sense of occasion and needle that accompanied the majority of those United-Arsenal encounters between 1998 and 2004, when the two clubs won seven Premier League titles between them.

But nostalgia has a habit of making everything seem as though it was better in the past, instantly dismissing whatever the present day can offer as a poor imitation.

And while those games of yesteryear evoke memories of great goals and moments by legendary players such as Thierry Henry, Wayne Rooney, Ruud van Nistelrooy, Patrick Vieira and Roy Keane, Liverpool and City’s recent history has its own back catalogue of unforgettable contributions, which were added to at Anfield when Sadio Mane, Mohamed Salah, Phil Foden and Kevin De Bruyne scored sensational goals.

The effort of Salah, in particular, was up there with the greatest the league has seen. With his back to goal, the Egypt international received the ball just outside the City penalty area, before escaping the attention of several defenders and turning Aymeric Laporte to fire past Ederson from a narrow angle.

“Only the best players in the world score goals like this,” Liverpool manager Jurgen Klopp said. “It was the first touch, the first challenge he wins, then going round and putting it on his right foot, finishing the move as he did. Absolutely exceptional.”

The goal put restored Liverpool’s lead after Foden’s tidy finish had cancelled out Mane’s opener, created by another Salah run. Anfield was alive as home fans sensed another win against the champions, but De Bruyne’s finish from a fast City break earned Pep Guardiola’s side a share of the points. “”I love the Premier League,” the City manager said afterward. “Congratulations Liverpool and their players. That’s why the last years both teams were fighting to win the Premier League.”

The quality on display at both ends of the pitch went beyond the four second-half goals. In the Liverpool goal, for example, Alisson Becker produced the kind of saves that Peter Schmeichel and David Seaman once pulled off for United and Arsenal respectively.

Meanwhile, Rodri’s late block denied what looked certain to a Fabinho winner for Liverpool; it was a fitting moment to cap a personal duel which showed that, while the game’s evolution has taken away physical confrontations that defined the battles of Keane and Vieira, there is still room for tough-tackling and cynical challenges in any modern rivalry.

Yes, Liverpool and City have yet to degenerate into the post-match buffet being thrown among rival players, as happened when United beat Arsenal at Old Trafford in 2004. And, true, Klopp and Guardiola embraced at the end of this game as opposed to offering cursory handshakes a la Ferguson and Wenger, but this game has become the fixture that stops clocks in the Premier League.

It is the first to do so over a sustained period for some time. The Manchester clubs’ rivalry, sparked by Sheikh Mansour’s 2008 takeover at City, has subsided with City’s dominance since Ferguson’s retirement in 2013, but Guardiola’s team has been trading blows with Klopp’s Liverpool for four intense years.

Since the start of the 2017-18 season, the two teams have met 12 times in all competitions and this latest result means each has four wins within that time, with four draws. Moreover, the occasions have always been vital.

There was Liverpool’s epic 4-3 league win at Anfield in January 2018, which was followed by a seismic Champions League quarterfinal triumph for Klopp’s men three months later. City, for their part, have collected 5-0 and 4-0 successes en route to winning three of the last four English titles; Liverpool won the other.

The two sides have been inches apart for many years. In 2018-19, when a John Stones clearance was pivotal in a vital City win when the sides met, Liverpool amassed 97 points and finished second, one point behind Guardiola and Co.

Rivalries are shaped by personalities and storylines, but do not dismiss the intensity of City versus Liverpool because it lacks bad blood. Both teams have players to match up with those from the United-Arsenal era, while Guardiola and Klopp are as important to their clubs as Ferguson and Wenger.

City’s possession game may lack a centre-forward to put the finishing touch to their great build-up play, but they scored stunning goals through Foden and De Bruyne regardless. And Liverpool, while pressed back for much of the game, showed their razor-sharp cutting edge when scoring through Mane and Salah.

When history judges this era, it will be measured in terms of trophies won. City have claimed everything domestically under Guardiola — several times over — while Klopp has made Liverpool champions of England, Europe and the world.

Seven games into this Premier League season, there is little to choose between them again; this pulsating game pointed to both sides again slugging it out for the title next May, as well as everything else.