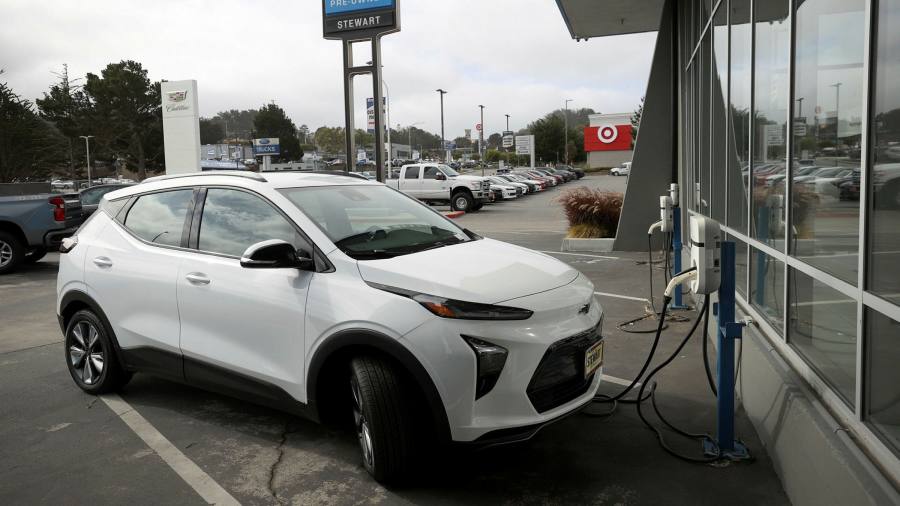 Battery maker LG Chem has agreed to reimburse General Motors for most of the cost of recalling its electric vehicle following a series of incidents between 2017 and 2019 in which the cars caught fire as a result of battery flaws.

In August, the Detroit carmaker issued an expanded recall of the Chevrolet Bolt, following an initial recall in November last year after the US National Highway Traffic Safety Administration opened an investigation into three reported fires.

GM said on Tuesday that the agreement with LG Chem would offset $1.9bn of the $2bn in recall charges it planned to report for the third quarter of this year, adding that it was recalling a total of 140,000 Bolts.

The incident comes as a setback for GM just as it is pushing to expand its electric vehicle offerings. The carmaker has ambitions to spend $35bn by 2025 to introduce 30 electric vehicle models, with plans to double revenue by 2030.

GM said LG Chem supplied it with faulty battery modules, with some of the batteries include two manufacturing flaws in the same cell: a torn anode tab and a folded separator, which increased the risk of fire.

LG Energy Solution, the battery unit that was spun out of LG Chem, said it expected its actual costs from the recall would be about $1.2bn, and would be shouldered along with affiliate LG Electronics.

“Although the investigation has yet to be completed, the fires appear to be due to our battery problems,” LG Energy Solution said, adding that the issues “have been fixed and production has resumed”.

The largest US carmaker is intertwined for the long term with the South Korean group, which also supplies electric market leader Tesla, launching joint ventures to build battery manufacturing plants in Ohio and Tennessee in 2019 and 2021, respectively.

In the first three quarters of this year, GM sold almost 25,000 Bolts, which are priced from just over $37,000 each. This far exceeds the 14,000 sold in the same period last year but falls short of Tesla’s sales.

The carmaker said that it would achieve sales growth by assembling electric vehicles using common parts and a new Ultium battery to produce a broad portfolio of vehicles, including high-volume models such as an electrified Chevrolet Equinox, a crossover that will be priced at $30,000.

GM projects that its electric vehicle revenue will grow from $10bn in 2023 to $90bn over the course of the decade, with profit margins hovering between 12 per cent and 14 per cent.

Wedbush analyst Dan Ives said in a note that investors were sceptical of GM’s growth plans, adding that “the Chevy Bolt fiasco and chip shortage have combined cast a dark shadow over the stock”.

GM’s shares were up 2 per cent on Tuesday morning following news of the LG Chem reimbursement.