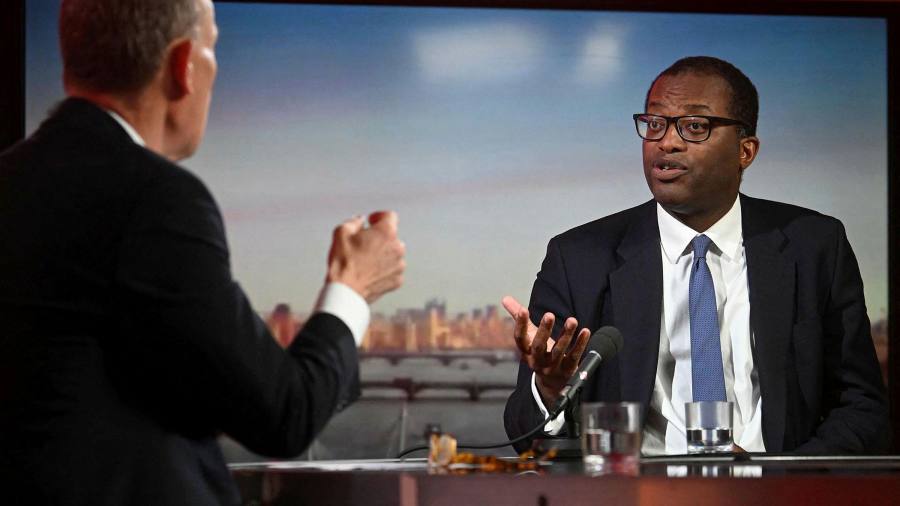 Kwasi Kwarteng has clashed with chancellor Rishi Sunak over a possible financial bailout for British companies struggling to cope with soaring energy costs over the winter.

Speaking on Sunday, the UK business secretary said he was “working very closely” with Sunak after promising representatives of the heaviest industrial energy users at a meeting on Friday that he would explore “practical solutions” to protect them from further shocks in the coming months.

But Treasury officials were quick to dispute the claim that any such talks had taken place with Sunak or his department. In an unusual intervention, one official insisted: “The Treasury have not been involved in talks.”

Some government insiders are concerned the UK is on the brink of an industry crisis. Unless gas prices start to drop, some within government fear companies will struggle to get through the next few weeks without some sort of government assistance.

Executives from heavy industry users have warned ministers that continued high energy prices would force some factories to close and push up the cost of goods.

Tensions are mounting inside government as Sunak seeks to hold a firm line ahead of a tight spending review later this month even as the industry and consumers struggle with higher energy bills and food prices.

Kwarteng, however, denied a report in the Sunday Times that he had asked the Treasury for billions of pounds in support. He told the BBC’s The Andrew Marr Show: “I’ve not asked for billions, we’ve got existing schemes. I’m working very closely with Rishi Sunak, the chancellor, to get us through this situation.”

Gareth Stace, director-general of UK Steel, said the apparent disagreement between the two cabinet members reinforced his view that the sector should appeal to Prime Minister Boris Johnson to “intervene directly to ensure that the energy crisis does not become an industry crisis”.

“I am aghast that the business secretary is saying that he is still looking for solutions,” he said, pointing out that the industry had met Kwarteng at the end of September and presented him with “fully costed solutions”.

Steve Elliott, chief executive of the Chemical Industries Association, who was among those who met Kwarteng on Friday, said that while none of his members was currently having to pause production, he could not rule it out in the next few weeks.

“If all remains unchecked and [gas] prices remain where they are today, I could not guarantee that there wouldn’t be anyone pausing production or shutting down in two or three weeks,” he told the Financial Times.

Ministers have been urged to introduce so-called winter cost containment measures on gas, electricity and carbon prices to ensure factories could continue to operate through the coldest months.

Specifically, industry has demanded a price cap, similar to the one already in place for households, to reduce the impact of the recent price surges. Executives also want the government to reduce network costs for energy-intensive users, similar to measures taken by some other European governments.

Speaking to Sky News, Kwarteng did not rule out a price cap for businesses but cautioned: “I can’t come on your programme and say we are going to have a price cap, because we’ve got to try and work out what the nature of that support might be.”

He added: “What I am very clear about is that we need to get them through this situation, it’s a very difficult situation.”

UK Steel has also suggested the government provide a fixed amount of capacity at a competitive price for an interim period, offering large industrial consumers the chance to buy electricity at competitive prices via a virtual cross-border trade if they invest in new interconnection capacity.

European wholesale gas prices and electricity hit record highs last week due to lower-than-usual stocks, reduced supply from Russia and the prospect of demand increasing during the northern hemisphere winter.