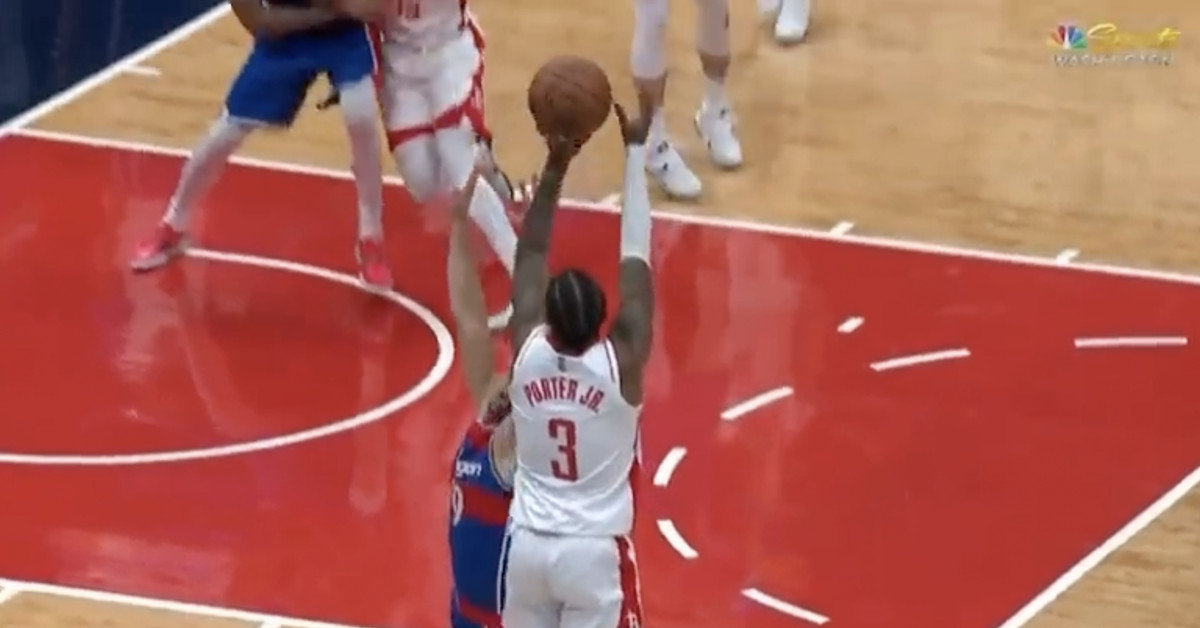 Kevin Porter Jr.’s game-winner against the Washington Wizards on Wednesday night should have been a feel-good moment. Days after being suspended for a game (along with teammate Christian Wood) following a blow-up with an assistant coach, Porter Jr. returned to the lineup and found the ball in his hands in the final seconds with the score tied.

Porter isolated on the left side of the court, went into his step-back, and ripped a game-winning three-pointer at the buzzer. You can watch the Rockets announcers call Porter’s game-winner here.

If any national media is wondering what the Rockets think of KPJ check out this cold-blooded game-winner. Coach Silas has full confidence in KPJ! pic.twitter.com/h4f28enTpq

Porter’s buzzer-beater immediately became the talk of the NBA, but not for the right reasons. When the Wizards broadcast announced the moment, color commentator Glenn Consor made a reference a Porter’s deceased father that was totally uncalled for.

“Kevin Porter Jr., like his dad, pulled that trigger right at the right time.”

“Kevin Porter Jr., like his dad, pulled that trigger right at the right time”

I can’t believe this was actually said on the Wizards broadcast.. Completely inexcusable. pic.twitter.com/bZcWEVqPOP

It’s possible that Consor is confused about who Porter’s father is (update: Consor said he mixed up Porter’s father with a former Wizards player of the same name, and apologized to the Porter family), but the context here makes this a terrible moment that should not be taken lightly.

When he was 19 years old, Kevin Porter Sr. was charged with first-degree murder of a 14-year-old girl. Porter Sr. said the gun accidentally discharged. After a witness recanted her original testimony, Porter Sr. served 4.5 years in jail.

In August 1993, just 15 months after Kevin Porter Jr.’s oldest sister, Keayanna, was born, Kevin Porter Sr. was charged with first-degree murder of a 14-year-old girl. The only witness to the incident initially told police that Porter Sr. was in his car with the girl, pointed a gun at her, told her he was going to shoot her, and then pulled the trigger.

However, the witness, who was the girl’s friend, later recanted her statement that the shooting was intentional. Porter Sr. had said that the young woman had asked to see his semiautomatic weapon, which was loaded and cocked, and it accidentally discharged while he was handing it to her. Porter Sr.’s attorney said the witness had been pressured to say the things she did by the family of the young woman that was killed. Kevin Porter Sr. pleaded guilty to first-degree manslaughter and was sentenced to four and a half years in prison.

When he got out, he had his son, who took his name and proudly kept the “Jr.” attached.

Kevin Porter Jr. would not know his father for long. Porter Sr. was killed in a bar fight when Porter Jr. was four years old. He was reportedly trying to help a friend in the altercation. The Los Angeles Times wrote a heart-wrenching story on the family’s experience while Porter Jr. was playing his college ball at USC.

Porter Jr. has been battling a reputation as a hot-tempered, malcontent dating back to his time at USC. His dispute with Rockets coaches during the recent game against the Philadelphia 76ers again put his story in the spotlight. Raymond Lucas Jr., writing for our Rockets community The Dream Shake, penned a wonderful post on how mental health stigma has plagued the conversation around Porter.

Consor’s call of Porter’s game-winner got so much attention that even LeBron tweeted about it.

Oh he thought this was cool huh!!?? Nah we ain’t going for this! Sorry but this ain’t going to fly! How insensitive can you be to say something like this. Beat it man! I pray for you but there’s no place in our beautiful game for you! https://t.co/UgVOBUOsPK

Here’s the apology and clarification from Consor:

The call was another surreal moment in Porter Jr.’s young but star-crossed life.