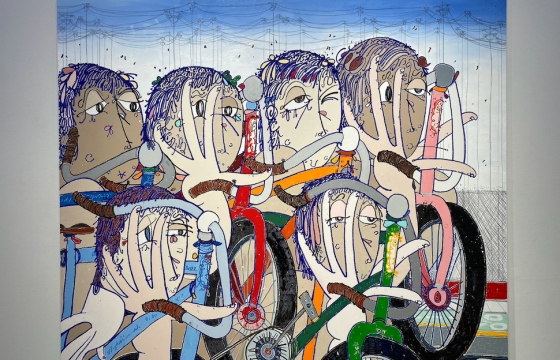 So much has changed in the life and work of Timothy Curtis since our cover story with him in early 2017. There has been shows with Takashi Murakami in Tokyo, works at the Drawing Center in NYC, a solo show at albertz benda, solo booth at Armory and starring works in various group shows. At the time we had our cover, Tim had recently spent seven years in prison, and the work at the time reflected an internal conversation of confinement and evolving persona of his famed “faces.” What is so pertinent now is that Tim’s work feels as internal as ever and yet full of movement. These works are literally about the complications of mobility, what freedoms potentially appear to be and what the reality is. These works are mature, raw, full of energy and show that in just a few shorts years, Tim has found a unique voice in contemporary art.

“I always hoped it would. I was determined it would be,” Tim told us in 2017 in regards to art being his full-time career. The Cat’s Cradle, his solo show that just opened at albertz benda in NYC this week, solidifies a growing vision. of his work. There is his fascination and exploration of the Rorschach test in a stunning installation of black and white works. There are the bicycle works, these twisted, knotted vehicles that symbolize a life in transit, and yet stuck to itself. It’s life and it’s processing one’s self. “Thus, it all comes full circle: Timothy’s life and work is in every single one of his paintings and every single one of his paintings is his life – they are interdependently intertwined,” Thorsten Albertz writes in the show’s intro, and it may be even more universal than that.

Tim’s story unfolds with dichotomies and almost Kafka-esque run-ins. His work continues to expand and simplify. His vision is personal and yet speaks to the human condition at large. Life is a cat’s cradle, and Tim is defining the current era. —Evan Pricco