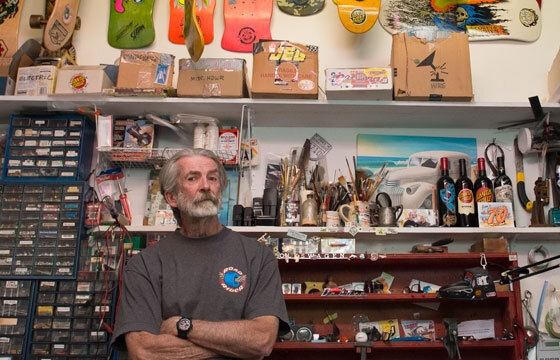 Coinciding with are recent feature in our Fall 2021 quarterly on the Art of the Speed Wheels and the current exhibition, The Art of the Santa Cruz Speed Wheel on view at the Santa Cruz Museum of Art & History through January 2, 2022, we will spend the next few months dipping into the Santa Cruz skate archives and speak with the designers, artists, skaters and team managers who were influenced and shaped by the era and designs. Today, the legendary artist and man behind the graphics, Jim Phillips, tells his story, in his own words.

I was operating a freelance art service out of my home studio in Santa Cruz and started doing projects for a client, NHS, who had at that point we distributors for surfboard building materials, supplying surf shops around town.  All three partners, Novak, Haut and Shuirman had been long time friends of mine through surfing.  In 1975, Rich Novak and Jay Shuirman called me with a job… we started with a t-shirt and sticker that was for Road Rider Wheels. It then progressed to Road Rider ads for Skateboarder Magazine, before moving on to Park Rider Wheel designs and ads.

NHS had a great run in the Road Rider and Park Rider Wheel era, skateboarding went from slalom and downhill to pools and skate parks.  NHS also developed OJ Wheels, which were designed with radius lips that gave them a performance edge.  OJ’s gave me an opportunity to step away from the competition styled advertising of Road Rider and Park Rider and into a realm where I was able to be more creative.  Richard Metiver returned after a hiatus from NHS, and he became the Wheels Product Manager and was determined to make a difference with wheel marketing and innovation. He began to research urethane formulas, playing with durometers and hardness’s, and ways to print artwork on a wheel which, up to that time, was to emboss, or reverse emboss the name in the wheel tooling and mold it into the urethane.

To innovate with wheel printing, we began by studying how graphics were applied to Christmas tree ornaments. This gave us the method and exposed us to equipment needed to print ink on the complex curves of a wheel. The $250,000.00 printing machine NHS bought was customized with a chained series of moving wheel slots that rotated around an oval shaped table. The wheels would be struck by a silicone half-football shaped printing “dauber” as they rotated, passed, and stopped under the print dauber.  The daubers would strike the wheel with an ink print, then the wheel-chain would advance while the daubers lifted up and slid across and pressed down to the ink plate, which was etched with the art. The dauber would pick up the ink, then the dauber returned to the wheel striking position, and another wheel would be printed.  At first it was just one-color black ink and the first wheel printed was an OJ II, very simply labeled across the wheel’s outer edge. The next wheel we printed was also an OJ II, but the logo artwork was now being printed down into the cone of the wheel face. Everyone was waiting to see if the artwork could print on such a steep incline of the wheel face, and it surpassed all our expectations.  Also, wheel size and hardness became more important, and these numbers were also included in the artwork.  At this time, more complex four-color wheel printing was developed with very tight color separations, and the registration and printing accuracy amazed us all.  I remember the first full-on four-color wheel graphic was called Bullet “Church Glass” and it consisted of the wheel name surrounded by what appeared to be broken shards of transparent colored “church window” glass.

The Speed Wheel Santa Cruz 4-color printed wheels turned the industry on its ear and soon dominated wheel sales at an amazing 90% market share, judged by the amount of wheel space in a typical skateboard shop glass display case.  As time went on, the wheel division was being branded as Speed Wheels Santa Cruz with OJ, Bullet, Slimeball and Rockets, and I was asked to create a sticker logo for Speedwheels.  I came up with the now-famous Screaming Hand logo, which had a humble beginning on stickers and tees but grew in use as new printed wheel models were released, and small Screaming Hands made it into the printed wheel artwork.

These are techniques that I developed in my years of free-lance artwork before I came to NHS.  The original wheel art was created on a medium thickness “railroad board” that was translucent enough to see through to my sketches taped underneath the board and positioned on a light table. Then the sketch would be traced and along the way improved with a blue “non-repro” pencil that drafting artists require.  After the image was transferred the “blue line” design would be inked in black, with hand dipped ink in a bottle of Pelican India ink, and white Pen-Opake ink, which has since been banned because of its high lead content. Lead in the medium is what made old world painters like Goya go nuts and maybe I did too.  Wet ink has other more immediate dangers of spilling or smearing but it was before the high-quality black denseness of India ink was available in pens.  The pens were mostly Speedball in the B-5 range, with small sized brushes from 00 to 3 to “spot the blacks”.  Creating complicated art and color for the wheels was exacting.  The graphics had to be tiny, but I needed to get in there “up to my elbows.”  I initially created my art at 150% oversize so that any anomalies would be lost in the reduction.  I knew the original art had to be larger and I generously laid it out for myself at 400%. But I still could not get the detail I wanted when it was reduced to 25%, so I went to 800% which became the standard, and it is mostly what you see here at this exhibit in frames.

To make the color separations, since it was the “Old World” before computers, I used what was known in the advertising field as Rubylith, an acetate film with a red plastic coating that would peel off where a photo, or in this case a color, would be located by cutting with X-Acto knives and peeling off the excess. The red is seen by the copy camera as black, but its translucence allows the artist to see through it and cut accurately along the key lines. You will see examples of Rubylith here at the exhibit, still taped to the art board as it was during production.  After a few years, my workload was expanding so I started Phillips Studios and took on a dozen or so young skateboarder studio artists.  They were the best young skateboarding artists you could ask for, eager to do whatever I wanted and quick to learn. The wheel art was something I could trust some of the more inexperienced workers with as it was all made at 800%. Coloring the wheels was time consuming for me and I wanted to focus on decks and the half dozen ads we were doing per month on a regular basis.  One of my hires, Andreas Ginghofer was a surfing buddy of Jimbo’s (my son) who lived just around the corner, and he was hanging out in the studio so much I gave him a try-out. It turned out he wasn’t so good at drawing and didn’t like it much. So, I gave him a wheel graphic to cut the color Ruby layers.  I would make a copy of the key art and color it with pens and colored pencils as a coloring guide. Andre began cutting Rubylith following the guide and took to it like a fish to water.  He even went out and got glasses to see all the detail, and he did it as good as I could do it!  So, I put him on full-time color separating wheels and anything else we were doing, and that was the key to my finally catching up with the load of work orders I had running and the stress I was enduring by opening a studio.

Speaking of stress, beside mental issues there are some physical demands made on the artist that are not usually known.  Number one, after sores on your butt, is the durability of my drawing and inking fingers. The pencils and pens are tightly gripped for control and accuracy and are held by less than an inch of flesh on the tips of my thumb and middle finger leaving in both a permanent divot, and in the latter, with a cartilage bump above that nature provided with which to push the pen against, but not without recurring pain levels after hours of work.   At one time my finger went numb. I went to the doctor, and he didn’t know why.  So, to keep up with my workload I devised a wire that I wrapped around my finger with a hook to rest the pen in.  That got me through the many days and nights I worked in those times.  —Jim Phillips

The Art of the Santa Cruz Speed Wheel will be on view at the Santa Cruz Museum of Art & History through January 2, 2022. Throughout the fall, go to Juxtapoz.com for exclusive stories from the skaters, artists and brand managers on the history of Speed Wheels.