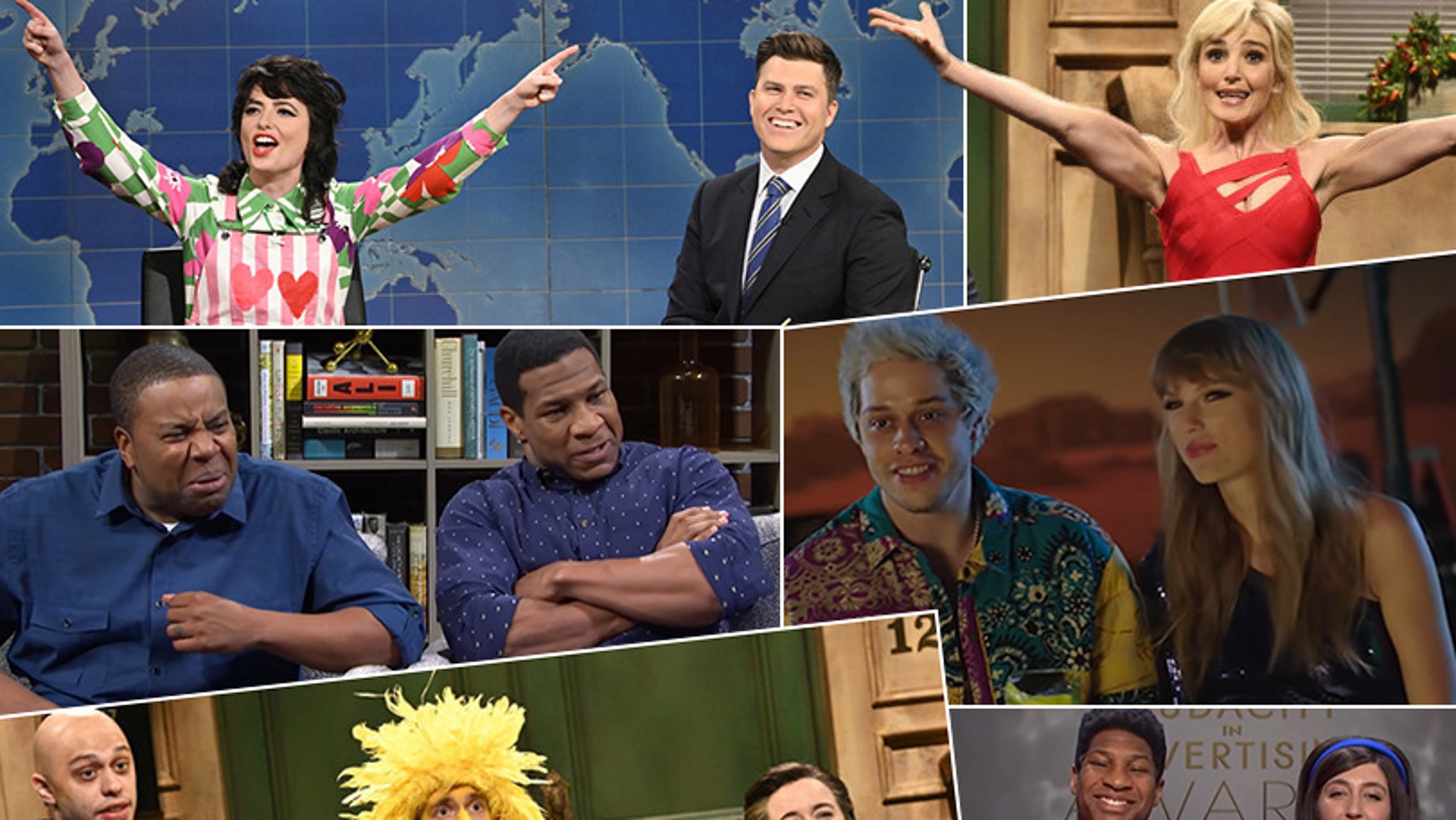 Taylor Swift performs the 10-minute version of “All Too Well,” but still finds time to join Pete Davidson in savaging the trio behind the Please Don’t Destroy video shorts in a hilarious music parody.

While we’re not quite ready to call Jonathan Majors’ hosting debut on “Saturday Night Live” the first real misfire of the season, it was definitely our most inconsistent episode yet.

Starting off with a rough monologue, Jonathan quickly settled down and brought some great work to later sketches throughout the night. The sketches, though, were definitely hit-or-miss. Some had good concepts that just weren’t executed fully in the writing, while some just fell flat altogether.

One bright spot this season has been the explosive growth of the Please Don’t Destroy trio of writers and comedians. This week, they got Pete Davidson and Taylor Swift in on the fun for their best sketch yet. While none of them are part of the cast — we don’t know if that’s something they want — we’re so glad they’re getting the chance to do these pieces.

Speaking of Taylor Swift, she opted to do one performance instead of two because that performance was the 10-minute version of “All Too Well” that she released this week as part of her second re-recorded album, “Red.” Behind her was footage from the short film music video she created starring Sadie Sink and Dylan O’Brien.

It was an ambitious performance with some real emotional content, and from what we could tell, the short film itself is incredibly emotional, with great performances from both leads, and Sadie in particular. You can check out the film here, and Taylor’s live performance below:

As usual, we’re ranking all the sketches from worst to first, including the Monologue, Cold Open, “Weekend Update” and any sketches that were cut for time but made their way online. We’ll skip the musical guests, because they’re not usually funny — unless Ashlee Simpson shows up. We wrap up with a look at the cast-member who had the strongest week.

Jonathan Majors definitely faltered under the live show, and clearly was out of his comfort zone. He had a sweetness about him, but his stories fell flat and his jokes were worse. It wasn’t even that his delivery was bad, the jokes themselves were poorly written and hackneyed. Overall, it was clear this wasn’t his forte, but as we already know he’s a great actor, we were hopeful this wasn’t indicative of how he’d be the rest of the night.

The Audacity in Advertising Awards

Hosted by Jake from State Farm (Jonathan Majors) and Flo from Progressive (Heidi Gardner), this had a great premise, but it never really came together as strongly as it could. Unfortunately, the Facebook Portal fake ad that kicked it all off was probably the strongest. Considering the legacy of “SNL” in making great fake ads, we were really hoping for a better takedown of the advertising industry, but this was pretty softball stuff overall. A bit disappointing.

Jonathan Majors was really having a blast in this one, while Cecily Strong and Bowen Yang continue to prove whey they are musical theater wrapped up in comedy (Bowen for a spot in “Schmigadoon!” Season 2!). The fact that their whole joyful performance was about drugs was perfectly balanced by Aidy Bryant and Kyle Mooney in the audience with their young daughter, and a little horrified at the content. We didn’t love the ending, but the performance itself was just on the right side of stupid.

Britney Spears Reacts to End of Her Conservatorship: “I Think I’m Gonna Cry the Rest of the Day”

The March of the Suitors

A pretty thin premise, but made fun by the characters the cast got to bring in front of Chloe Fineman’s queen. Kyle was the guy friend who’s secretly in love with her — ‘cause that always works well — and Andrew was a well hung peasant, but the real fun came when Jonathan Majors showed up as a foreign prince, only with a surprise twist that only Ego Nwodim could nail perfectly. Then, throw in Punkie Johnson shooting her shot and the whole thing had a certain charm to it. Overall, it wasn’t hilarious, but it was entertaining.

We did not have a parody ad featuring Bone Thugs-N-Harmony on our Bingo card for 2021, but what a great parody twist on their mainstream hit “Crossroads.” The harmonies were actually pretty sweet between Jonathan Majors, Kenan Thompson, Chris Redd and Ego Nwodim as the Bones guys, and the idea of a dog bone store makes sense. But mostly we were impressed how they incorporated all of the different portions of the song into this silly story. Definitely lands better for those familiar with the original track.

“It’s a gated community where kids are safe from the woke government,” declares Aidy Bryant in this terrifying parody of Cruz’ outrage over Big Bird getting the Covid vaccine. We say terrifying, because this Big Bird is the stuff of nightmares and we may never sleep again. Cecily then came out as Marjorie Taylor Green, called a kid a “p—-” for not wanting to hold a gun and then announced this week’s sponsor, Q (“not the letter, the man”).

From here, we devolved into nonsensical conspiracy theories, the aftermath of Big Bird’s vaccine shot, some medical guidance from Pete Davidson’s Joe Rogan, It got a little packed toward the end, rushing through “Proud Boys” Bert & Ernie, Democrat Oscar the Slouch and a random quick hit from Chloe Fineman’s Britney Spears (a real mismatch), but the overall premise was a lot of fun and Aidy’s Ted is always perfectly unhinged.

An unexpected announcement to the congregation from the reverend (Jonathan Majors) and his wife (Ego Nwodim) on how they’ve decided to keep their marriage alive after a tough past year. Let’s just say their solution is not one that would go over well in most Christian circles — and yet their congregation is strangely into it. There were a lot of fun exchanges between the pair and their parishioners, but the highlight had to be Kenan Thompson as the organist just trying to get in there. Give him a chance, guys!

Coming just after Taylor Swift’s 10-minute performance of “All Too Well,” Colin Jost had some advice for anyone dating her. He and Michael Che then went in on Steve Bannon and even the media, when talking about Britney Spears being freed from her conservatorship.

Colin then welmed newcomer Sarah Sherman to come out and give us an update on how the new season of “SNL” has been going so far. It turned into an epic roast of Colin Jost that got funnier as it went along. Her delivery was a bit grating and over-the-top at first, but by the end, Sarah had accomplished the important task of sharing her personality with the viewers at home. This was her biggest moment so far on the show, and (at Colin’s expense) she slayed it!

Not all jokes land, but Colin scored big with his take on the flavor of the new Bud Light Seltzer Eggnog. The boys even admitted that their jokes were a little dark this week, with one death joke after the other. Maybe we’re morbid, though, ‘cause it was working for us!

Aristotle Athari got a showcase of his own to feature a great vocal delivery as a stand-up comedian robot. The material wasn’t all great, which seemed intentional, but we did enjoy his story about dating a GPS system. Mostly, though, it was his overall delivery (save one near break) that really sold the bit. We’re getting the sense he’s a bit of an oddball in the Kyle Mooney sense, which could be fun when he gets his chance to cut loose.

Tara Reid Claims Nobody Hooked Up on Set of American Pie

Kenan Thompson and Jonathan Majors carried this fun sketch on their backs. It’s always a risk to work with kids, but this trio of tykes was perfect in bringing just enough creepy to help Kenan and Jonathan take each appearance to the next level. The stories themselves were the typical creepy kid fare, but it was in how Kenan and Jonathan reacted that the sketch found its funny, and there was plenty to go around. Add a killer surprise ending, and this sketch was everything we wanted it to be.

Martin Herlihy, John Higgins, and Ben Marshall are quickly making a strong name for themselves with these fun short videos, as evidenced by the audience applause for their bumper graphic. This time, they even landed musical guest Taylor Swift to join them. Well, maybe it wasn’t them. For the first time, the trio headed out of their shared office space to join Pete Davidson in a music video that does … not … go well. The title kind of says it all, but it’s the journey that really brings the laughs. By the time Taylor joins, we were ready for anything, but she took it to the next level. Easily the most ambitious, and now the best PDD short yet.

A pretty good statement piece, and funny bit, about how men struggle to form close intimate relationships outside of their romantic ones because of our narrow views of what masculinity is. It just doesn’t allow for emotional connections. So why not take them to a “man” equivalent of a dog park? The guys in the cast were hilarious gingerly trying to connect over things like Marvel and sports, with no real ability to have real conversations of substance. Is this sad or funny? Either way, it’s pretty brilliant. And Heidi Gardner’s closing comment (that she instantly regretted) was the perfect cherry on top.

Kendra Wilkinson Opens Up About Coparenting with Ex-Husband Hank Baskett, Life As a Single Mom

PLAYER OF THE WEEK

This week featured a lot of big cast pieces, with a lot of performers in each bit. It cut down on star breakout moments, which could be why Sarah and Aristotle getting those big opportunities on “Update” really stood out for us. Plus, it’s always great to see the new cast members getting a shot to make their mark.

There were some great moments outside of “Update” for cast members, including Cecily’s always delightful Marjorie Taylor Green, Aidy’s Ted Cruz, Ego’s over-it wife in the suitor piece and the pastor sketch, and Kyle’s twisted turns as Big Bird and all of his bit roles throughout the night (he was everywhere).

Another face we saw a lot of is Andrew Dismukes, who’s really coming into his own this season as more than just the guy who looks 12 years old so he can play kids. He’s still great in those roles, but his own subversive comedy and personality is starting to come through as well.

For sheer overall quality, though, we actually have to lean on the most veteran of vets this week. He wasn’t in as many sketches as some others, but he elevated all the ones he did appear in, cracking us up as an organist who just wants in on the fun, and even more as a talk show host who does not want to have to deal with those creepy kids.

Throw in a great best friend sidekick in the suitors piece and an immersive performance as one of the Bone Thugs-N-Harmony gang (Ego and Chris were great here, too), and Kenan proved that it’s what you do with every opportunity, no matter how big, that matters on this show.