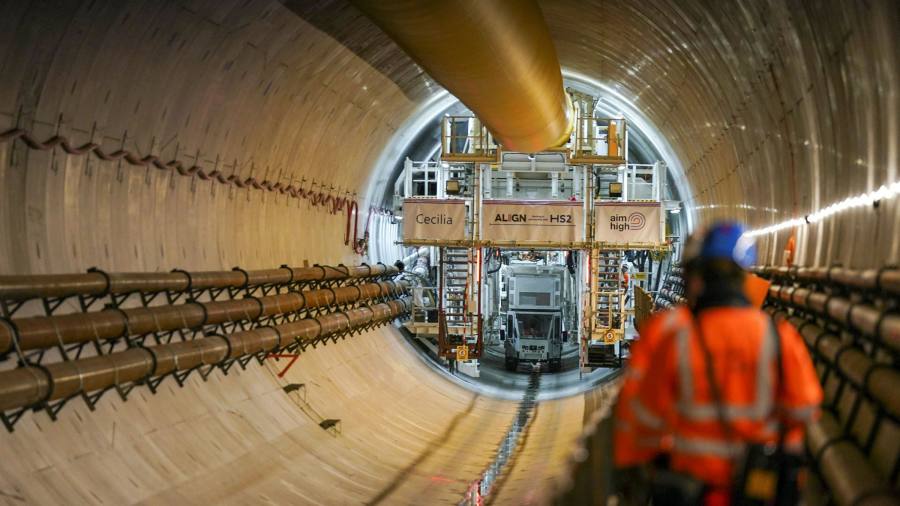 Boris Johnson will on Thursday unveil £96bn of investment in rail links to boost northern England but the watered down plans risk inciting the wrath of MPs in the region.

When he announces a new Integrated Rail Plan, the prime minister will confirm cuts to the north-south High Speed 2 and the High Speed 3 line from Leeds to Manchester.

Jake Berry, chair of the Northern Research Group of Conservative MPs, reminded Johnson during prime minister’s questions on Wednesday that he had committed to building an entirely new line between Manchester and Leeds.

The Northern Research Group has warned Johnson not to water down his infrastructure promises.

Johnson, who told Berry to wait for the announcement, will insist it amounts to the “biggest ever public investment in Britain’s rail network”.

“The Integrated Rail Plan . . . will deliver meaningful transport connections for more passengers across the country, more quickly . . . it will ensure no town or city is left behind,” he will say, according to a government statement.

The government is going ahead with building the western leg of High Speed 2 from London to Manchester via Birmingham.

However, an eastern leg from Birmingham to Leeds is now being slashed so that it stops abruptly at a new station in Nottinghamshire called East Midlands Parkway.

Meanwhile, the Leeds to Manchester high-speed line will also be pared back to save money. The new line will only go from Manchester to Marsden, near Huddersfield, with an upgrade of the existing track from there to Leeds.

Philip Davies, Tory MP for Shipley, said northern England looked set to be “short-changed” as a result of the tweaks. “Anything less than the new link (from Leeds to Manchester) would be a massive disappointment and a huge missed opportunity,” he told Sky News.

Mike Cherry, chair of the Federation of Small Businesses, said: “Confirmation that a significant section of HS2 is not going ahead will come as a big disappointment to small firms right across the country which were banking on its delivery. Targeted, local investment is a great thing — the detail unveiled tomorrow will reveal whether we have enough here to make up for the HS2 shortfall. There will be those who worry that the levelling-up agenda is already going off track.”

The rail plan will also emphasise how Leeds will benefit from a new tram system and the electrification of the Midland Mainline, which runs from London to Leeds and Sheffield.

Meanwhile, Sadiq Khan, the mayor of London, has warned that bus and Tube services in the capital will be slashed if the government continues to “starve” Transport for London of funding in the coming months.

TfL has been given four financial rescue deals by the government since the start of the pandemic as it struggles to deal with a collapse in passenger numbers.

The TfL finance committee released papers on Wednesday evening suggesting that the transport authority is heading for a financial shortfall of £1.9bn in 2023/24, much deeper than projected.

The Labour mayor has warned that unless the government provides new rescue funding within a month there will have to be a “managed decline” involving an 18 per cent cut in bus services and 9 per cent reduction to Underground services.

He said the “devastating” plans would also mean the closure of roads and some tunnels such as Westway and Rotherhithe if TfL is unable to pay for their upkeep.

At the same time there would need to be a halt to all new step-free access schemes, an end to the Piccadilly Line signal upgrade and the cancellation of all planned additional cycleways.

But one government figure said Khan had exacerbated TfL’s financial problems by his recent decisions to reopen the Night Tube and reduce the hours of the congestion charge.