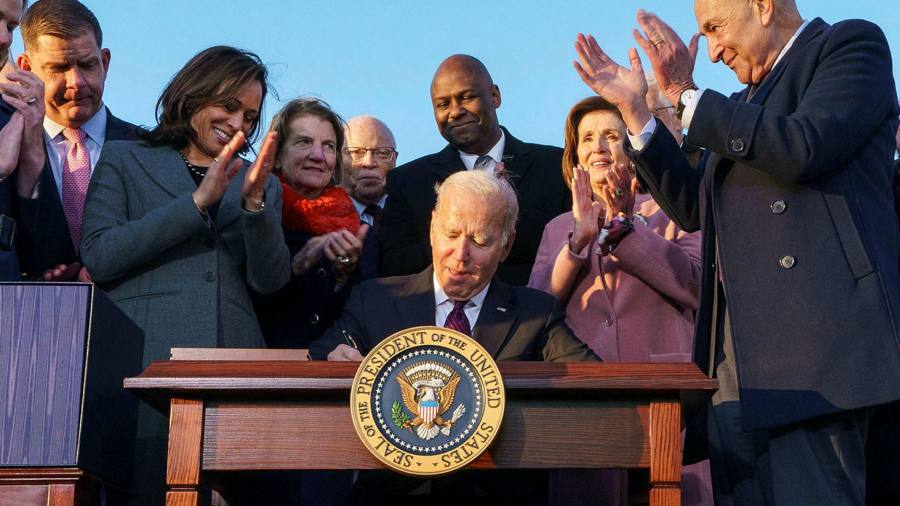 The writer is former CEO of Loral Space & Communications, and currently CEO of BLS Investments. David Rothkopf, CEO of TRG Media, also contributed to this article

For almost half a century, no American president was able to muster the political will to invest significantly in US infrastructure. The roads, highways, ports, water and power systems of the world’s richest nation have suffered continued neglect. Our competitiveness was diminished. But with Joe Biden’s Infrastructure Investment and Jobs Act (IIJA) signed into law in November, the US is now committed to making a historic $1.2tn commitment to economic growth. This dwarfs even the sums spent by Franklin D Roosevelt at the height of the New Deal.

Getting the bill passed was a struggle, but the consequences in terms of job creation and economic growth will be enormous. However, if the US is to remain the world’s leading economy in the century ahead, American federal and state leaders must go further. This should be a transformational moment in which the US proves it is rising to the challenges of a global economy marked by the ascent of China, the advent of new technologies and the urgency of climate challenges. That requires more than one piece of legislation.

The American Society of Civil Engineers (ASCE) has for years warned of the consequences of failing to invest in our infrastructure, most recently giving the US a “C-minus” grade due to its decline. According to the World Economic Forum, America had fallen to 13th in the world for the quality of its infrastructure. Presidents from both parties, including Barack Obama and Donald Trump, emphasised the importance of doing something — but fell short of action on any meaningful scale.

Biden, however, leveraged the support of key Republicans, including Senate minority leader Mitch McConnell, to prevail in a polarised system. The White House projects that the deal will “rebuild America’s roads, bridges and rails, expand access to clean drinking water, ensure every American has access to high-speed internet, tackle the climate crisis, advance environmental justice, and invest in communities that have too often been left behind”. Administration estimates suggest that if the US Senate also passes the $1.75tn Build Back Better initiative — which is facing unanimous opposition from Republicans — this would create 1.5m jobs a year for a decade.

The ASCE has framed IIJA as “a significant down payment” on America’s physical infrastructure. This makes a crucial point: the need to continue investing afterwards. China spends a tenfold percentage of its gross domestic product on core transport infrastructure. What is more, as an emerging economic power it is also building much of its infrastructure from scratch to 21st-century standards, while the US must spend a significant portion of its investment on repairs to legacy systems.

According to the ASCE estimates, even after this bill is passed, the US needs to spend another $1.4tn to close its “investment gap” up to 2029. The country cannot afford to go decades between major investments in infrastructure. But taking full advantage of the new IIJA resources will already pose formidable challenges. The Brookings Institution suggests an effort this large will require “internal planning, internal and public review, and hiring staff and building knowledge resources” by the federal government. State and local governments will also require similar resources if funds are to be spent wisely.

Given the US federal system, an effort must be made to co-ordinate the investment drive. Biden’s appointment of former New Orleans mayor Mitch Landrieu to oversee implementation of the bill is an excellent first step. However, the federal government should go further and invest in creating a national infrastructure planning process that both identifies strategic needs and measures progress towards achieving them.

Finally, in order to maintain support for future investments, the administration must emphasise and effectively communicate the public benefits of the IIJA. The results will be so varied and widespread that the overall impact may be hard for the public to see. As The New York Times has argued, the infrastructure bill’s ultimate popularity “will depend on whether people can cite specific examples of how it has affected their lives”. That requires visible national and regional signature projects and clear branding about what has been done.

This bill is a breakthrough. But its impact will be dramatically increased if it signals a new era of American investment in ourselves, an era in which the government provides the resources necessary to help workers, entrepreneurs and companies thrive in the decades ahead.