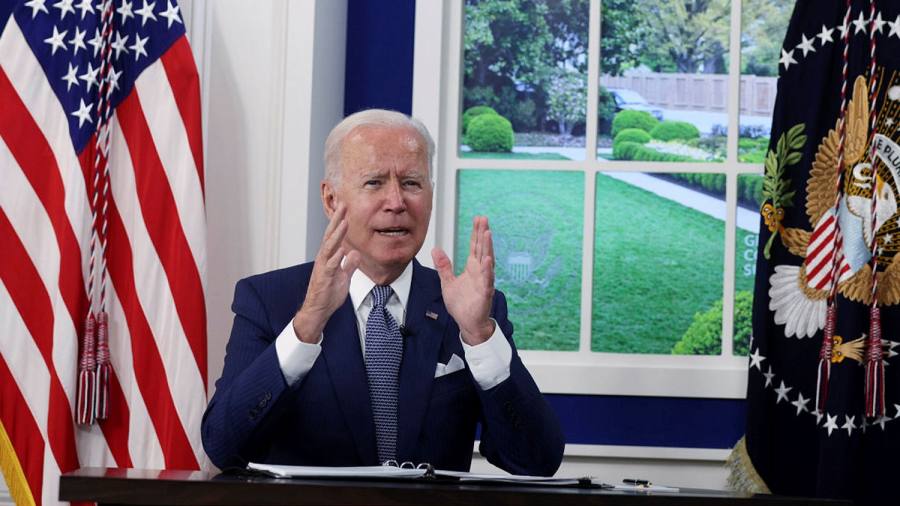 Everyone talks about the weather, goes the quip, but nobody does anything about it. Joe Biden billed himself as the long-awaited departure from the Democratic tendency to talk the talk on global warming yet fail to walk the walk. Biden would finally take serious action. In practice he is sending radically mixed signals. On Tuesday Jen Psaki, the White House spokesperson, said Biden was “looking at every means we have to lower gas [petrol] prices”, including pressing Opec to step up its oil production. Two weeks earlier, America’s president had described global warming as “code red — the nation and the world are in peril”. These statements cancel each other out.

Which of them Biden really means is the $64tn question. The answer — that he agrees with both — is exasperatingly ambivalent. Biden’s oil price anxiety is simple. At over $80 a barrel, oil is at a multiyear high. It feeds into high pump prices, which contribute to rising US inflation, which wipes out much of the wage growth America’s middle class should be enjoying. That, in turn, could jeopardise Democrats’ chances of holding on to Congress in next year’s midterm elections, which would sink all of Biden’s agenda, including his plans to fight global warming.

This trade off puts Biden in particular — and US politics in general — in a recurring dilemma. The drug addict who begs a little more supply to tide him over to rehabilitation rarely makes it to the clinic. There is no doubt that Biden wants to do the right thing. But he keeps encountering reasons to postpone the reckoning. The best example is his rejection of a carbon tax. Biden pledged in the election campaign not to raise taxes on Americans earning less than $400,000 a year. If that promise were confined to income, it would cover more than 99 per cent of Americans — a broad exclusion given the cost of Biden’s ambitions.

But he has interpreted it far more sweepingly — to include any kind of tax, which would rule out Americans paying higher excise fees to fill up their petrol tanks. Forswearing a higher carbon price robs Biden of obvious revenues to fund the big investments in his two “build back better” bills. He is also renouncing by far the most effective tool for cutting emissions — the market price incentive. Republicans hate the carbon tax because they reject all taxes and because they do not take global warming seriously. The left distrusts a carbon tax because it relies on the market to do the job. Also because they fear it would cause a backlash.

As a result, Biden’s legislation is packed with the kind of micro-regulation that would have made the Soviet Union’s Gosplan proud. The details — tax breaks for clean energy, spending on a network of electric vehicle charging stations, clean energy targets for utility companies — matter less than the method. It is as though the drug addict insisted on trying homeopathy before submitting to other means.

Biden is betting on regulations over incentives. US political history tells us that this is not even second best. But even if these measures passed, which is very much in question, they would not get the US close to fulfilling the President’s goal of cutting emissions in half (from 2005 levels) by the end of this decade. “At best it would get America about a third of the way there,” a senior climate negotiator told me.

Where would the rest come from? The answer entails two heroic assumptions. The first is to hope America will finally reach a point where a majority concedes to a price on carbon. The nearest moment would be after a Biden re-election in 2024. But it is a punt. America is the only big democracy where one of the two large parties refuses to admit to man-made global warming. If it was Biden versus Donald Trump, the 2024 Democratic nominee would have a hard time fighting an opponent who brands a carbon tax as socialism. Never mind that it is the free market solution.

The second is that technology will fill in the blanks. The magic phrase “net zero emissions” is based on the implicit bet that humanity will find a technological breakthrough soon. The best way to incentivise that outcome would be to make carbon more expensive. It goes without saying that urging Saudi Arabia to pump up the volume is a step in the wrong direction.