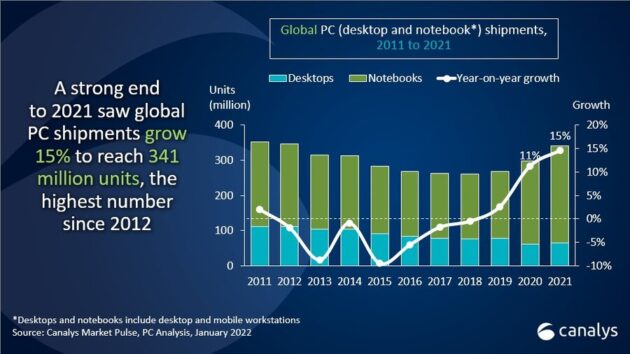 Microsoft’s original mission was “a computer on every desk and in every home.” OK, sure, it was a “temporal goal,” not an enduring mission, as current Microsoft CEO Satya Nadella has since pointed out. And in reality, they added another phrase when referencing the mission internally: “running Microsoft software.”

Anyway, the point is, maybe it wasn’t ambitious enough. It’s turning out to be two computers, or more, and in some cases multiple PCs per person.

That’s the big takeaway from the year-end stats for the global PC market, released by research firms Gartner, Canalys and IDC on Wednesday. Despite the impact of supply chain bottlenecks in the fourth quarter, the numbers show PC shipments reaching their highest points in nearly a decade for the full year — growing by 10-15% to a total of 340-349 million units, depending on whose estimates you use.

“PCs are now in the hands of both young students and older family members, while ownership of two or more PCs per person has become more common in developed markets,” said Ishan Dutt, Canalys senior analyst, in a press release. “Since the onset of the pandemic, a larger than normal proportion of PCs shipped have been new additions to the installed base rather than replacement devices, especially in areas such as education and remote work.”

Dutt added, “This has set the stage for continued success for the PC industry as there is no turning back from how embedded they are in our day-to-day lives.”

As for that “running Microsoft software part,” traditional Windows PC vendors still dominate the rankings, although in many cases the numbers do include Chromebooks from many of those same computer makers. At the same time, Apple saw big gains in Mac shipments, with estimates putting its growth between 18% and 22% for the year.

Microsoft reports its earnings for the December quarter (its fiscal second quarter) on Jan. 25, although the aforementioned fourth-quarter slump (as shown in the Gartner chart above) means that the impact on its year-over-year quarterly growth could be muted.

But beyond that, the emerging consensus is that pandemic has created a lasting change in consumer behavior and the PC market. As Canalys analyst Dutt concluded, “This has set the stage for continued success for the PC industry as there is no turning back from how embedded they are in our day-to-day lives.”