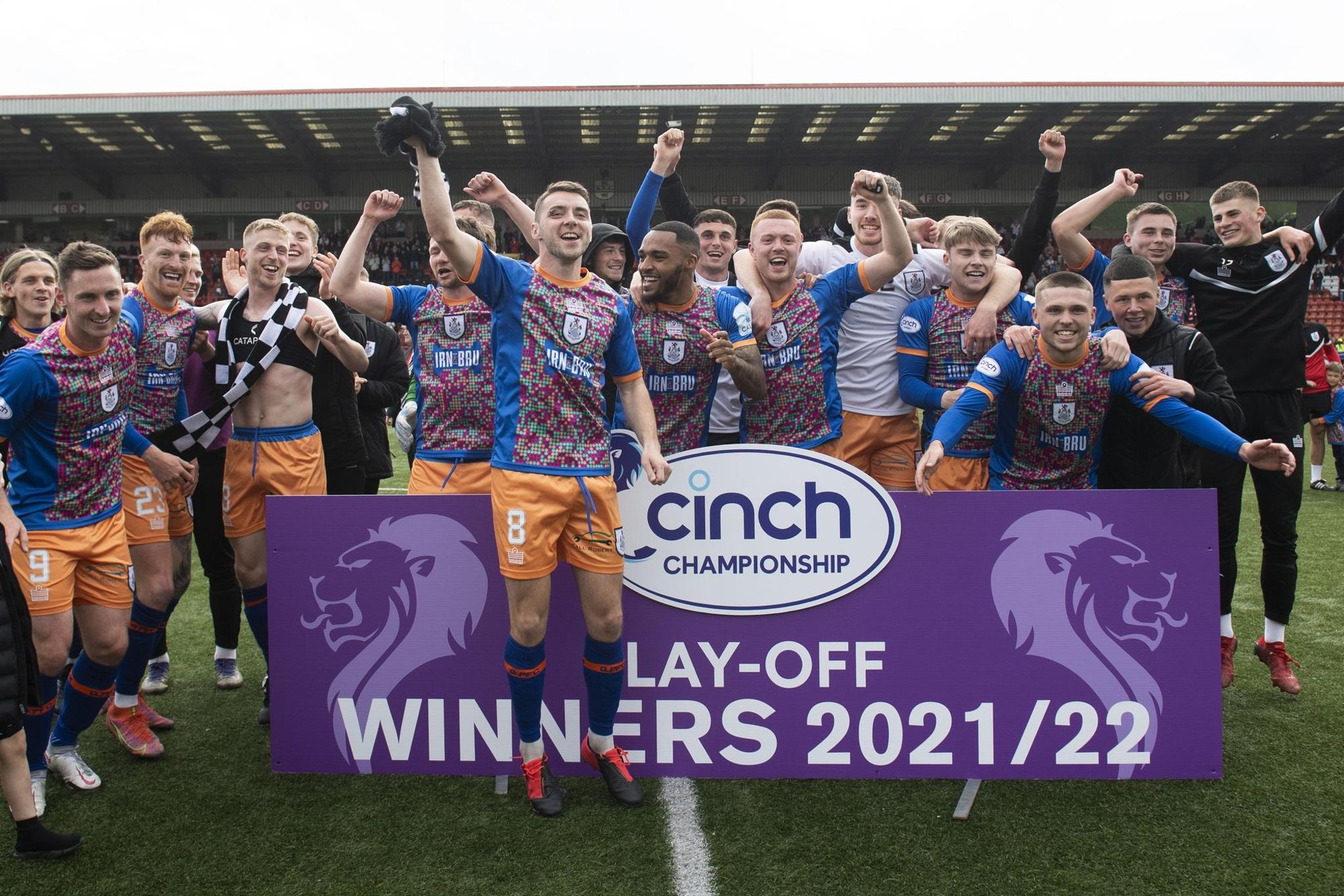 Queen’s Park players celebrate promotion to the Championship after the play-off win over Airdrie. (Photo by Craig Foy / SNS Group)

The sides headed into the game level at 1-1 after the play-off final first leg, but it the Spiders who prevailed to earn back-to-back promotions since abandoning their amateur status and turning full-time two years ago.

Airdrie drew first blood when Rhys McCabe curled in a superb free-kick from 25 yards to send the home fans into raptures. Queen’s were not behind for long as Connor Smith capitalised on some loose possession before firing home the equaliser.

Both sides pushed for a winner in normal time but neither could find one and the game went into an extra 30 minutes.

The all-important winner came with eight minutes to go when Murray was barged down in the penalty area by Dylan Easton. The former Hibs striker stepped up and smashed the ball past goalkeeper Max Currie to seal promotion and condemn Airdrie to another season in League One.

Incoming manager Owen Coyle was in the Queen’s dug-out ahead of officially taking over next month but it was interim boss John Potter, appointed in January following the sacking of Laurie Ellis, who reflected on the club’s historic achievement.

“It’s amazing,” Potter said. “It’s a big team effort from the staff and players. There’s been a lot of changes at the club this year and they’ve had to hang it at times, but we’ve managed to do that and produce a performance when it really mattered.

“I thought we were the better team today. We deserved to win and we’re delighted to get promoted.”

On whether he will remain at Queen’s, Potter added: “We’ll see. We’ll sit and get a chat. I’ve loved my time here. There’s good players and good people at the club, and obviously the manager’s there as well. We’ll see what happens over the next wee while.”

Queen’s captain Michael Doyle admitted he was “overwhelmed” after the final whistle, adding: “We finished fourth so we had to fight the hardest to get here. [Airdrie] finished 21 points ahead of us so that just shows you how good they’ve been the full season. But going into this I said to the boys if you can go into it with momentum, that’s all it takes.”