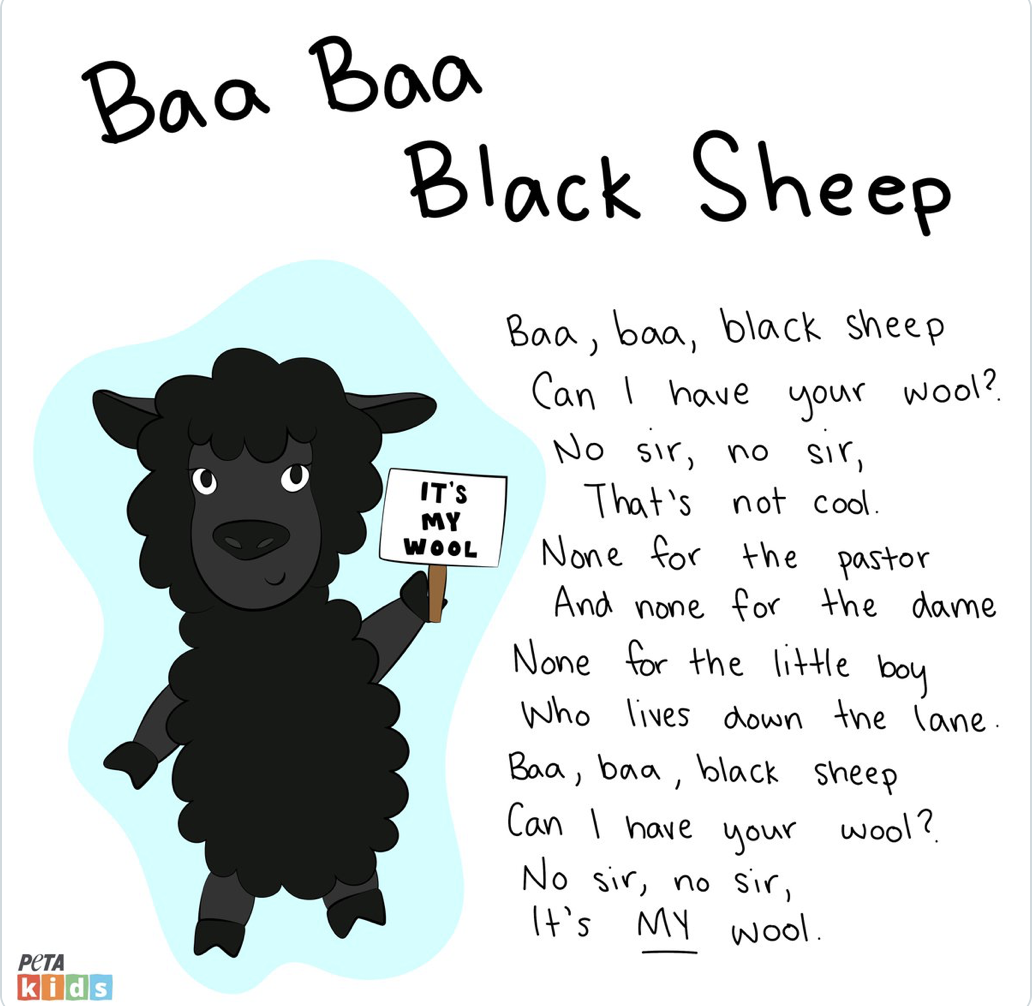 UPDATED versions of classic nursery rhymes such as Baa Baa Black Sheep and Little Miss Muffet have been released to “remove insensitive language”, be more “animal friendly” and discourage “speciesism”.

In a move branded “woke” by critics, a raft of classic nursery rhymes – dating back hundreds of years – have been rewritten, with Baa Baa Black Sheep changed from the traditional ‘Baa baa black sheep, have you any wool?’ to ‘Baa Baa black sheep, can I have your wool? No sir, no sir, that’s not cool…it’s my wool.”

What about Little Miss Muffet?

The line in the traditional Little Miss Muffet, telling the tale of a little girl being ‘frightened away’ by a spider has been updated to it “brightened Miss Muffet’s day!’ Little Miss Muffet has also become vegan as instead of eating “curds and whey”, she is now “watching the bluebirds play”. And in This Little Piggy, there is no more roast beef, with the rhyme now saying “This little piggy had roast beets”.

So what’s behind it all?

PETA state: “Attitudes toward animals have changed a lot in the hundreds of years since many nursery rhymes were written. And in the same way we’ve given old songs and fairy tales much-needed makeovers to replace racist, sexist, and otherwise insensitive language, we should make sure nursery rhymes are relevant for kids today and don’t encourage speciesism, cruelty to animals, or fear of them. Animals are intelligent individuals capable of joy and suffering. They’re not ours to exploit, and our language must evolve to reflect this.”

What has the reaction been?

Many branded the new nursery rhymes “woke” saying “our country has gone potty”. On Facebook, Hazel Tanner wrote: “What utter twaddle and these idiots are teaching our children. Brainwashing them actually.” Another, Jan Ward, wrote: “It was good enough for me and my children, so I won’t bow down to this woke rubbish., Enough!” Sally Morris added: “Please can someone explain to me that if you left a sheep unshorn then it’s less cruel?” But PETA say: “Words matter. Let’s teach kids compassion with these fun, animal-friendly nursery rhymes.”

A new study by King’s College London found culture wars is splitting the nation, with 36 per cent of the public regarding “woke” as an insult and 26% taking it as a compliment.