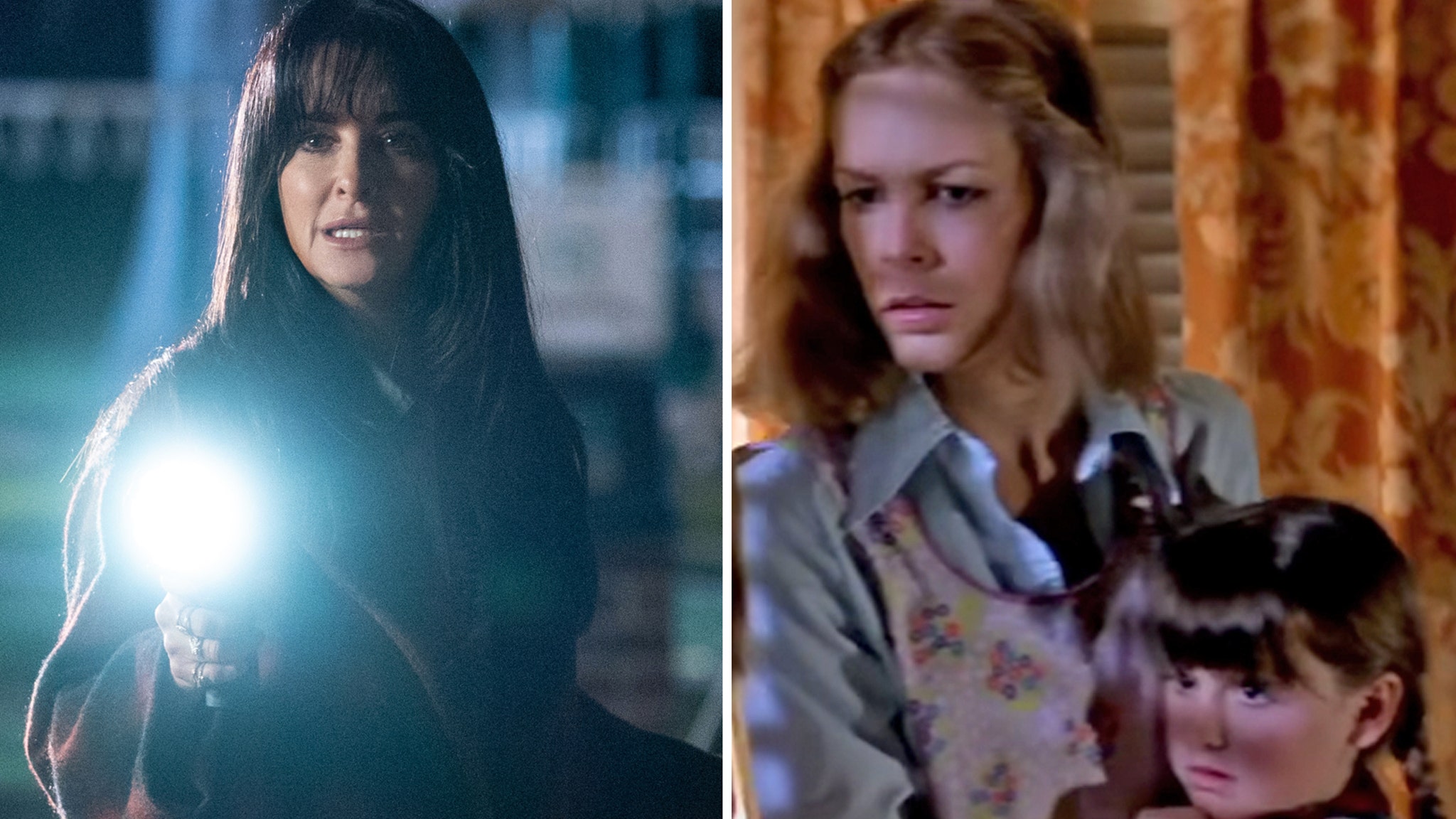 After more than 40 years and at least one false start, Richards faces off against Michael Myers again … and has the broken nose to prove it!

A few familiar faces pop up in the brand new “Halloween Kills,” but some may be surprised to see “Real Housewives of Beverly Hills” star Kyle Richards as one of them.

While a good portion of the population know Kyle from her time on the Bravo series — where she butts heads with the likes of Lisa Vanderpump and, more recently, Erika Jayne — she got her start in showbiz back when she was just a kid with roles on “Little House on the Prairie,” “The Watcher In The Woods” and, yes, the original “Halloween.”

Richards starred in the 1978 horror classic as little Lindsey Wallace, a tot who wound up being babysat by Jamie Lee Curtis’ Laurie Strode after her own babysitter was butchered by Michael Myers. Though Curtis has since appeared in a number of sequels, Richards has not … until now.

“I didn’t have any hesitations,” Richards told TooFab of returning. “I was so excited, and I only got a little nervous when they told me I may be in a swamp with alligators, but other than that, it was very exciting.”

In addition to her return as Lindsey in “Halloween Kills,” out Friday, both Charles Cyphers and Nancy Stephens are back as well, as Sheriff Brackett and Marion Chambers, respectively. Anthony Michael Hall, meanwhile, steps into the role of adult Tommy Doyle, the boy Laurie was babysitting that fateful October 31st.

“Nobody needed convincing,” added director David Gordon Green, who said he didn’t know what to really expect when he started reaching out to people like Richards and the very retired Cyphers to reprise their roles. “Kyle, it’s just so fun to think she was 7, 8 years old in the original film and here she is playing that role and slipping into an echo of the Laurie Strode character.”

Richards told TooFab that getting back into character was “like riding a bike” for her and she had no concerns about taking on such a meaty role after years of smaller parts and reality TV stardom. “I felt very comfortable from the second I got on the set, and I loved every minute of it,” she continued, “even though we were filming all night long, went to work at 5pm, coming home at seven in the morning, I just felt so excited every day, I didn’t even have a chance to feel tired!”

While Richards and her family — sans husband Mauricio — are horror buffs, Kyle said she didn’t really keep up with the franchise after her first film. “I saw [Halloween II] and then maybe one other, but then, no, I really do get scared,” she explained, adding that she, of course, also saw the 2018 “Halloween” reboot.

The 2018 “Halloween” was a direct sequel to the original and ignored all previous sequels, reboots and remakes. “Kills” takes place the same night, moments after Laurie, her daughter Karen and granddaughter Allyson leave Michael for dead in a burning home … only for him to find his way out. This new trilogy of films will conclude with the upcoming “Halloween Ends,” supposedly due out next October.

While “Kills” marks Kyle’s return for the first time, it’s not the first attempt to bring her back to the franchise. “There was one point was that they wanted me to come back,” she told TooFab, without revealing which film it could have been. Worth nothing: There is a teenager named Lindsey in “Halloween 4,” who was allegedly supposed to be Lindsey Wallace and cut for budget reasons, but she only appears briefly.

“And I went and met with them and then they changed everything around and then it ended up not happening,” Richards reveals. “So when it finally came to fruition, I was really, really excited and grateful.”

“Kills” began filming in North Carolina during the fall of 2019, with Richards saying it was “just so, so exciting” for her to get to set and back into character as the adult version of Lindsey Wallace.

“Honestly, I was just so thrilled to be there and so excited to be acting, do what I love to do most and get a chance to have this moment to reprise my role with the people that I really admire and respect,” added Richards. That list of people she admires includes Jamie Lee Curtis, who was equally thrilled to have her back.

While she noted the two stars “are not girlfriends” in every day life, Curtis texted Richards when she found out she’d be back, saying she was “so excited” for her return. When they saw each other for the first time one set, however, Curtis said, “We cried.”

“I mean, we just cried,” Curtis told TooFab. “There are a lot of people we’ve lost, a lot of time and tide has happened for all of us … life goes on and life is in session, so I would love to be able to come up with something quippy and cute, but the truth is, we cried.”

Slightly less emotional — and a little more painful — was Kyle’s reunion with Michael. Richards previously revealed she broke her nose filming a fight scene with the actor playing the masked maniac, before detailing her nose job on “Real Housewives.” Having seen the movie here at TooFab, it’s easy to see where that could have happened — as Lindsey has some intense moments with the serial killer during one chase scene in particular.

“I was very looking forward to that scene that night and when I hurt myself I got a little nervous,” Richards recalled. “And then I was like, ‘Well, I don’t know …’ and I went up to the director and he was like, ‘The sun’s about to come up, you got to get in there,’ and I was like, ‘Oh god, there’s no time to discuss how much my nose hurts'”

“I don’t want to have stunt double to take my job,” she remembered thinking, “So I’m just gonna get there and do my thing.”

One of the best things about Kyle’s big scene is how headstrong Lindsey is. The whole movie shows how much the events of the 1978 film affected the entire town of Haddonfield, Illinois — and it’s clear Lindsey, like Laurie, is ready to fight back.

“I was really excited about that,” she said of Lindsey going into fight mode in the film. “You have to imagine that you’ve gone through something like that as a child and you’re in this town, you’ve never left, with all these people who have bonded over being terrorized. Yeah, I was excited about having my moment with Michael Myers.”

When Kyle’s return was announced and the first footage of her in action appeared in one of the earlier trailers for the film, the memes blew up on Twitter. While some were simply shocked to learn Kyle was in the OG film — “I always find that funny,” says Richards — many pulled out “Real Housewives of Beverly Hills” gifs in celebration.

“I’ve seen so many memes now, and it’s really nice to see Halloween fans and the Housewives fans kind of merge and unite over this excitement,” Kyle said of the online fervor for her return. “They have to see this movie and I’m really excited for the Housewives fans to see it because it’s like introducing a whole new group of fans to the franchise.”

The new movie is also the first time she’s introduced her youngest daughter, 13-year-old Portia, to the series as well.

“She never saw the original because I would never allow her because there were nude scenes, but she thinks this one is absolutely terrifying,” said Richards. “It was really fun seeing it together with her. I only took her with me to see the screening.”

We’re not spoiling Richards’ fate in the film here, but outside of the “Halloween” series Kyle said being in the film did relight a fire in her for even more acting gigs. “I’ve always kept my foot in the door,” she said, adding that any acting gigs are always “time permitting” because of her Bravo obligations.

“This is the first time I said, ‘Okay, I have to leave for a while. I’m making this movie,” she explained. “And first they were like, ‘Well, how long will you be gone?’ But, it for sure did [reignite that passion] and I’m really excited about doing that.”

In addition to “Halloween Kills,” Richards also has a Christmas movie dropping around Thanksgiving … and a four-part RHOBH reunion kicking off this week.

“Halloween Kills” premieres Friday, October 15 in theaters and on Peacock.