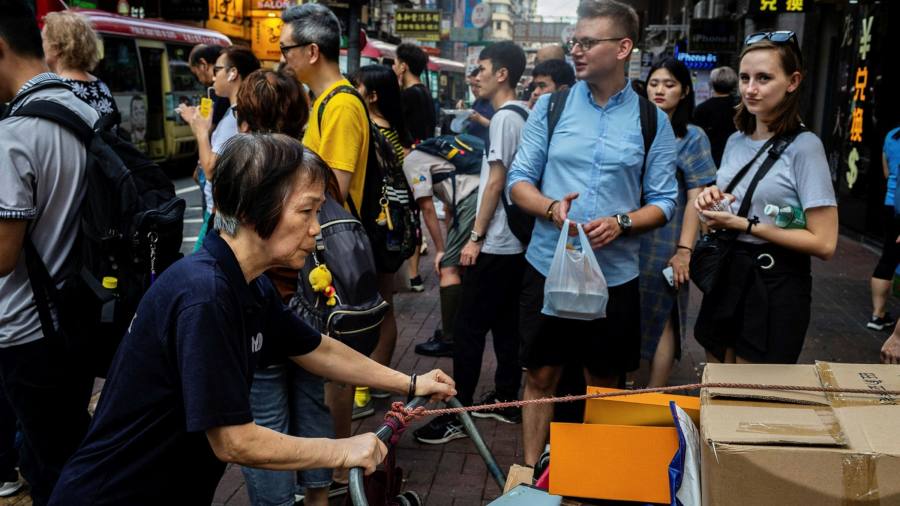 Cheung Yuk-fong spends her day collecting discarded packaging for re-sale, a growing industry in one of the world’s most unequal cities, Hong Kong.

“There seems to be more people scavenging cardboard these days . . . compared to a few years ago,” she said. “Once somebody places cardboard scraps on the streets, they will be gone. It is so difficult to make a living.”

The 70-year-old is one of Hong Kong’s “cardboard grannies”, elderly people living in poverty who scour the city for waste boxes and scrap, even in the glitzy business district, to sell to local recycling businesses.

A day’s toil on the streets means they can earn up to about HK$60 (US$7.69) — barely enough to buy two meals in a fast-food restaurant in one of the costliest cities in the world.

The elderly workforce — estimated by civil society groups to number in the thousands — has long been a presence in Hong Kong, but it is said to have grown amid widespread job losses and the coronavirus pandemic.

“The pandemic [has] not only increased unemployment, but also increased [the number of people] who are underemployed,” Wong Hung, associate professor at the Chinese University of Hong Kong’s department of social work, who specialises in poverty, said.

Despite the Chinese territory being one of the most affluent cities in Asia, Hong Kong’s poverty rate hit a 12-year high this year. According to the government’s annual poverty report released in November, almost one in four of Hong Kong’s 7.5m population lives in poverty. Some 584,000 elderly citizens, or about 45 per cent, live below the poverty line set at a monthly income of HK$4,400 (US$564).

Unlike some Asian countries, Hong Kong does not have an official retirement age but people generally give up work at around 60 or 65 and are supported by a compulsory pension system. Yet many people with insufficient savings complain it is not enough, despite additional government support for the poorest.

“The high poverty rate especially among the elderly is unacceptable . . . which is a particularly serious situation in Hong Kong,” said Sze Lai-shan, deputy director of the non-governmental Society for Community Organization, which assists many from the city’s needy community.

“For the working elderly, their income was already lower than others before the pandemic . . . and many have been sacked over the [past two years],” she added.

Touted as Asia’s financial centre, the former British colony boasts a gross domestic product per capita higher than Japan and South Korea, while as of October its fiscal reserves stood at more than HK$800bn. But following the citywide pro-democracy protests in 2019 and a “zero-Covid” strategy that has been in place for almost two years, the economy has had to cope with fewer tourists and a business exodus.

Local officials argue that fewer people are living in poverty after the government’s one-off and recurrent support measures, including providing cash handouts and housing subsidies to the poor. But Wong, from the Chinese University, said that claim was “subjective”, as some of the government policies had only relatively short-term effects. Many of the needy population found themselves “still living in poverty and [amid] a deprived situation”, he said.

If Cheung Yuk-fong — who despite her age works as a part-time security guard — is lucky, she can boost her monthly income by more than HK$1,500 (US$192) by selling used packaging. Most of her official salary goes to paying the rent for a 100 sq ft subdivided flat in one of the poorest districts in the city, Sham Shui Po, at a cost of about HK$6,000 per month.

Tang Yu-chun, 72, is another “cardboard granny” who collects cardboard almost every day, starting at the break of dawn and often working until early evening. Despite suffering from back pain and receiving some government allowances, she said she “must still carry on” to make ends meet and pay the rent at her 70 sq ft partition flat.

Like Tang, who is divorced with a son who lives in mainland China, many elderly Hong Kongers live alone and have no support from their families.

In a city with some of the world’s least affordable property, there is a shortage of public housing. Families have to wait an average of 5.9 years for a public flat, according to latest official statistics, while the wait is slightly shorter for the elderly but is still at an average of 3.8 years. More than 226,000 people live in poor conditions, including in tiny subdivided flats.

Beijing this year pledged that Hong Kong would eliminate poor-quality housing by 2049. Luo Huining, head of China’s liaison office in the city, paid high-profile visits to poorer families in September and said he felt “heavy-hearted” after witnessing their living conditions.

But many of those living in poverty said they had insufficient support from the authorities.

According to official data, out of 275,000 children aged below 18, roughly 27 per cent, are living in poverty. A recent survey by the Society for Community Organization found almost one in 10 young people had to sell waste cardboard to help their parents make ends meet.

A government spokesman told the Financial Times officials were “keenly aware of the need to continue to implement sustainable measures to improve people’s livelihood”, with plans such as speeding up public housing construction already in place.

However, Wong, from the Chinese University, expects the poverty situation in Hong Kong will “remain the same or even worsen” over the coming year if the pandemic continues.

“Many poor households have already used up their savings and exhausted help from relatives and friends . . . Though the unemployment situation has improved, the working poor situation remains,” he said.