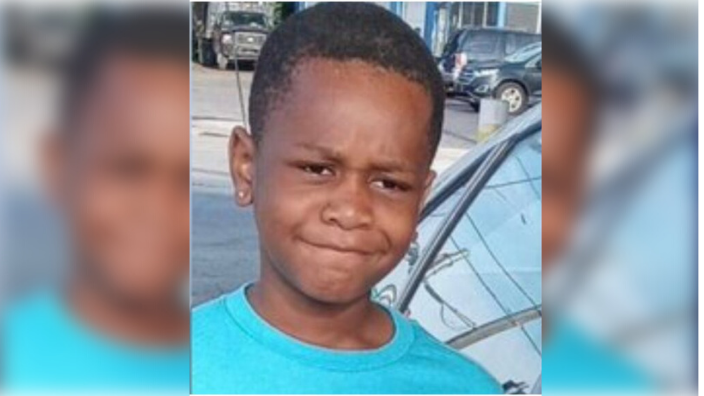 An Illinois family is grieving the loss of an 8-year-old boy who was shot and killed while playing on the front porch of his home.

The tragedy occurred Monday evening in the Chicago suburb of Markham. Demetrius Stevenson was playing outside his house on Homan Avenue when a car pulled up and a man allegedly got out and sprayed the house with bullets. The shooter reportedly fired at a man in the yard, police said, according to ABC7 Chicago.

The shots missed the intended target but struck Demetrius in the head, the Chicago Sun-Times reports. The third-grader was pronounced dead at an area hospital.

“When I looked down, I saw my baby’s head hanging in that door and I screamed,” said Demetrius’s mother, LaTonya Stevenson, the Chicago Sun-Times reports.

The home may have been targeted and authorities said the assailants were firing at the victim’s older brother but LaTonya told the Chicago Sun-Times that the shooter followed a friend of her older son’s home and that individual was the target, not her son.

“We’re looking for suspects,” Markham Chief of Police Terry White told PEOPLE. “We don’t have any suspects identified yet.”

Markham City Administrator Derrick Champion said the target is a gang member and the shooting is linked to gang-related conflict.

“There was an intended target, which was the older brother to the victim,” Champion said.

The investigation into the killing is ongoing.

“We want to send out our heartfelt prayers to the family from the City of Markham and the mayor at this time,” Champion said.

“They shot and killed an 8-year-old that could not defend himself and probably did not even see it coming,” community activist Andrew Holmes told ABC 7 Chicago.

“This is a massive crisis facing our city and cities across the country. I think the FBI data really shows that it’s — we’re not experiencing a national crime surge, we’re experiencing a very specific increase in homicides and shootings,” said Roseanna Ander, Ex. Dir. University of Chicago Crime Lab.

“I think, arguably from a policing standpoint, we make the point that there’s too many illegally possessed guns in the wrong hands,” Brown said.

The FBI reported that homicides across the nation jumped 30% in 2020.