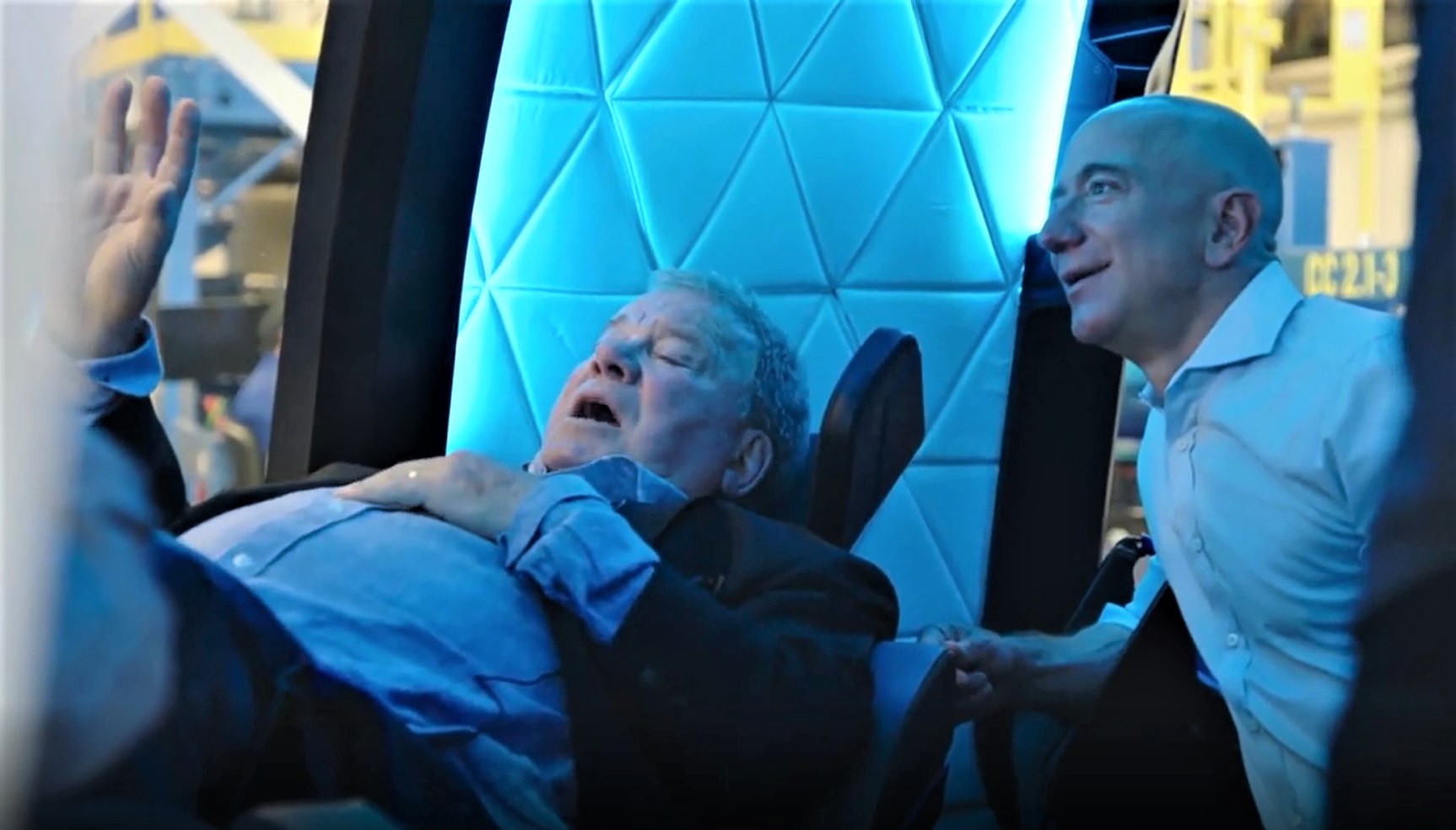 More than a half-century after William Shatner first played a starship captain roaming the galaxy in “Star Trek,” he’s getting a real-life ride to the edge of space — and you can watch the whole episode on real-life communicators, thanks to internet links that didn’t exist when the original TV series was made.

Shatner has had a long Hollywood career since then, including prime-time parts in TV series such as “T.J. Hooker” and “Boston Legal.” It’s been 28 years since he’s starred in a Star Trek movie  But if nothing else, the seasoned actor knows how to milk his signature role.

“It looks like there’s a great deal of curiosity about this fictional character — Captain Kirk — going into space,” Shatner said in a video released today by Jeff Bezos’ Blue Origin space venture. “So let’s go along with it and enjoy the ride.”

If all goes according to plan, Shatner and three shipmates will enjoy their ride in Blue Origin’s New Shepard suborbital spaceship at 9 a.m. CT (7 a.m. PT) Wednesday, at the company’s Launch Site One in West Texas. Blue Origin plans to stream coverage of the countdown via its website and on YouTube, starting 90 minutes before liftoff.

Shatner is clearly the star of the show: At the age of 90, he’s due to become the world’s oldest spaceflier. That would rewrite a record that was set by 82-year-old aviation pioneer Wally Funk during Blue Origin’s first-ever crewed spaceflight in July.

He’s also arguably the highest-profile celebrity to go to space so far — eclipsing Jeff Bezos, who was one of Funk’s crewmates, as well as Virgin Galactic founder Richard Branson, who went on his own suborbital space trip just before Bezos did.

The fact that Shatner is a seasoned actor has made for delicious sound bites, like the quip he delivered during a ride with his crewmates: “I’m so ready, I’m thinking of jumping out of the capsule at apogee. That’s how ready I am.”

The other three spacefliers say they’re ready as well.

The NS-18 crew on the way to the training centre in our @Rivian. Space is so close we can taste it! 24 hours until launch. ????@CaptainClinical @AudreyKPowers @WilliamShatner @blueorigin pic.twitter.com/dyE1BAO4sW

There’s Chris Boshuizen, a former NASA engineer and venture capitalist who co-founded Planet Labs. And there’s Glen de Vries — who was the co-founder of Medidata Solutions, a widely used clinical research platform, and is now an executive at Dassault Systems. Both men are paying undisclosed fares for their flight. The fourth crew member is Audrey Powers, Blue Origin’s vice president of New Shepard mission and flight operations. Like Shatner, Powers is flying for free.

This week’s flight, which is the 18th outing for a New Shepard craft (counting uncrewed test flights), will follow the pattern set by July’s first human flight: The hydrogen-fueled booster will push the crew capsule past the 100-kilometer (62-mile) space boundary, and then separate to make an autonomous landing. At the top of their ride, the four fliers will tumble about during a few minutes of weightlessness and get a picture-window view of the curving Earth.

The roughly 11-minute-long flight finishes up with a parachute-aided touchdown in the Texas desert, not far from the launch pad. An hour or two after landing, Shatner and the newly minted spacefliers are expected to talk about their experience at a news briefing — and get their custom-made Blue Origin astronaut pins.

After July’s flight, Bezos said Blue Origin had racked up nearly $100 million in private sales for future suborbital spaceflights, and a third crewed flight is expected before the end of the year.

Although Shatner’s space trek is sure to rate an entry in the space history books, it’s worth noting that he’s not the first professional actor to go into space. That distinction belongs to Russian actress Yulia Peresild, who’s been on the International Space Station for the past week along with producer-director Klim Shipenko to film scenes for a space-themed thriller titled “Vyzov,” or “Challenge.” Peresild, Shipenko and Russian cosmonaut Oleg Novitskiy are due to return to Earth this weekend.

When Shatner was asked about the Russian project on Fox Business, he gave a classic Hollywood reply.

“The entertainment industry wants to dramatize what’s going on, because what is going on, our liftoff and weightlessness and return to Earth, is very dramatic and filled with a certain amount of possibilities,” he said. “Different outcomes are possible. And to record this, and to dramatize it and to speak about it is very important. So it doesn’t matter which language it’s in — except that there are more people who speak English than speak Russian.”