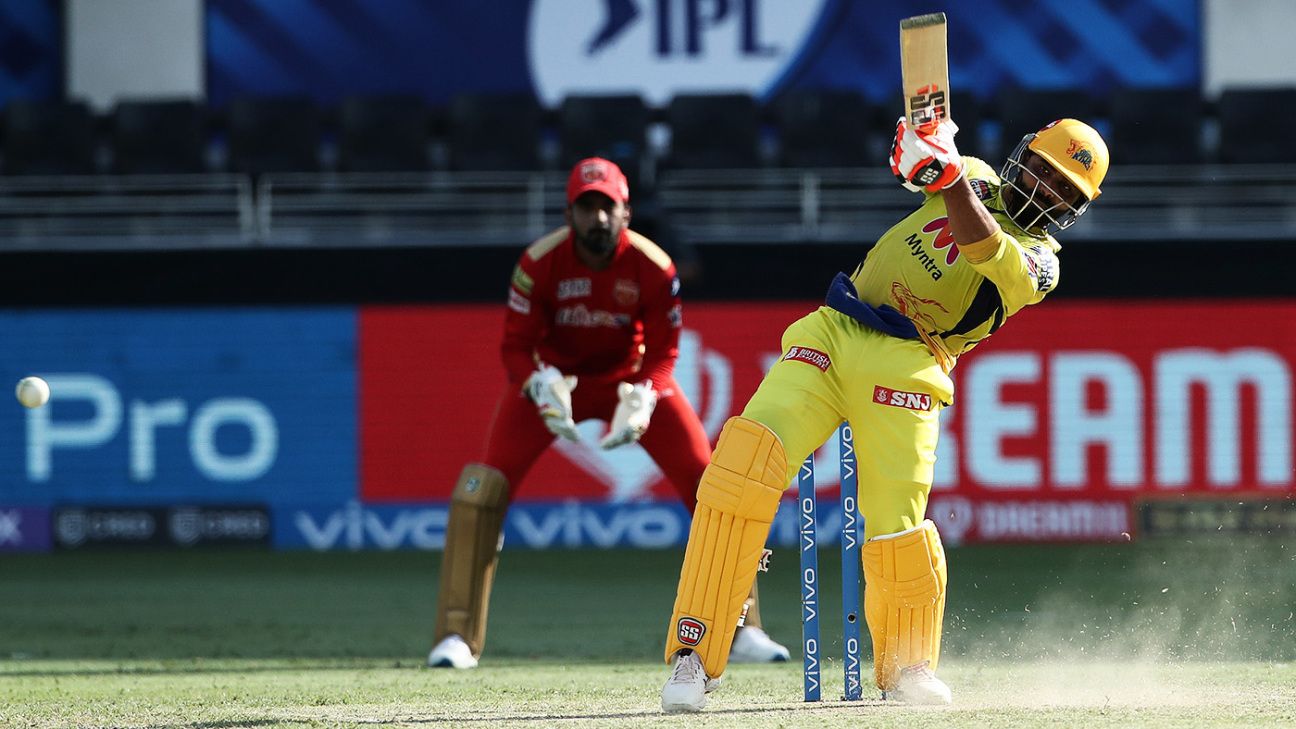 Chennai needed 26 off the last 12 balls. They had lost MS Dhoni and Suresh Raina in the 18th over. The odds were stacked in favour of the bowling team, Kolkata Knight Riders. In walked Ravindra Jadeja to smash two sixes and two fours in the 19th over.

The balls he picked and the shots he played were a reflection of his skills. He has two main scoring methods and areas against pace: get the right leg out of the way and target the region between long-on and square leg; and from the same stance, flay wide yorkers through the point-third-man region. The two sixes in this game were in the former area, and the two fours in the latter. You rarely see him go over covers or long-off, or play the scoop over the short-fine-leg fielder.

About a week later, in the game against Rajasthan Royals, in the 20th over, he decided to go down on one knee before Mustafizur Rahman had released the ball, and played two audacious shots targeting the vacant on-side field. Of course, Jadeja could anticipate Mustafizur’s plan from the field placing, but his audacity in attempting those shots spoke volumes about his belief in his abilities.

In the first half of the season, there was a game against Royal Challengers Bangalore in which he collected 36 runs in the final over.

Harshal Patel was having an incredible season – and match – till that over. It was a slow, gripping surface, the kind suited to Harshal’s skills. As often happens in the death overs, the pressure mounted and the bowler erred. But as much as it was about Harshal buckling under pressure, it was equally about the intimidatory presence of the batter at the other end. We have seen bowlers bowl ordinary balls to the likes of Andre Russell and Kieron Pollard, and viewers scratch their heads wondering why they couldn’t execute simple plans. To some extent this is because when good balls are dispatched for sixes, in a knock-on effect, bowlers end up dishing out loose balls subsequently.

Batting in limited-overs cricket is about the right combination of skills, belief and intimidation. Jadeja’s performances with the bat in the last couple of years indicate that he now has all three.

He has always had the skills to bat, but to convert shot-making skills into consistent run-scoring can be a tricky proposition for someone who bats lower down the order. For lower-order batters, run-scoring has a lot to do with understanding the game situation. It took some time for Jadeja to get properly acquainted with the demands of the role in that respect.

Skills alone can only take you only so far. T20 matches move really fast in the final overs, and even if you have the skills to hit certain shots, it takes immense belief to wait for the right ball to play them. Meanwhile, every passing ball that hasn’t resulted in a boundary increases the chances of the batter trying something that might not necessarily be his strength. You will only wait for the right opportunity if you have an unwavering belief that you can make the most of it when that opportunity presents itself. Jadeja’s approach to batting has started reflecting this belief.

There’s something to be said for allowing yourself a couple of deliveries at the start of an innings to get your eye in as a batter, no matter how dire the situation is – the chances you can make up for those two deliveries that produced only singles are much higher if you’re still around later and in a position to capitalise. The key to batting in the final overs is to give yourself a ball or two at least, but that can only happen if you have immense belief in your skills. We see Jadeja do that regularly now. He’s happy to knock the ball around for singles before setting himself up for an assault.

The last bit of finishing in white-ball cricket is intimidation, which takes serious and consistent effort on the batter’s part. If you have done it a fair few times, the bowlers start spending a lot longer in team meetings, going over hours of footage to see how and where you hit big shots, and, of course, plotting your dismissal. But little do people realise that this practice could also have an adverse affect on the bowler’s psyche, for it helps sow the seed of fear. All it takes is one good shot from the much-studied batter against a bowler who is erring under pressure. Jadeja is fast building that reputation too.