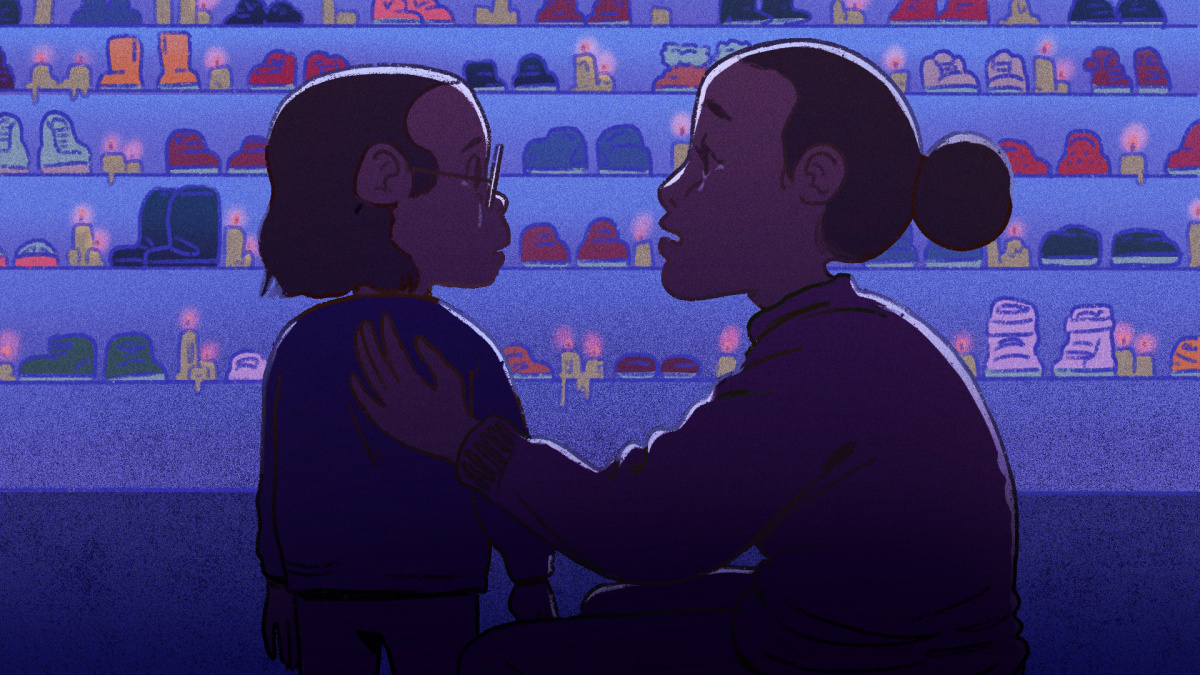 Recently I visited a major art gallery with my family. Before the winding Frank Gehry-designed spiral staircase in the airy open atrium were countless children’s shoes arranged in circles. There were small sparkly running shoes, tiny moccasins, and kids’ sized dress shoes, each representing a Native child who died at a residential school. They represented the little feet that no longer get to run around their Native American communities, playing and chasing one another.

My heart broke when my seven-year old pointed at the shoes and asked me what they were doing there. I explained that those shoes were to remember the children who didn’t come home from school. When she asked why they didn’t come home, I said there was a period of time where schools took small Native kids like my grandparents and my family members, and tried to teach them to live differently. That they weren’t treated well or got sick and some of them died.

She took a beat and quietly replied: “I didn’t know that shoes could be sad.”

Memorials like these began to be constructed in public spaces, church steps, and art galleries, after 215 children’s remains were uncovered with radar tools outside of the Kamloops Indian Residential School in British Columbia, Canada. Those unmarked grave findings, led by the Tk’emlúps te Secwépemc First Nation, kicked off a wave of similar searches on residential school grounds across Canada and the United States.

The recent discoveries and memorials have brought the issue into the public eye, and parents may be facing questions from their kids about this story. Native and non-Native parents alike need to be prepared to answer questions in an age-appropriate way.

Be calm but authentic

Fortunately, there is a wealth of knowledge available on speaking to children about grief. Dolores Subia BigFoot, a child psychologist, and a professor directing the Native American Programs at the Center on Child Abuse and Neglect at the University of Oklahoma’s Health Sciences Center, offers some general rules.

“Acknowledge to children that their curiosity or their question is important, and that you as a parent or as a caregiver that you want to be able to give them an answer, and you may have to work on that answer,” Dr. BigFoot continued.

“For non-Native people, we need to teach those kids about this history and that it was wrong. We need them to understand what happened to us, so we can change things for the future,” says Diindiisi McCleave, the CEO of the National Native American Boarding School Healing Coalition.

Residential schools, or boarding schools, were a part of government policies to assimilate Native American children into white and Christian society. The idea was to “ save the man; kill the Indian,” as said in an 1892 speech from Captain Richard Henry Pratt, who later went on to found the Carlisle Indian Industrial School. Oftentimes the children were forcibly removed from their homes, away from their families and communities. Long braided hair was cut, their clothing was swapped out for drab uniforms, and they were punished for using their native languages, among other indignities and abuses. This isn’t ancient history either. The last residential school in Canada closed in 1996, and in the U.S., there are still 73 schools, with 15 still boarding.

For many Indigenous people whose family members left and didn’t come back, the 215 children in Kamloops were not a surprise, or a discovery. And it was just the beginning. As the months went on, that number passed into the thousands, as other residential school grounds were inspected. In June, it spurred U.S. Interior Secretary Deb Haaland announced an investigation into that country’s own history of Native American residential schools.

“The Interior Department has begun its investigation into the loss of human life and the lasting consequences of residential Indian boarding schools as outlined in the Secretary’s memo,” said Giovanni Rocco, the U.S. Department of the Interior’s Deputy Press Secretary, in a statement.

“In late fall, we expect to begin Tribal consultation, where we will discuss ways to protect and share sensitive information, and how to protect grave sites and sacred burial traditions.”

Earlier this summer, nine bodies left Carlisle Indian Industrial School in Pennsylvania and made their way home via caravan to the Rosebud Sioux tribal lands in South Dakota, with ceremonies and a big homecoming.

“For Native people, we need to acknowledge that this happened to us. And remember the children we have in our care are a gift and care for them in a way that perhaps our grandparents weren’t able to,” said McCleave.

Organizations like the National Native American Boarding School Healing Coalition have been putting in the work since 2012 to educate people on boarding schools and to pave the way for healing. Parents need to acknowledge their children’s feelings about learning this history and help them process it, she says.

“Native children [today] wouldn’t have that firsthand sense of loss because we’re talking about bodies being recovered,” says Dr. Lahoma Schultz, an enrolled member of the Muscogee (Creek) Nation and a licensed psychologist and licensed professional counselor in Oklahoma and Arkansas. She has spent years speaking to Native children about grief.

“What they’re going to feel is what the adults around them are feeling. That’s where the feelings of grief are being generated because some of us lost a parent or grandparents or had grandparents or parents that attended the old boarding schools,” Dr. Schultz says.

Speaking to children about these unearthed mass graves requires a specific approach. “The unique part of this is why are there graves at a school because most kids don’t associate children dying at a school and being buried on the school grounds,” says Dr. Bigfoot.

To get them to understand, Dr. Bigfoot says it might be necessary to share that at one time, kids went to school, and they didn’t have their moms and dads with them. Someone else took care of them, and sometimes those people didn’t take care of them in a good way. Some kids got hurt, and some of those kids died.

That short of an explanation can sometimes suffice, but depending on the child’s curiosity or emotional capacity, there may be further questions of “why,” which can lead to a discussion on how kids a long time ago didn’t have many of the choices that kids have today.

Dr. Bigfoot advises not just telling kids a story and closing the door, but incorporating what we’re doing today about it. “That’s why I’m working to take care of my family, the best way I can, because at one time grandparents and great grandparents didn’t have a choice,” she says.

And whether the conversation is triggered by other factors in front of the child – catching a news story, overhearing a conversation, or coming upon a memorial – or is initiated by the parent themselves, Dr. Bigfoot says that it’s important to always leave the opportunity for the child to bring it up whenever they want to.

If that door is opened a bit by a book, TV show or other piece of media, Dr. Bigfoot says that’s perfectly acceptable. “Bambi losing his mom, or [Simba’s dad dying in] The Lion King, all of these are about loss and grief, so it’s not a foreign story or emotion for children. The critical part is that you talk afterward about evidence of things that came out of that, to make life better, and saying what are we doing about it today.”

Below is a list of media options that could serve as jumping-off points for families.