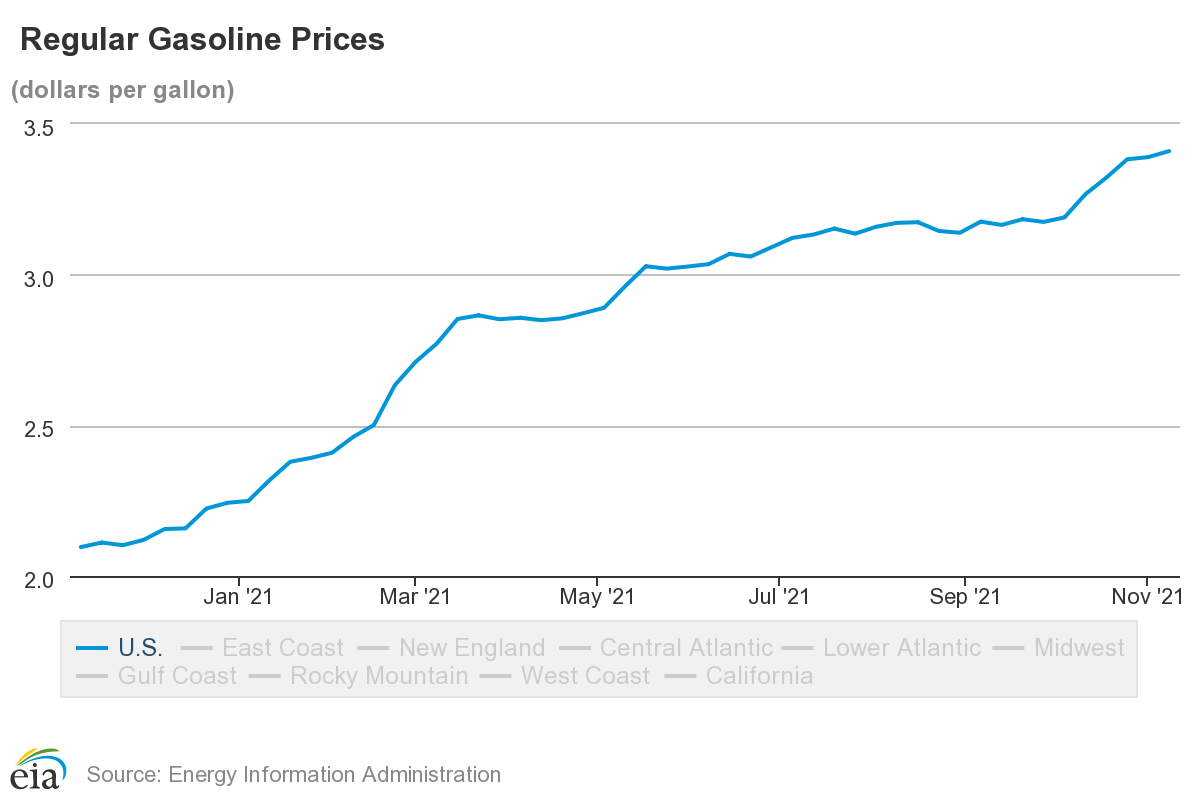 This tweet lit up the internet a few weeks ago.

“A gallon of milk was $1.99. Now it’s $2.79. When you buy 12 gallons a week times four weeks, that’s a lot of money.”@EvanMcS goes grocery shopping with the Stotlers and shows us how badly inflation is hitting the middle class. pic.twitter.com/39hPPRHLja

I’m not going to dunk on the Stotlers, who have nine children, seven of who are adopted or fostered. Using this information alone, I’m guessing they’re decent people. Twitter was so outraged by how much milk they claimed to drink that they didn’t bother looking at the price they claimed to pay

Their story has a happy ending.  Thanks to Dallas-based Oak Farms Dairy, which will provide them with free milk for the next year, they won’t have to worry about the $20 monthly increase.

Not everybody is so lucky.

An extra $20 a month might not sound like a big deal until you consider that it’s not just $20. Milk isn’t the only thing getting more expensive.

Consumer prices rose 0.94% in October from the previous month, the largest jump since 2008.

Everybody has different consumption habits, so we all feel inflation differently. You might not notice milk going up, but if you’re a driver of one of the 276 million registered vehicles in the United States, you’ve definitely felt it at the pump. Prices were 6.1% in October alone and are now up 64% over the last year.

This chart above is jarring but requires some context. Due to the pandemic, prices were especially low last year. Gas prices hit a 4-year low in May but are now at a 7-year high.

So how much does the rising gas cost us? The average American drove 14,263 miles in 2019. If you assume the average car holds 24 gallons and gets 23 miles to the gallon, then the $1.31 increase will cost the average driver an additional $69 a month over the last year. Not nice.

It’s not just milk and gas. We do more than drive cars and eat cereal, which rose 3.3% from September to October, the highest increase since February 2007.*

The question now is, where do we go from here?

Matthew Klein showed that “most of the volatility of the monthly inflation prints can be explained by prices spikes and declines in a small group of pandemic-sensitive categories.”

Here is a cleaner version of the same chart.

The CPI is 5.5% higher in October than it was in January, but it would have been just 2.1% higher if the pandemic-disrupted categories—which normally contribute very little to changes in the total price index—hadn’t had such a massive impact. Once the underlying problems affecting a few specific categories naturally resolve themselves, the pace of CPI inflation we have experienced thus far should slow back to normal.

We know why there is inflation, but we don’t know where it goes from here. Like, when do supply chains return to 2019 levels? How long is inflation going to run at 4-6%? What if it takes longer than the average American is willing to wait, which could put pressure on people who control monetary policy. What if they raise rates prematurely? And what if that throws the economy into a recession? But what if inflation keeps up like this and they don’t raise rates? Then what?

I think the pace of inflation will slow over the coming months.** The bond market seems to think so too. Inflation is terrible for bonds because rising prices hurt fixed payments. In theory, if the bond market were worried about inflation, rates would increase. That isn’t happening.

Inflation sucks. Nobody likes higher prices. But we have to put all of this into context. It’s not as if everybody is getting crushed. In a story at the Washington Post, Jeff Stein and Heather Long write:

Most families have more financial resources than they did before covid, especially among the bottom third. Even when accounting for inflation, disposable income has been roughly 9.5 percent higher in 2021 than it was before the coronavirus pandemic hit in 2019

I didn’t think inflation would be this big a story. In fairness to me, I don’t think too many people anticipated the supply chain issue, but whatever, I was wrong. It looks like this story will continue to dominate headlines, for better, hopefully, and not for worse.