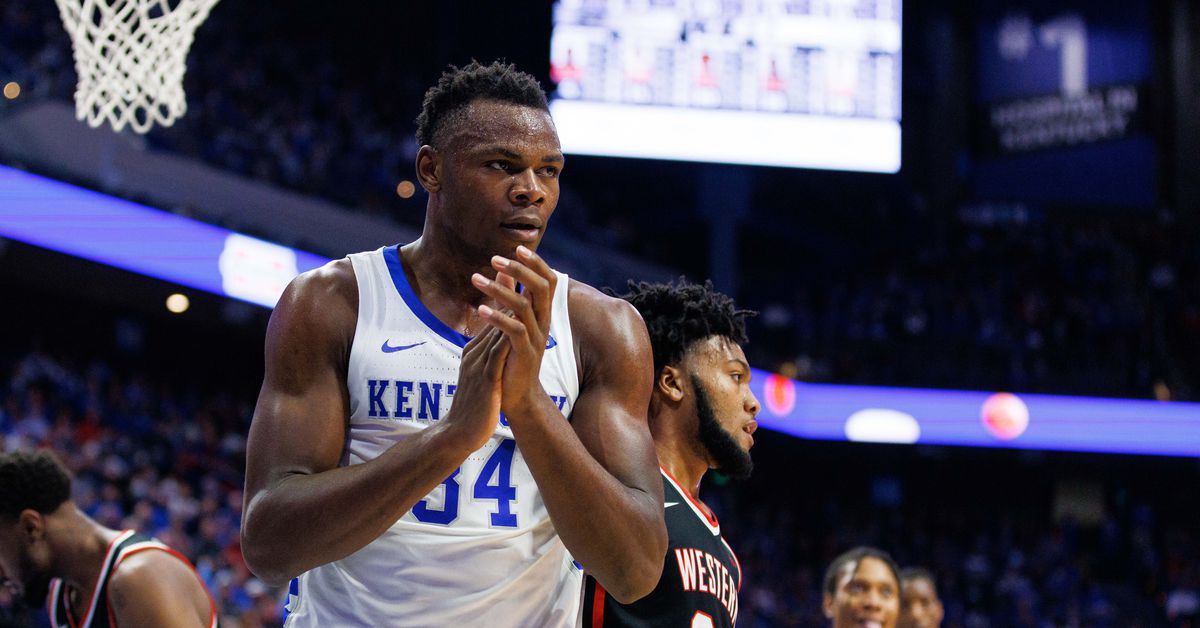 It’s easy to view Oscar Tshiebwe as the type of basketball player the modern game has tried to weed out. There isn’t supposed to be room for a 6’9 center who has never attempted a three-pointer in 50+ college basketball games and has nearly three times as many turnovers in his career as he does assists. He’s at a height deficit against most centers by at least a couple inches, and he certainly doesn’t have the perimeter offensive skills every coach now demands out of their power forward.

Yet in his third year of college basketball and his first at Kentucky, it’s becoming apparent that Tshiebwe is the sport’s most dominant force. He is at once both a throwback and an original in the game: someone who plays like bigs from decades earlier while doing it as well or better than anyone ever has.

Tshiebwe came to the United States from the Congo at the start of high school to pursue a future in basketball — a sport he had only started playing a year earlier. At Pennsylvania’s Kennedy Catholic, he blossomed into a McDonald’s All-American and borderline five-star recruit because of his hulking frame and non-stop motor. He chose West Virginia over Kentucky and became one of the better centers in the Big 12 as a freshman, yet he never seemed like a perfect fit for Bob Huggins’ hyper-aggressive defensive schemes.

Tshiebwe decided to transfer halfway through his sophomore season last year and ultimately picked Kentucky thanks to the relationship he once formed with John Calipari on the recruiting trail. He knew his main responsibility would be rebounding. Last year’s Wildcats struggled on the boards — finishing No. 269 in defensive rebound rate — despite boasting the fifth tallest lineup in the country, per KenPom.

Tshiebwe has essentially fixed that problem by himself to start this season.

Tshiebwe’s rebounding supremacy faced its biggest test of the season on Wednesday night against Western Kentucky. The Hilltoppers were Kentucky’s fill-in opponent after their annual Dec. showdown with arch-rival Louisville was cancelled because of the Cardinals’ Covid-19 outbreak. Western Kentucky was no easy matchup: they had upset Louisville only a few days prior, and they had a 7’5 center in Jamarion Sharp manning the inside.

Could Tshiebwe really own the glass against the biggest player in the country? Please. As Kentucky took home a 95-60 win, Tshiebwe put up one of the most remarkable stat lines of the season: 14 points and 28 (!!!) rebounds, grabbing more boards than the Hilltoppers all by himself. Seriously.

When it was over, he paraded around the stadium with a sign celebrating his big night.

That is the most rebounds by a Kentucky player since 1976 and the most ever by someone at Rupp Arena — breaking a record held by none other than Shaq. It’s an undeniably impressive accomplishment for Tshiebwe, but it’s merely the tip of the iceberg when it comes to his ridiculous rebounding season.

Tshiebwe is No. 1 in both offensive and defensive rebound rate in the country right now

No player has done that since Kenneth Faried in 2010-2011, and he was playing at mid-major Morehead State.

To watch Tsheibwe this season is to see a lot of plays like this:

Modern basketball has given us plenty of “lost arts” over the last few years — the lost art of the mid-range game! The lost art of the post entry! — but rebounding exists on a different sort of level. Players with an elite skill in other areas of the game like rim protection, point of attack defense, and especially three-point shooting can get drafted off that one skill. Rebounding on the other hand often feels like something a coach is willing to sacrifice to get more of something else — speed, shooting, transition defense, whatever. As teams have started taking significantly more threes, the types of rebounds that are available have changed. Guards will often put up bigger rebounding numbers now because missed threes tend to travel further when the clank off iron, soaring past the giants in the paint.

Rebounding has always been about more than height. Dennis Rodman taught us that. If Tshiebwe is a little short for a center, he certainly isn’t lacking in size: he has a monstrous 7’4 wingspan, and a strong 255-pound frame. Tshiebwe’s biggest advantage feels like his energy. He is simply indefatigable on the glass, seeming to possession a sixth sense for where the ball is going to bounce, and then having the strength and toughness to carve out enough space to grab it once it’s available. That motor isn’t limited to the glass: Tshiebwe runs the floor hard in transition, he makes sure he gets contact on screens both on and off the ball, and he can cover ground quickly on his defensive rotations when he needs to.

But the rebounding. The rebounding really stands out. Remember when we mentioned that Kentucky struggled on the glass last season? Tshiebwe already has more rebounds (170) in 11 games than Kentucky’s leader last season (first round pick Isaiah Jackson) did in 25 games. He has more offensive rebounds this year than four entire teams!

Oscar Tshiebwe has 64 offensive rebounds this season. No other player in NCAA has more than 50, and Oscar has more than 4 entire teams do.

His offensive rebound rate of 24 percent would the highest ever since KenPom’s database started in 2003-2004. If he ends the season averaging 15 rebounds per game, he’ll be the first men’s college basketball player to do that since 1980.

Kentucky is now No. 1 in offensive rebounding and top-25 in defensive rebounding. The Wildcats still don’t take many threes — they’re No. 344 out of 358 teams in three-point rate — but all the extra possessions Tshiebwe helps secure makes up for it. The Wildcats are up to No. 11 in KenPom’s overall efficiency rankings and are quietly starting to look like a Final Four threat following their opening night loss to Duke and a shocking defeat at Notre Dame earlier this month. At the moment, Tshiebwe is No. 2 in KenPom’s national Player of the Year metric.

NBA teams want their centers to space the floor, to soar above the rim for blocks, to be able to beat a double team with their passing when their ball handler gets trapped coming out of the pick-and-roll. That’s not Tshiebwe’s game. Instead, Tshiebwe simply never stops coming for the damn ball, and not even a 7’5 guy is going to stop him from getting it.

There will be an opportunity for Tshiebwe to prove he can be an NBA player whether he’s drafted in the first round or not. Discount his elite skill if you want. Oscar Tshiebwe just keeps going.