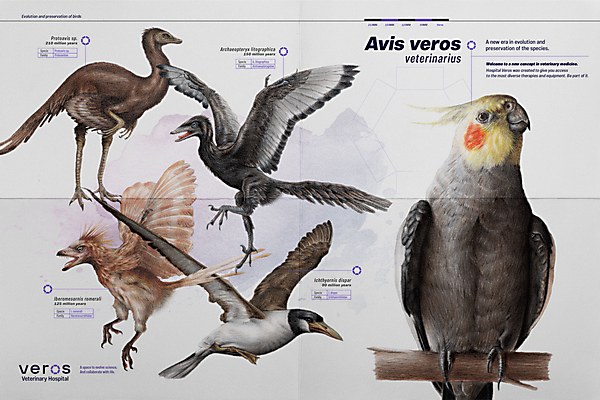 Background: This project was born from the mission of veterinary clinic Hospital Veros, which is always looking for the next evolution in veterinary medicine. It is a new, contemporary hospital that needed an attention-grabbing campaign different for its category and empathy with its target audience: veterinarians.

Design thinking: To visualize this evolution of veterinary medicine that the hospital offers, there was nothing more favorable than to bring to light the evolution of animal species. This correlation was in perfect harmony with the customer’s objective and materialized in a proprietary concept.

Challenges: Finding an illustrator who met our expectations. Lucas Souza was our star partner in this project: in addition to being an excellent illustrator, he is a paleontologist and a historian. With him on our team, we were able to re-create the appearance of extinct species from studies and build a campaign with a lot of history for the client.

Favorite details: We’re proud of the campaign as a whole, but the details within it make all the difference. The detail within each illustration, the research on each species and its peculiarities, as well as the spectacular craft in the final result are some of the reasons we love this campaign.

New lessons: We learned daily during the production process, as for each species, Souza would supply us with a story about it. We learned countless facts about animals and their centuries-old relationships with humans.

Visual influences: The campaign was inspired by old encyclopedia pages. Going back in time while researching the species we were highlighting, physical books, in addition to stroke and layout styles, served as a reference to create this rich campaign—and with a high level of craft in the illustration unique to this category.

Specific project demands: This project came out of a proactive one that McCann offered our client. It became a great success story, as that initiative gave rise to this campaign, which brought us so much pride and strengthened our relationship with the client.