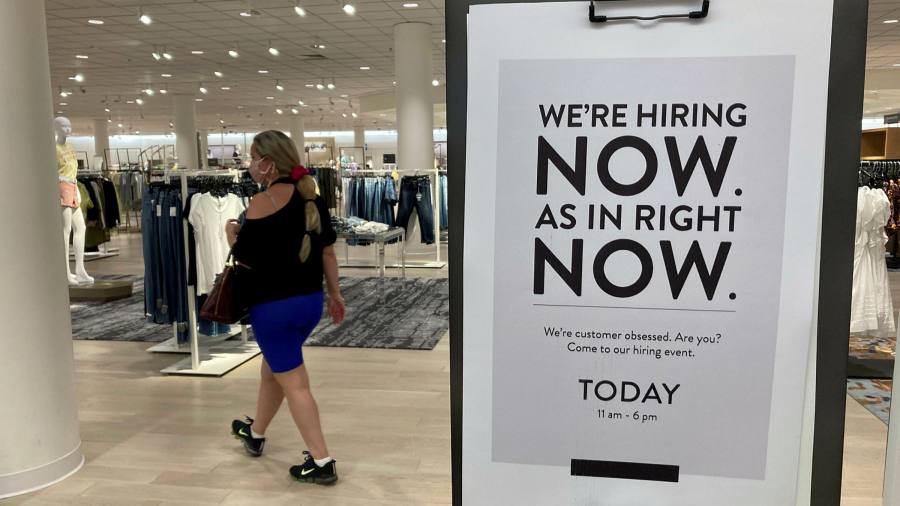 For months, economists predicted that Americans would return to the workforce en masse in September as vaccinations increased, schools reopened and federal unemployment benefits expired.

But those predictions were upended when only 194,000 of the 500,000 jobs expected to have been created last month materialised — the least since the start of the year — even while the unemployment rate dropped to 4.8 per cent, the lowest since the pandemic began.

Economists blame a surge in Covid-19 driven by the more contagious Delta variant for upending their predictions for a labour market resurgence and holding up a broader return to normal.

“I have a sense of déjà vu where economists have been perpetually over-optimistic about when the labour market is going to lift off and when we’re going to see these workers flood back into the labour force,” said Daniel Zhao, a senior economist at jobs site Glassdoor, an online jobs board.

“I think to some extent, there is a valid reason why that hasn’t happened,” he added. “We know that even though schools did reopen, the Delta variant was at its peak in September so we shouldn’t have expected our forecasts to be accurate in the context of the Delta variant.”

Even as job growth roared back earlier this year, the total percentage of Americans participating in the labour force has been relatively unchanged since the first round of lockdowns began to lift last year.

That trend persisted in September, with a 61.6 per cent labour force participation rate, hovering in the same narrow range where it has stalled since June 2020.

The delta-driven jump in infections has cut down on job hunting, even though many large employers are desperate to hire. Retailers especially are eager to add jobs ahead of the holiday season and are raising wages, but September’s data indicates that some Americans are still hesitating even with job openings at a high.

The labour department reported that 1.6m Americans said they were not looking for work because of the pandemic, 107,000 more than in August and the first increase to that figure since January.

The 309,000 women who stopped working or looking for work last month accounted for an outsized proportion of labour force dropouts, likely due to caregiving responsibilities as the Delta surge interrupted some school reopening across the country.

“It is almost always the case that the binding element in terms of the labour market is the demand for workers, [and] the presumption in all models is that there is always enough supply of workers and there are always people that can be drawn into the workforce to the extent that there is demand for it,” said Stephen Stanley, chief economist at Amherst Pierpont Securities.

“What we have seen during the pandemic is a labour shortage at the same time that we’ve had a high unemployment rate. You’ve never seen that before.”

President Joe Biden on Friday also blamed the pandemic in a speech from the White House, saying that the jobs report did not paint an accurate picture of the current labour market.

“Today’s report is based on a survey that was taken during the week of September 13. Not today, September the 13th — when Covid cases were averaging more than 150,000 per day,” the president said. “Since then, we’ve seen the daily cases fall by more than one-third and they’re continuing to trend down, and we’re continuing to make progress.”

Biden also touted the larger than expected fall in the unemployment rate last month. But the drop was not entirely due to unemployed workers finding jobs. The total number of workers ticked down, shrinking the denominator of the equation economists use to calculate the unemployment rate.

The mismatch is attributed to shifts in the job market brought on by the pandemic, as the risk of infection altered workers’ calculation of whether in-person work for low wages was worthwhile.

Those same jobs are also the most sensitive to the public health crisis and are often quickly eliminated or furloughed when case numbers rise. The service industry now employs tens of thousands fewer people than it did before the pandemic, despite widespread hiring efforts by employers, and may never draw back workers in large numbers, said Glassdoor’s Zhao.

An analysis by the Financial Times also showed that the end of enhanced federal unemployment benefits meant to help people laid off due to the pandemic also largely failed to drive the 7.5m workers receiving $300 per week back into the job market.

With the numbers of infections and hospitalisations starting to fall, some economists are hopeful that the anticipated autumn rebound could still occur, albeit later than expected. They agree that the recovery is dependent on the Covid crisis.

“This year has been one of false dawns for the labour market,” said Nick Bunker, an economist for jobs site Indeed. “Demand for workers is strong and millions of people want to return to work, but employment growth has yet to find its footing.”