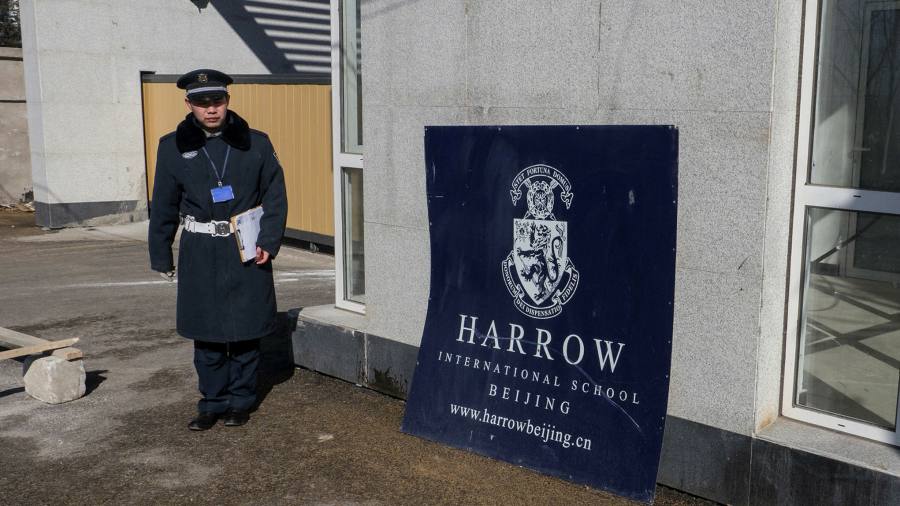 A Beijing school affiliated with the 450-year-old English public school Harrow has been forced to drop its famous brand name as part of a broad tightening of controls on education providers in China.

Harrow Beijing has told parents that the bilingual school will in the future be known by the name Lide. A Harrow representative said the change was due to local authorities enforcing national rules on the naming of private schools that teach Chinese nationals.

The rules are part of an increasingly constrictive regulatory regime that is prompting British schools to reconsider their investment in the mainland Chinese market after more than a decade of rapid expansion.

“The general situation seems increasingly adverse and it is more and more difficult to see how China allows our schools to feel comfortable that their historic vision can be allowed to express itself there,” he said.

The Chinese government last year wiped billions of dollars from the value of listed private education providers when it banned the $100bn-a-year industry from making a profit from core tutoring services aimed at children.

Harrow Beijing is the most prominent British-affiliated school to have had to alter its branding because of the rules announced last year that ban schools that accept Chinese students from using foreign names in their titles, as well as words like “international” or “global”.

Harrow Beijing groups together the Harrow International School in Beijing, which admits foreign passport-holders, an early years school and the Harrow Beijing bilingual school, which teaches Chinese students up to the age of 16.

It is part of the Hong Kong-based Asia International School Limited, which was founded by oil billionaire Daniel Chiu and operates schools in cities including Beijing, Hong Kong and Shanghai.

Other Harrow-affiliated bilingual schools elsewhere in China still used the British school’s brand, but “would be compliant” if local officials in their areas requested they change their names, Asia International said.

Scott Bryan, international director of Wellington College, said there was limited prospect of growth in the foreseeable future even for such separately branded schools.

“Recent legislation means that it is currently very difficult to obtain a private licence for bilingual schools in China,” Bryan said.

Colin Bell, chief executive at COBIS, a group that represents British schools conducting business overseas, said there appeared to be a “tightening of the grip” on foreign-affiliated schools in China.

In November, London’s Westminster School scrapped plans to develop a series of academies in China, citing the coronavirus pandemic and changes to China’s education policies. Westminster had been working since 2017 on plans for a 2,000-pupil school in western Sichuan province, to which it would have provided advice and its brand name.