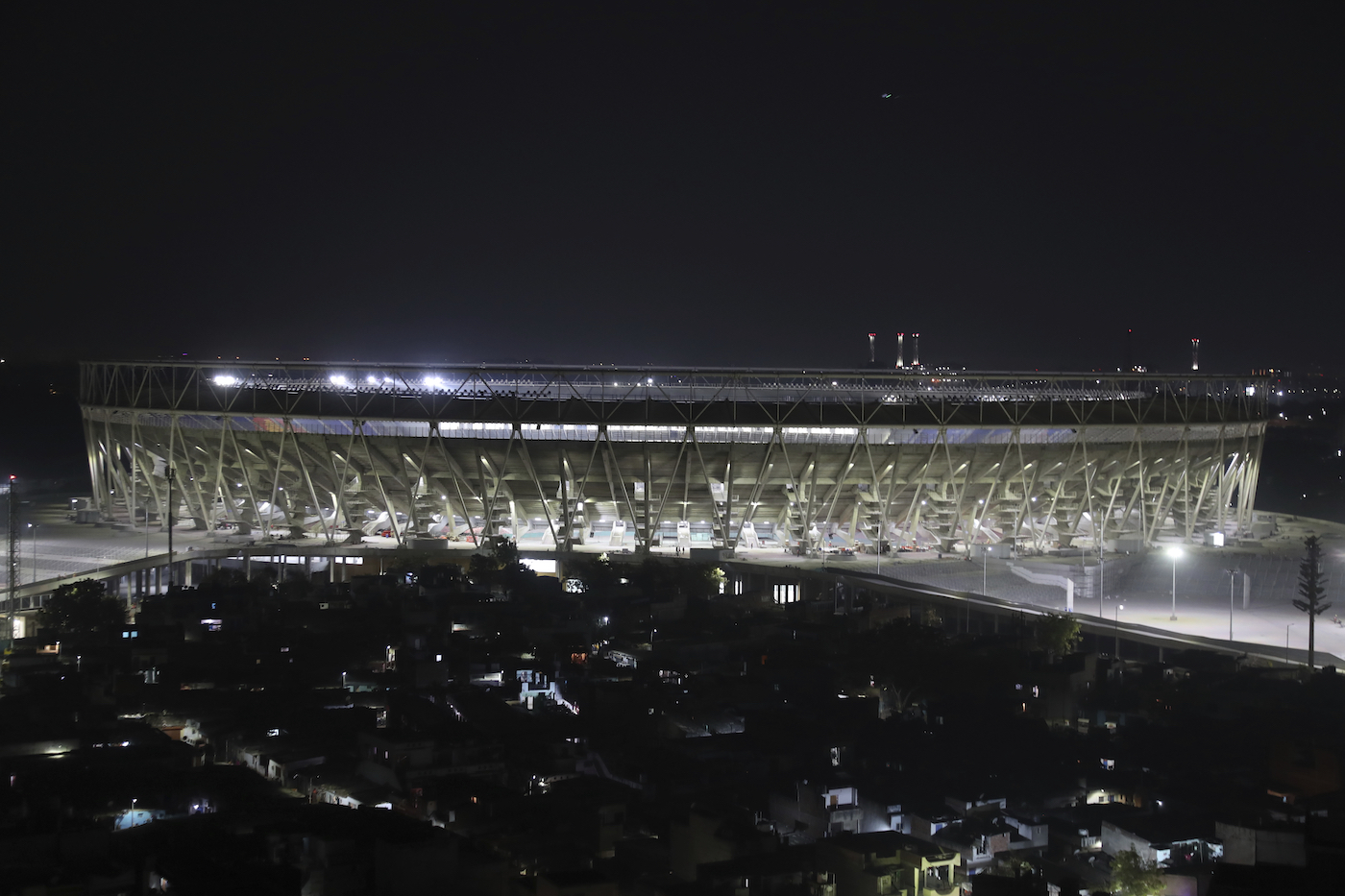 7.30pm Samson wins back-to-back tosses in Ahmedabad and chooses to bat first in the final. The RR captain has a smile on his face, another crucial toss?

Samson: It is a used wicket, we’re playing the second game here and looks dry. Everyone is very positive and excited to play the IPL final in front of this fabulous crowd. Same team.

Hardik: We would’ve bowled first [massive cheers in the background]. Very overwhelming to see so many people come and support us. We want to treat this game as normal as possible and take the right decisions. The boys are chilled out, credit to the support staff. One change: Lockie Ferguson in for Alzarri Joseph

Rohit: “Faf was also happy with Sanju’s decision on Friday. Has Sanju read the conditions better this time as well?”

7.20pm “The bounce here is higher than Kolkata and it’s all about the bounce here,” says Simon Doull in his pitch report for Star Sports. “The ground is slightly shorter on one side and slightly bigger on the other.”

In the USA, you can watch the action LIVE on ESPN+ in English and in Hindi.

Afeef: “GT and RR each have a player in their camp who has won 4 IPL trophies previously – GT have their captain Hardik Pandya, while RR have their fast-bowling coach Lasith Malinga.”

7.10pm The song and dance is over. We’re 20 minutes away from the toss, which could be a crucial factor at this venue. RR captain Samson said as much after they won the second qualifier on Friday. Where the IPL 2022 final could be won or lost – Gaurav Sundararaman tells us

Robin: “I think RR has an advantage here, They played a match here and got a very good feel of the pitch and dimensions whereas GT hasn’t played a match though the build-up is about them playing the final at their home ground. “

AlistairDiamond: “I’m an English Royals supporter in Bulgaria. I’ve ordered in a chicken biryani and I’m ready for the action. But I’m worried because Rashid Khan has got Jos Buttler completely bamboozled. Come on Jos, you can do it one more time!”

Danny: “Ahh, so many thoughts running in my mind… Fielding could be the key today as dropped catches have proved costly. GT hold an edge with their form. They have hardly taken their foot off the pedal. Jos’ wicket will damage RR hopes as he has been their backbone in batting.”

6.55pm Ranveer now cedes the stage to AR Rahman and co. “Yashasvi Jaiswal is singing along with full enthusiasm,” says Karthik Krishnaswamy from the Motera.

Adarsh: “Everyone speaks about RR’s and GT’s bowling line up that helped them reach here however I always believe it’s the number of in-form finishers along with middle-order that help a team win consistently. CSK and MI in past had that. In this season, Pandya, Miller, Tewatia and Rashid helped GT win many close matches whereas Hetmyer, Ashwin and Parag won few matches on their own! “

If you’re into fantasy cricket, here are some expert tips from Dan Vettori

Samraat: “We haven’t had super over yet. Super over to decide this cracking final? Do Anyone fancy this to happen tonight?”

6.40pm Bollywood actor Ranveer Singh is now whipping up a performance for the packed crowd.

Samrat Ahuja: “@Dasitha : Qualifier was perfect for you then! Chahal went wicketless and RR won!! Action replay would do for you!!”

Dasitha: “As a Sri Lankan fan I want RR to win this because of Sanga and Malinga.. But same time I don’t want to see Chahal taking wickets so Hasaranga can have his purple cap.. I’m in bit of a bizarre situation right now.. “

6.35pm Thanks, Hemant. Hello, everyone. Hardik vs Samson. Gill vs Jaiswal. Miller vs Buttler. Tewatia vs Hetmyer. Ferguson vs Boult. Shami vs Prasidh. Sai Kishore vs R Ashwin. Rashid vs Chahal. And Ravi Shastri is kicking off the closing ceremony. Local boy Hardik walks out to massive cheers. This final promises to be a thrilling affair.

Deivarayan Muthu is in the house. And that’s a cue for me to hand over the commentary duty to him.

Celine: “May the best win. I want the match to be a cracker of a game with the winner to be known on bowling the last delivery! That will be a perfect ending to this season’s mighty IPL.” — How about a Super Over?! We haven’t had one this season…so far.

There have been 14 IPL finals since 2008. Take our quiz to find out how well do you remember them.

6.25pm Karthik is already at the venue. “Stands are already packed,” he says. “Will probably be a full house very soon.”

Mustafa Moudi : “Will GT repeat RR’s achievement of Winning the Title in their Debut Season against RR themselves… Or will RR create History by becoming first ever IPL Side to win a trophy under both – Indian Captain and Overseas Captain ?? Surely this final is one of the most exciting finals in last few years !!”

6.20pm If you are in the USA, you can watch the game live on ESPN+ in English and in Hindi.

Afeef: “After 73 matches over the last 2 months, it all comes down to this. I just want to say thank you to the Cricinfo staff for bringing to us the ball-by-ball commentary as well as all the pre-match and post-match coverage. We really appreciate all your efforts!” — Glad you enjoyed our coverage.

Samrat Ahuja: “Old adage of batting wins you matches, and bowling wins you tournament coming to light today. Two strong bowling line-ups squaring off against each other–my best on GT, considering they will get the home support too!!”

shashwat: “An RR win as a tribute to the King SK Warne is the only outcome befitting to this Final!!”

6.15pm Gujarat Titans have made it to the final in their inaugural season, and their director of cricket Vikram Solanki knows they have an opportunity to pull off something special. For Rajasthan Royals, it has been a campaign built on the Shane Warne way of playing cricket, right from the way their spinners have operated to the way they’ve backed their youngsters. Karthik takes a closer look here.

Aabid Ismail: “The last 5 days have gone identically for both teams (WLWWL) this game will truly decide the best of the two teams! “

6.00pm Hello, hello, hello. It’s the D-Day, and we cannot wait for the action to start. So we are kicking off our coverage a little early than the usual. I am Hemant Brar and will soon be joined by Deivarayan Muthu as we bring you all the action from the final game of IPL 2022.

Gujarat Titans will face Rajasthan Royals at Narendra Modi Stadium in Ahmedabad. And we have Karthik Krishnaswamy covering the game from the venue, where a record crowd is expected. But to know what to expect from the men in the middle, do read Shashank Kishore’s match preview.