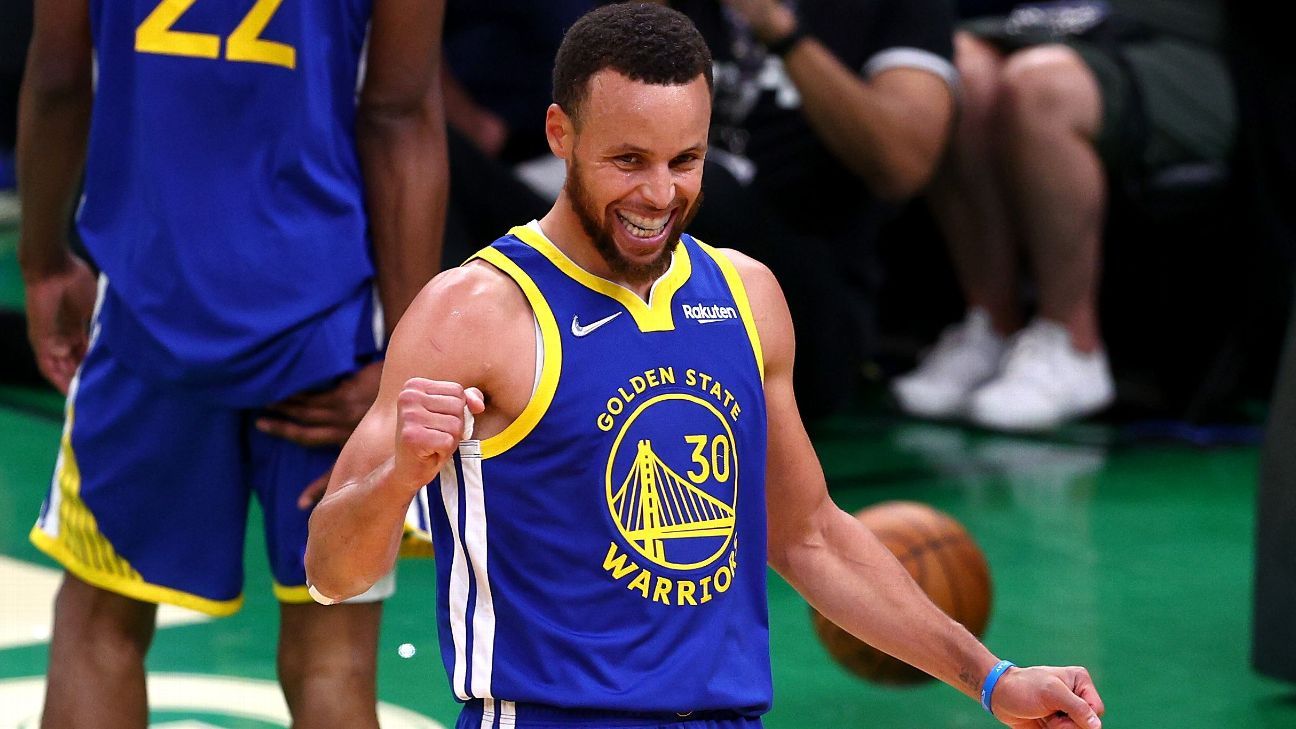 BOSTON — Stephen Curry pulled up from 29-feet out and buried another 3-point dagger before pointing to his right ring finger in the third quarter of Game 6.

Underneath Boston’s historic championship banners and on the Celtics’ hallowed parquet floor, Curry didn’t just put another ring on it but he cemented his future Hall of Fame legacy by joining an exclusive legendary group with his first NBA Finals MVP trophy.

Curry won his fourth championship and the one honor that had eluded him when he was named the Bill Russell NBA Finals Most Valuable Player after leading the Golden State Warriors to a 103-90 win in Game 6 to eliminate the Boston Celtics on Thursday.

Eleven voters from national media outlets voted Curry as the MVP of the 2022 Finals. Curry finished with 34 points, seven assists and seven rebounds in the series clincher, giving him 30 or more in three straight games at Boston. The last opponent to do that in the postseason was LeBron James in 2017.

In six games against the Celtics, Curry averaged 31.2 points, six rebounds and five assists. He shot 48% from the field and 44% from 3-point range.

“You know this is what it’s all about — playing for a championship and what we’ve been through the last three years,” a tearful Curry told ESPN’s Lisa Salters in an interview immediately after the game. “Beginning of the season, no one thought we’d be here except everybody on this court right now. It’s amazing. It’s very surreal, though, very surreal.”

On Thursday, he hit three 3-pointers in the third quarter, including one with 6:15 left in the third that pushed the Warriors up by 22 when he celebrated by pointing to his ring finger as Boston called for timeout.

But Curry’s signature Finals MVP game came when he swung the momentum of the Finals with his sensational 43-point and 10-rebound effort in a Game 4 win in Boston to even the series at 2-2. Golden State won three straight to return to win its fourth title in eight years.

For Curry, Game 6 was a legacy game for the point guard. The NBA’s most prolific 3-point shooter now has four rings, two league MVPs, two scoring titles, one Finals MVP and an All-Star Game MVP. That puts Curry in a legendary club that includes only Michael Jordan, LeBron James, Wilt Chamberlain, Kobe Bryant, Kevin Durant and Shaquille O’Neal as those who have won an MVP, Finals MVP, All-Star Game MVP and a scoring title according to research by ESPN Stats and Information.

Now debaters can argue where Curry’s place is among the legends in the game and if he is be a top-10 player of all-time and one of the greatest point guards ever.

“It helps,” Hall of Fame point guard Isiah Thomas told ESPN about a Finals MVP being vital for Curry’s legacy. “As [Boston’s] Cedric Maxwell said to me the other night, he goes, ‘There’s [32 NBA Finals [MVP’s]. I’m one of them.’

“I’m one of them, too. At the end, it does matter. It helps. Steph’s legacy is already cemented, in terms of what he’s done for the game, how he’s improved the game, and what he’s done making all the kids want to play the game [the way he does]. He’s pushed the game forward.”

It’s been a record-breaking season for Curry. He became the game’s 3-point king and moved past Ray Allen atop the all-time 3-pointers made list earlier this season.

But this season will be remembered for Curry lifting the Warriors back to the NBA championship after a two-year hiatus due to injuries to Klay Thompson and himself. He hit five or more 3-pointers in 11 different games this postseason.

And he let opponents hear it from him too this championship run. In the second round, he cited Memphis’ mantra of “Whoop that trick” to ESPN’s Kendra Andrews when asked what the Warriors’ game plan was before Game 5.

After Memphis blew out Golden State in Game 5, Curry had 29 points, seven rebounds and five assists to eliminate the Grizzlies in Game 6. He pulled out his rock-a-bye baby celebration gesture a couple of times when putting teams away, like he did against Boston on Thursday. And he wore an “Ayesha Curry Can Cook” shirt after Game 5 in response to a Boston establishment putting a sign in front saying his wife can’t cook.

Now Curry finally put together the recipe for a Finals MVP. In Golden State’s previous three championships, Durant took home the Finals MVP twice in 2017 and 2018 and Andre Iguodala was named MVP in the 2015 Finals.

Curry entered Thursday night with the third-most career playoff points before his first Finals MVP, trailing only Bryant (4,381) and Chamberlain (3,430) according to ESPN Stats and Information research.

Thomas was asked if Curry is a top-10 player of all-time with a fourth championship.

“It all depends on the criteria of measurements that you’re using,” Thomas said. “Is he top 10? You can probably say yes. Then, you can make the argument that there’s some other people who should be in the top 10, top 15. I really don’t know. What I do know, and I do want people to realize is, the Chamberlain’s, the Russell’s, the Kareem’s, the Shaq’s, that’s four right there.

“Then, when you get to Jordan, LeBron, these are different kind of guys. If he gets to the top 10, God bless him. If he doesn’t, wherever he is at, he’s been great.”

Thomas said he will think of three players when he looks back on the last decade-plus.

“This is an era of play that will be defined by LeBron James, Steph Curry, Kevin Durant,” Thomas said. “Those are the three guys, when I look at these last 15 years.”