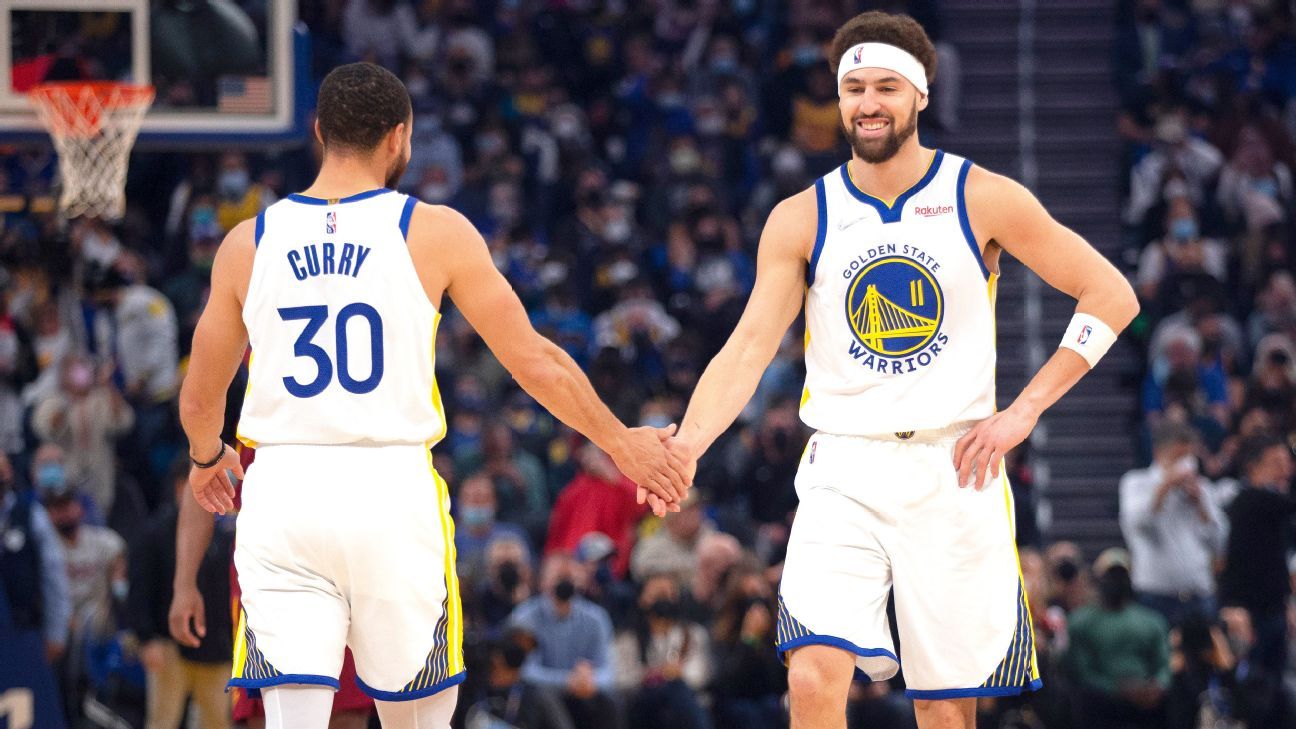 SAN FRANCISCO — As his name was introduced last in the Golden State Warriors‘ starting lineup, Klay Thompson sat in his seat, stared ahead and soaked everything in.

This moment, including one of Chase Center’s loudest roars ever, was 941 days in the making.

After a nearly 31-month layoff that stretched both his physical and mental limits, the beloved Warriors star guard made his long-awaited return to the floor from separate ACL and Achilles injuries and scored 17 points in 20 minutes in a 96-82 win over the Cleveland Cavaliers.

The entire night was a Bay Area celebration of Thompson, who was feted with a hero’s welcome.

“I am not going to say equivalent to winning a championship,” Thompson added of what this night felt like. “But man, it was pretty freaking close.”

In his first game since Game 6 of the 2019 NBA Finals, Thompson missed short off the rim some early shots that he normally makes. But he found his range when he got hot and hit three straight shots in a brief spurt in which he scored seven of his points in the third quarter.

After missing 177 straight games, the shooter wasn’t shy with the trigger, getting up 18 shots in 20 minutes.

“That is so Klay Thompson,” Stephen Curry deadpanned.

Thompson made seven shots, including going 3-for-8 from behind the arc. He also reached two milestones — 12,000 career points and 1,800 3-pointers.

But the highlight of the night was “a vicious” driving dunk, as Curry described it. Thompson drove past Cavs center Jarrett Allen before taking out two-plus years of frustration with a one-handed dunk on both Lauri Markkanen and Dylan Windler with 2:56 left in the second quarter.

With that poster dunk, Thompson showed that he still has some of his explosiveness after tearing his left ACL in the NBA Finals against the Toronto Raptors on June 13, 2019, and then tearing his right Achilles in November 2020.

“I’m going to remember that dunk,” Golden State center Kevon Looney said. “The whole time here when Klay had perfect knees and Achilles, I don’t remember him dunking like that.”

Thompson needed only 40 seconds to score his first basket, a driving runner in traffic.

“After that went in, I thought it might be one of those nights where I might be unconscious,” Thompson said.

While Thompson’s physical ability was there, his shot needed some time to warm up. Overflowing with adrenaline and feeling jitters, Thompson missed his first three 3-point attempts before burying his first triple of the season with 1:18 remaining in the half to the delight of a crowd that was ready to explode any time Thompson did anything.

He opened the second half by making two midrange shots and a 3. After the Cavs took a timeout with 9:08 to go in the third, a fired-up Thompson ran over to a corner and mouthed a few words to the fans.

“I will never forget the reception that Warriors fans gave us, especially myself. Gosh it was fun and it was worth every single day of being away and in that squat rack or on that shuttle board and all the conditioning days. It was worth every single moment. … I am not going to say equivalent to winning a championship. But man, it was pretty freaking close.”

“To know that I can still do that [dunk] and being able to just get to my spots and rise up and shoot?” Thompson said. “It’s only up from here.”

Everything about this day felt out of the ordinary. Warriors players wore different Thompson jerseys during pregame. Over an hour before tip, Thompson sprinted out of the tunnel from the Warriors’ locker room and onto the floor to a huge applause from the fans who were already in the building watching Curry go through his warm-up routine.

Thompson waved the cheering fans on and clapped along with them. Like a boxer who just entered the ring, Thompson walked in a couple of circles as the fans kept cheering. Then Thompson cracked a smile before beginning his shooting routine, knocking down his first six shots, each one to a thunderous cheer.

“I got to feel that energy when he got out there,” Curry said. “The first four shots he made, I had to catch myself. It felt like the game. Everybody was going nuts.”

That was just the appetizer. When the starting lineup was announced, the Warriors saved one of the most popular players in franchise history for last.

And no Warrior wanted to miss the moment. Draymond Green was looking forward to this for weeks, so much so that despite being a late scratch due to tightness he experienced in his left calf in warm-ups, Green still started the game and stopped play seconds after tipoff with a foul just to honor Thompson’s return.

When Thompson went back to the bench for the final time, the fans in the building weren’t ready for it. He hit a 3-pointer not long before exiting the game to a standing ovation with 2:41 remaining. A loud “We want Klay!” chant broke out after that.

In the locker room, Curry’s son, Canon, flicked the game ball to Thompson.

Afterward, Thompson found himself looking at the stat sheet a couple of times during his media session. It was as if he had to make sure this was all real and had happened.

“I’m just so happy right now,” Thompson said. “I did not shoot as well as I wanted to, but I am just so happy that I can even look at the stat sheet and see my name there and all the stats again.”

“That was awesome. I love our Warriors fans. I know they were hurting for me the last two years. That was special. I knew it was going to be electric tonight. I tried to visualize this moment for years really. Gosh it was worth every second. … I am very thankful for that ovation and the love that they showered me. I will never forget that.”