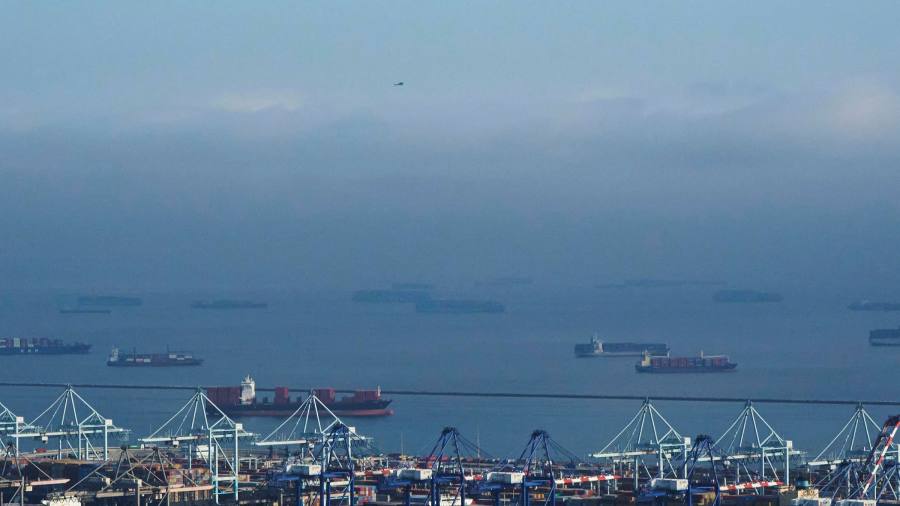 This article is an on-site version of our Trade Secrets newsletter. Sign up here to get the newsletter sent straight to your inbox every Monday to Thursday

Hello from Germany, where supply chain snags have been hampering growth. The main reason being the impact that the semiconductor shortage is having on the country’s carmakers.

The closely watched purchasing managers’ index for manufacturing is now at its lowest level for 10 months. Input costs are also rising fast on the back of supply delays and energy shortages, as well as higher energy and wage bills.

Today’s main piece focuses on a more upbeat theme for manufacturers in Germany and elsewhere. The surge in global shipping costs may have reached its peak, with prices falling sharply since early October.

We want to hear from you. Send any thoughts to trade.secrets@ft.com or email me at claire.jones@ft.com

Are shipping costs about to stay lower for good?

Back in early October, something popped up in our inbox which struck us as potentially big news.

It was based on some data from a freight-forwarding company called Shifl, which showed container shipping rates from China to Los Angeles dropped by $9,000, or a whopping 51.4 per cent, between September and October. (For those interested, we marked this at the time with a short post on FT Alphaville.)

Unless you’ve been sleeping under a rock for the past 18 months, you’ll be aware that the cost of shipping has surged dramatically. On the China to Los Angeles route, quotes of $20,000 to take a 40ft container across the Pacific were not out of the ordinary during the late summer period. That compares with rates as low as $1,500 pre-pandemic.

The fall recorded by Shifl in early October struck us as remarkable, but we were not sure then whether it marked the end of the trend of ultra-high shipping costs. We thought it may have been a blip, something that owed more to power outages and Covid-19 outbreaks in Chinese factories than anything more long term.

Six weeks ago, there was also not much evidence from other shipping cost indices that prices had plunged, or were about to.

That’s no longer the case. Indices of short-term rates compiled by logistics data company Xeneta are also displaying a fall in prices across leading trade routes. Albeit not as dramatically as those recorded by Shifl.

The Freightos Baltic index, which charts global container rates, is also ticking down.

These falls in prices go beyond container shipping too. The Baltic Dry index, which measures the cost of transporting bulk cargo such as iron ore or grains, has also fallen sharply since early October.

So are we about to see prices dip towards the sort of levels seen before the pandemic? That largely depends on what happens over the next fortnight.

Much of the decline in the Baltic Dry index was down to more capacity on the largest vessels, known as Capesize ships. There were also fewer cargoes going to China, and less congestion through the Chinese ports. But Semi Assimakopoulou, an analyst at The Signal Group, which uses mapping data to assess shipping price movements, told us some of these trends might be about to go into reverse. There are signs that vessel supply is now becoming more constrained on the Capesize ships. And demand remains significantly higher than it was at this time last year.

“Typically around the end of November and the beginning of December, there is a spike in demand. And we’ve seen a drop in supply, so I am confident that the price of transporting dry bulk cargoes will go up,” Assimakopoulou told us. “There is potential for them to go up to where they were in October given the time of year we’re now in. And shipping is a very volatile business. We will most probably see this happening before the 10th of December.”

We await with bated breath to see what will happen to container shipping prices. The latest data from Shifl, sent to us earlier today, shows that the cost of sending a 40ft container from China to LA actually ticked up slightly over recent weeks, from a nadir of $8,300 to $10,000.

There has been, and there remains, a great deal of uncertainty in the global economy. Few expected shipping costs to surge as high as they have. Indeed, avid readers may recall our forecast, made back in January, that prices were unlikely to surge much higher than they had done over the course of the latter months of 2020. All we can do is hold our hands to our reddened cheeks and say: “Oops!”

That call has taught us to avoid being too brave, or foolhardy, in predicting what comes next. If you, dear reader, are braver, then we’d very much welcome your thoughts.

Helen Thomas has a great column explaining why, as far as the City of London is concerned, Brexit is a slow bleed.

France and Italy are cementing their friendship with a treaty. How nice.

This morning’s lead story on the excellent Europe Express is about the EU’s attempt to save its vaccine certificate, a project that’s been mired by member states going their own way. Claire Jones

Scoreboard — Key news and analysis behind the business decisions in sport. Sign up here