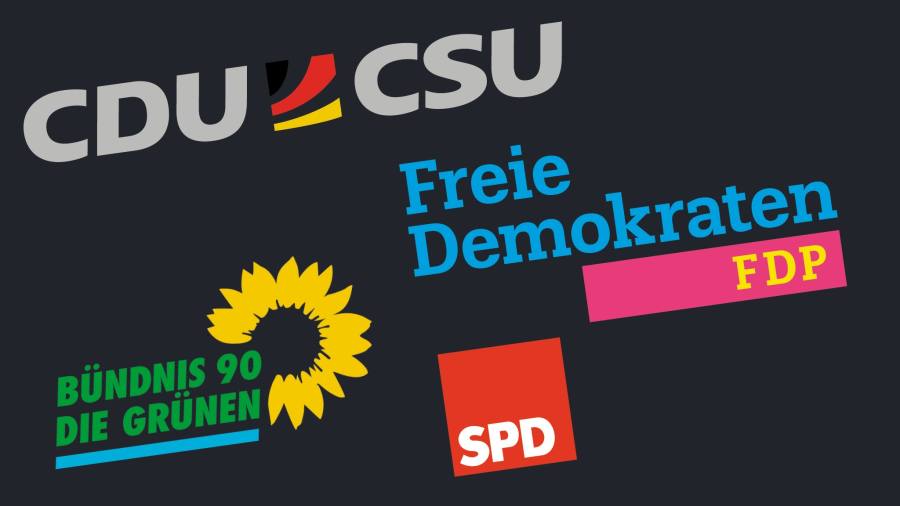 Sign up to myFT Daily Digest to be the first to know about Green Party Germany news.

Germany is entering a phase of intense coalition talks after national elections that will determine Angela Merkel’s successor as chancellor produced a tight result.

The SPD and the CDU could each achieve a majority of seats in parliament if they secure the support of both the Free Democrats (FDP) — a liberal party with a strong free-market ethos — and the Greens, with their emphasis on battling climate change.

But it will not be easy to bridge differences. The SPD and Greens, for example, want to raise the minimum wage and introduce a wealth tax — two proposals the CDU/CSU and FDP reject. Here are the leading parties’ pledges on the key issues.

Nothing divides the parties as much as this issue. Those on the left want to raise taxes, boost investment and relax Germany’s strict fiscal rules, whereas those on the right rule out tax increases and swear allegiance to the “debt brake”, Germany’s constitutional limit on new borrowing.

Foreign policy is another main point of contention. On China, the CDU/CSU cleaves to Merkel’s even-handed policy, seeing Beijing as both a rival and a potential partner. The Greens are much tougher, saying they want to hold China to account for human rights abuses in Hong Kong and Xinjiang.

In climate policy, the Greens have the most ambitious goals, while the CDU/CSU and SPD want to ensure that Germany achieves its climate objectives without losing its status as Europe’s industrial powerhouse.

While Germany’s previous election was fought in the shadow of the refugee crisis, immigration has not featured so prominently in this year’s campaign. Most parties set great store by reform of Europe’s asylum rules while some, like the FDP, stress the need for more deportations of failed asylum-seekers.

Economists predict a looming pensions crisis in Germany, a country with an ageing population and poor demographic outlook. But the main parties have shied away from radical reform of the system.