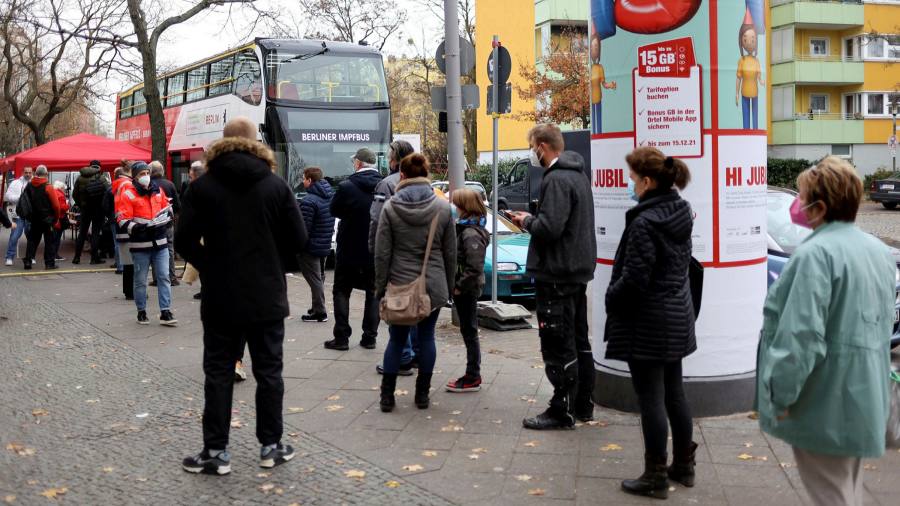 The parties expected to form Germany’s next government have put forward plans to tighten curbs on unvaccinated residents as coronavirus infection rates in the region climb.

The plans from the centre-left Social Democrats, Greens and pro-business Free Democrats include proposals to restrict use of public transport. “This is actually a lockdown for the unvaccinated,” said Dirk Wiese, the deputy head of the SPD parliamentary group.

The SPD, Greens and FDP are negotiating to form Germany’s next government to take over from Chancellor Angela Merkel’s coalition and now have a combined majority in the Bundestag after September’s election.

Like neighbouring Switzerland and Austria, Germany has some of the highest rates of unvaccinated residents in the EU. About 30 per cent of the population have not been inoculated against Covid-19.

Under the parties’ proposal, anyone using buses or trains must provide proof of a negative test, vaccination, or full recovery from Covid. They proposed similar restrictions in the workplace.

It comes after Austria introduced its own stricter measures on the unvaccinated on Monday.

Last week, Germany’s three coalition aspirants introduced a bill in parliament that would end the use of emergency powers to manage the pandemic, and loosen restrictions. It also prevents states from shutting down hotels or businesses in their regions.

But the proposal came under heavy criticism given the country’s sharp rise in Covid infections. The seven-day incidence rate on Monday reached its highest level of more than 300 per 100,000 people. Intensive care units are under increasing pressure and medics say about 90 per cent of those being treated are unvaccinated.

In response, the coalition hopefuls proposed a package of amendments aimed at the unvaccinated, while also offering regional governments options for restricting public events in areas with high infection rates.

FDP head Christian Lindner said the plan would strike a balance by allowing the vaccinated to maintain some normality. “Those who have been vaccinated must continue to have the opportunity for social life — anything else would be disproportionate,” he told broadcaster RTL.

The makers of the Luca app, which has become the main contact tracing platform used in Germany, said that in October 72 per cent of warnings released on its app were from clubs and bars. Data showed that restaurants, cinemas, museums and cafés produced fewer such warnings, they said.

On Monday Germany’s president Frank-Walter Steinmeier asked the unvaccinated to get a jab, saying they were putting their own health and the wider public at risk. “If you are still hesitant about getting vaccinated, I want to ask you directly today: What still has to happen to convince you?” he said.