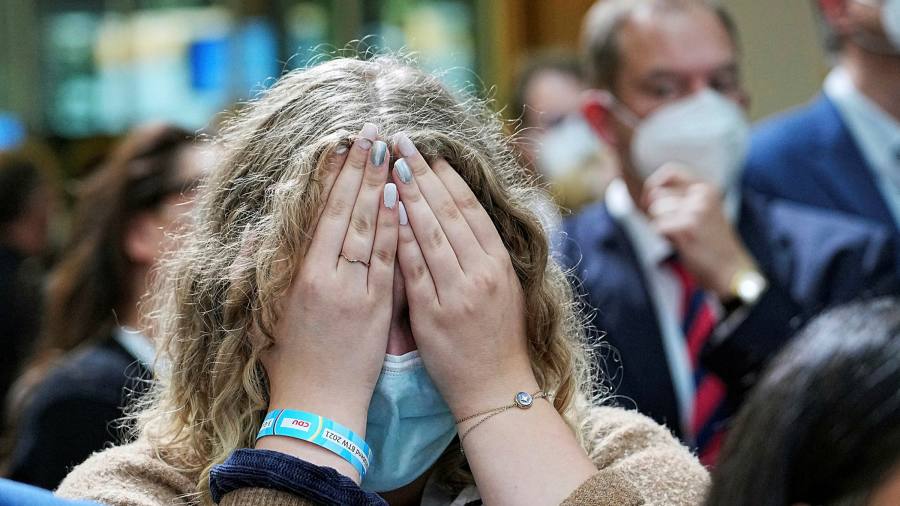 Good morning and welcome to the first day after a German election that has brought little clarity as to who will succeed Angela Merkel.

Early results by the time Europe Express was headed to your inbox were showing a virtual tie between Merkel’s CDU/CSU and the Social Democrats (SPD), with the SPD slightly ahead, while the two junior parties likely to be part of a new coalition — the Greens and the pro-business Free Democrats came in third and fourth, respectively.

The inconclusive election confirms Germany’s political fragmentation — a trend under way in other European countries which can entail months-long coalition talks (the Netherlands is still trying to form a government after elections in March).

In Brussels, officials are bracing for an extended period of uncertainty, meaning policy choices could be pushed back possibly until the new year. It’s far from impossible that Merkel will still be representing Germany at December’s scheduled summit of EU leaders, pending the formation of a new government.

In other news, the European Commission’s landmark case against Google — with a record €4.34bn fine — is being heard in Luxembourg throughout the week. We’ll give you a rundown of the case and why it matters for Margrethe Vestager’s reputation as a tough enforcer of competition law.

On Wednesday, the inaugural Trade and Technology Council is finally taking place after being caught up in the French crossfire over the Aukus defence agreement that stripped Paris of a multibillion-dollar submarine contract. We spoke to the protagonists of this meeting — commission executive vice-presidents Valdis Dombrovskis and Margrethe Vestager — over what’s at stake.

This article is an on-site version of our Europe Express newsletter. Sign up here to get the newsletter sent straight to your inbox every weekday morning

After a bruising defeat in her battle with Apple the EU’s competition chief is facing a court fight over her largest-ever antitrust fine, levelled against Google for allegedly undermining rivals, writes Javier Espinoza in Luxembourg.

Since the start of her career as a competition commissioner in 2014, Margrethe Vestager has built a reputation as a doughty champion of consumers as she seeks to rein in the growing dominance of the world’s largest tech firms.

She has opened investigations on various fronts against Apple, Google, Facebook and Amazon, in what have become some of the highest-profile antitrust investigations. Her office has also become more aggressive at scrutinising acquisitions led by Big Tech to prevent so-called killer acquisitions of small start-ups.

But things have not always gone her way. Last year the EU’s General Court quashed her order for Apple to hand back a record €14.3bn in taxes to the Irish government, bruising her reputation. The case is still going after she appealed and a decision is not likely for years.

In the Apple case Vestager has explained her defeat by pointing to the limitations of EU law when it comes to national tax decisions. But losing the Google case being heard this week would incur far greater reputational damage, as it relates to her core powers — fining companies for abusing their dominance.

During the five-day hearing, Vestager’s team will defend her 2018 decision to fine Google €4.34bn, the largest ever antitrust fine.

The commission took aim at Google’s imposed restrictions on its Android operating system for mobile phones, including illegal “tying” techniques — forcing phonemakers to pre-install the Google search app and its Chrome browser as a requirement for running the Play Store (with access to all the other apps) on those devices.

Vestager has argued that this helped Google entrench its dominant position in mobile search at a time when users were making the shift from desktop computers to mobile devices.

Thomas Vinje, who represents FairSearch, one of the complainants in the case, said that by the mid 2000s, Google had already achieved a dominant position in search — at the time conducted on desktop computers. “Google saw earlier than many how significant mobile would be and how quickly it would rise.”

This week judges will probably seek answers to questions relating to whether Google can tie up apps with the Play Store or Google Search app or whether it should compete with other apps.

Google is disputing the commission’s arguments. “Android has created more choice for everyone, not less, and supports thousands of successful businesses in Europe and around the world,” said a Google spokesperson. “This case isn’t supported by the facts or the law”.

A confidential court document seen by Europe Express also showed that Google is likely to push the argument that its pre-installation requirements are not anti-competitive.

“Given the opportunities they leave open for Google’s rivals, and the options available to users, the pre-installation conditions have a very limited impact on competition,” the report reads.

A decision isn’t expected right away — it will take many months before the General Court gives its verdict. The losing party is then likely to appeal at the bloc’s top court — the European Court of Justice.

This is not the only battle the EU has pending with Google. The General Court will rule on a separate €2.4bn fine against the tech giant on November 10. The hearing in that case took place in Luxembourg in February 2020. A third Google case, for the smallest of the three fines against the company, has been filed but the court hasn’t set a date for the hearing yet.

A timeline of the Android case

Vestager announces the opening of a formal investigation into Android.

Google appeals to the European Union General Court to nullify the decision.

Google announces a choice screen for Android, but the remedy falls short of assuaging concerns over unfair competition.

Hearing before the General Court in Luxembourg

The lead-up to the first Trade and Technology Council meeting between the US and the EU in Pittsburgh on Wednesday has been a messy and fractious spectacle, writes Sam Fleming in Brussels.

What was touted as an early sign of post-Trump re-engagement has been overshadowed by the furious row over Washington’s handling of the Aukus defence deal, prompting an irate France to flirt with torpedoing the inaugural TTC meeting.

Speaking to a group of reporters on Friday, the two senior commissioners helming the EU side of the negotiations — Margrethe Vestager and Valdis Dombrovskis — insisted the Pittsburgh meeting will indeed go ahead on Wednesday, and that the TTC can yield tangible results.

Vestager, who oversees competition and digital policy in the commission, acknowledged with some understatement that the context has been “challenging” (and diplomats say France was still questioning aspects of the TTC at the end of last week).

But she claimed the meeting would be “a really good signal on topics where we have in the European Union all the tools to be a global leader.”

She laid particular emphasis on artificial intelligence, where the draft conclusions set out the ambition for co-ordination on standard-setting on AI and other emerging technologies. The two economies were obviously not going to be harmonising their legislation, she said, but Vestager insisted that in discussions with her US counterparts “I see that they have some of the same concerns”, including the potential for AI to trample over democratic freedoms and values.

Among the other outcomes, according to draft conclusions, include an effort to rebalance semiconductor supply chains; the pursuit of a more co-operative approach to export controls after Donald Trump’s unilateral measures aimed at China wrongfooted EU companies; and exchanges of information on technology platform governance.

The ambitious rhetoric likely to emerge in Pittsburgh will not, however, disguise the profound divisions that will remain between the two sides when it comes to tech policy.

Europe, for example, has resisted pitching the TTC as being explicitly targeted at China, given the divisions between member states over how to respond to the increasingly bitter rivalry between Washington and Beijing. The US is far less coy about its focus on China’s tech ambitions.

While there is talk of co-operation on investment screening in sensitive industries — driven in part by controversial Chinese acquisitions in recent years — the mooted information exchanges appear from the draft to be very high-level, focusing on “investment trends” and best practices.

The two sides say they want to work together on the semiconductor supply chain, yet a billion-dollar public subsidy race is getting under way on both sides of the Atlantic which risks leading to duplication.

Exchanges of information on data governance cannot mask the huge gulf between the EU and US when it comes handling with the big technology platforms — many of them American.

The same goes for the unresolved and deeply vexed topic of transatlantic data flows, given fears that the current way of transferring data continues to expose EU citizens to surveillance by intelligence agencies and governments, mainly in the US.

Chad Bown and Cecilia Malmstrom, of the Peterson Institute for International Economics, insist nevertheless that at its heart the TTC has to be seen as a step forward.

“The Trump administration destroyed institutions and relationships, either deliberately or through neglect,” they write in a note. “Transatlantic ties were not spared. Reconnecting a new generation of high-level US and EU policymakers is thus a necessary first step.”

We will defend our rights and all our costs . . . every cost that we incurred and every cost related to the demobilisation

The Road to Recovery — Our must-read briefing on business and the economy, post-pandemic. Delivered three times a week, it contains expert analysis on the changes to our workplaces — and our lives. Sign up here.

Brexit Briefing — Our essential weekly guide to the world, post-Brexit. Sign up here

Are you enjoying Europe Express? Sign up here to have it delivered straight to your inbox every workday at 7am CET. Do tell us what you think, we love to hear from you: europe.express@ft.com.