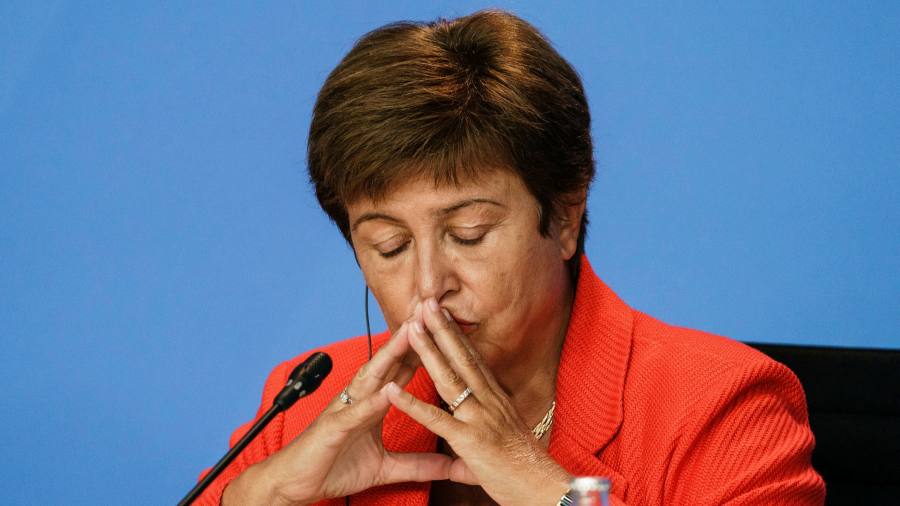 France is planning to grant its backing to Kristalina Georgieva when the IMF’s 24 board members meet on Friday to assess whether they should retain the fund’s managing director following allegations challenging her ethics in her previous job at the World Bank.

But it was unclear on Thursday whether Paris’ support would help sway other European countries to settle a controversy that has hung over the multilateral lender for the past three weeks and threatens to cast a cloud over the IMF and the World Bank’s annual Washington DC gathering starting on Monday.

Several EU countries and the UK were waiting for any indication from the Biden administration over whether Georgieva had lost US support, according to people with knowledge of the discussions at the board.

“The fact that the board took five hours (Wednesday) and didn’t give a clear steer shows you how divided they are on this issue,” said one former senior IMF official. “For matters to do with the managing director, they try to come up with as close to a consensus as possible . . . I am sure they want to put this behind them before next week, but that looks to be very difficult.”

Georgieva said in a statement on Thursday that she looked forward “to an expeditious resolution of the matter in a way that preserves the core strengths of the IMF and the World Bank as strong multilateral institutions that fulfil their important missions during these times of unprecedented crisis.”

Georgieva is accused of manipulating data in China’s favour in the 2018 edition of the World Bank’s widely-followed annual Doing Business report while she was the bank’s CEO, a position she left for the top job at the IMF in October 2019. She has denied wrongdoing and rejected the accusations, a line of defence she reiterated to the board on Wednesday.

The allegation was made in a report commissioned by the board of the World Bank from law firm WilmerHale, which met with the IMF board on Monday.

The bank’s board took the decision to publish the report on September 16, hours after the bank said it would discontinue the Doing Business report because of ethical concerns over the conduct of former board officials and former and serving staff involved in its preparation*.

Aside from Paris, Hungary’s finance minister has also spoken out in Georgieva’s favour this month, saying “the attacks on her have a political background that has no place in international financial institutions”. Last weekend, a public relations agency retained by Georgieva issued a statement of support from finance ministers from 16 African countries.

When asked about the matter at the end of last week, Kristina Wogatzki, Germany’s finance ministry spokeswoman, said: “Consultations are currently under way in the IMF. As you know, Ms Georgieva is the current IMF chief and in this position she has an opportunity to make a statement. Germany will not pre-empt that.”

A key question hanging over EU capitals is where Joe Biden and US Treasury secretary Janet Yellen stand. Washington holds the biggest influence within the IMF given the US’s 16.5 per cent share of voting rights in the fund.

“Until the Americans take a view there are a lot of people sitting on the fence,” said one person familiar with the discussions.

On Wednesday, a spokesperson for the Treasury department declined to say whether the US supported Georgieva’s leadership of the IMF after this week’s board meetings, noting that the Treasury had pushed for a “thorough and fair accounting of all the facts”.

The IMF’s intention is to settle the matter at board level before the fund’s annual meetings next week, a person close to the fund said. But one former IMF official said it might be a difficult ambition to meet.

Georgieva’s departure would create a political headache in Europe, which has always laid claim to the position — while Washington traditionally appoints the head of the World Bank.

The Bulgarian economist succeeded Christine Lagarde two years ago after an acrimonious battle among European capitals. Her appointment required the IMF to scrap the age limit stated in the fund’s bylaws for the position.

But if she stays, the credibility of the fund would be “greatly diminished”, warned Anne Krueger, former first deputy managing director of the IMF.

“The entire institution’s work will be devalued. That prospect alone should be enough for the IMF’s political masters to find a new managing director whose commitment to the integrity of the work is not in question,” she wrote in Project Syndicate on Thursday.

*This story has been amended to clarify that the concerns involved former board officials.