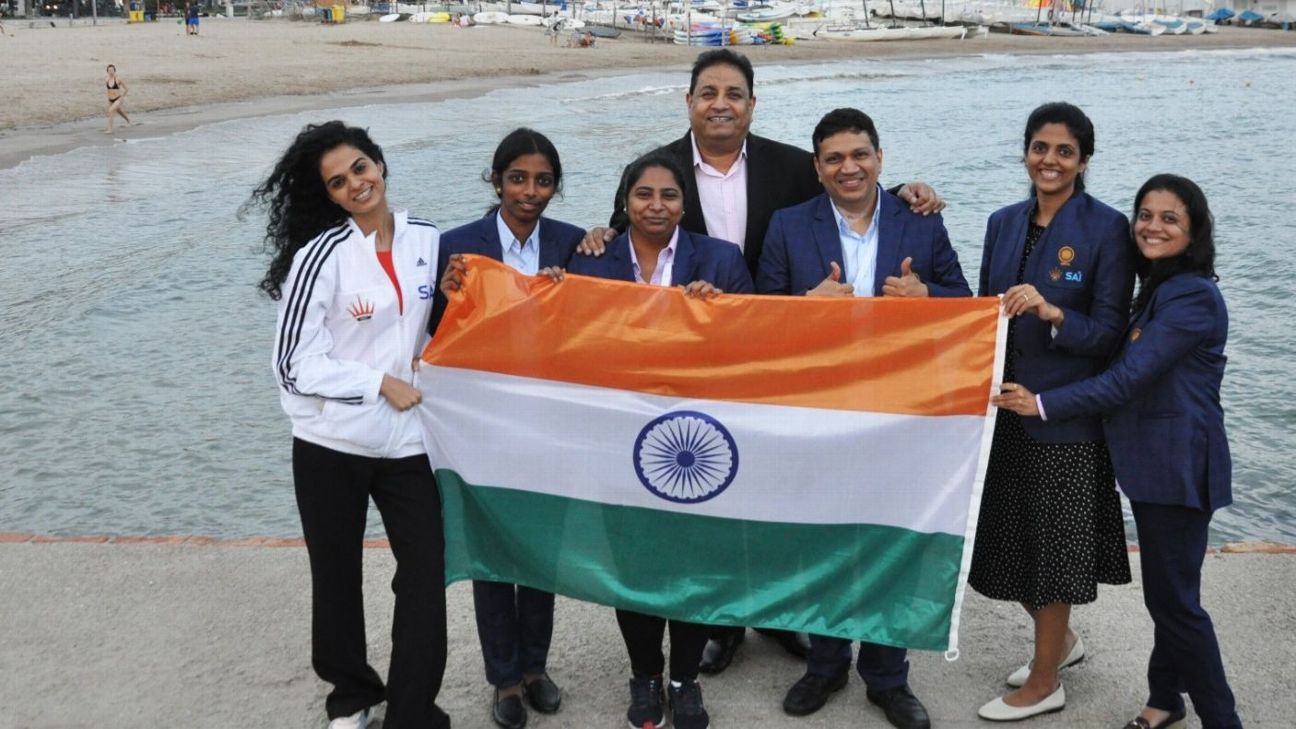 Harika Dronavalli was 13 when she played her debut Olympiad in 2004. The Indian women finished ninth that year. Now 30, she stayed unbeaten through the World Women’s Team Championship in Sitges, Spain last weekend, leading the national side to a historic silver medal. Before this, no Indian chess team – male or female – had won a silver medal at a World Teams event or over-the-board Olympiad.

“I’ve just been lying on my bed for the past few days…not responding to texts or checking social media. I’m still exhausted from the finals, emotional and in disbelief. This has taken me 17 years,” Harika tells ESPN.

The incredulity is warranted. She’s seen the near-misses and lived the almost-there episodes. She was part of the 2011 Olympiad team which needed just one point from three games for a medal, only to lose all three games.

“Sometimes,” she says, “things fall apart no matter what you do. This time, even though we weren’t the strongest team on paper, it all came together beautifully.”

Four days before they were to leave for Spain, the team got together for a Zoom meeting. Captain Abhijit Kunte had a difficult news to break to the players: The strongest of the five-member unit- Koneru Humpy – was no longer part of the team. Humpy, ranked No. 3 in the world, had to sit out because she’d taken the indigenously developed Covid-19 vaccine, Covaxin which is still awaiting World Health Organisation (WHO) approval. In its absence, she would be treated as unvaccinated and would have to quarantine for 10 days upon arrival. First-choice replacement Padmini Rout was ruled out for the same reason.

“The news came as a bit of a shock,” Harika says. “Humpy not playing literally changes everything, the board order, strategy, everything. She’s the strongest player we have. At that moment you can’t even console yourself with ‘Okay, this is probably for the best’ because your mind is telling you that no good can come from not having your highest rated player on the team. All we told each other and ourselves was that we’ve got to break this goal of a medal into two or three mini goals, starting with making the quarterfinals and just fighting with all we have.”

To optimise a relatively weaker team on paper, Kunte had to tweak plans and think on his feet on draw offers. Two of the five team members – Bhakti Kulkarni and R Vaishali were relatively inexperienced in major team events and it was crucial to swaddle their confidence. After Bhakti lost her first round game against Azerbaijan in a match that India drew 2-2, in the second pool match against Spain, Kunte suggested that she offer a draw.

“Bhakti was an important fourth board player for us and I wanted to keep her belief going since she had lost the previous match. As a team too, we had to get into the stride of winning matches to set the tone. With Bhakti’s draw, we won against Spain without a loss on any of the boards.” Sensing that the 29-year-old was struggling to find her rhythm in the match against Kazakhstan in the next round, Kunte switched plans and decided to rest her. Tania Sachdev, who was fielded in Bhakti’s place, went from a completely winning position to blundering into a loss and the deliverance came through Mary Ann Gomes – who was brought in as replacement for Humpy five days before the team flew to Spain. She won both her games on the day, neutralising the defeats and carrying India into the semifinals. Seasoned player aside, holding a Schengen visa made her a pragmatic choice for the team.

The only tiny problem was that Mary had played her previous over-the-board tournament way back in February 2020. “On the day before my birthday, I got a call asking if I was okay to join the team. It felt like a strange gift then because I had to fly to Spain in five days. I hadn’t played in a while so I was tense. My first major team event was the 2006 Olympiad in Italy, and I can say with certainty that we’ve had better teams before. But there was something about the way we fought this time.”

The 12-team tournament had a new format in place this year. Instead of round-robin, two pools of six teams each of approximately even strength were formed. Four top teams from each pool made the knockout playoffs. India made the finals, going down to Russia 0-2, the only team they lost against in the entire event. Russia was clearly the superior team by a distance with three GM members in its ranks. India had just one – Harika. But rarely in India’s fight through the competition did the weaknesses show.

One of the reasons, Harika points out, was the players’ approach of taking decisions that were made, gamely. “Whether it was being dropped from a game, or being asked to play all games, as long as the team stood a chance no one had any problem. We ate our meals together, went for walks and there was a sort of harmony in the team which really worked well. I guess the pandemic has made us a lot more grateful for opportunities like this one since we’ve had so few over-the-board tournaments. I was burning up with fever the first two days and trying out all possible fever medications. We briefly feared it was Covid and I got myself tested. Thankfully my result returned negative. The adrenalin rush just kept me going from one game to the next. It was when Tania reminded me at the end that I realised I’d played 11 games in seven days.”

Tania, much like Mary, hadn’t played an over-the-board tournament in 15 months. If Mary shone in the quarterfinals, Tania pulled off a stunner in the semifinals against a higher-ranked Georgia. In the second of two rounds in the match, the team’s youngest member R Vaishali won her game, Harika drew and Mary lost. It was then down to Tania’s board and she delivered, taking India into the finals. The team melted into sobs. “I was sitting at the board and flashbacks of what had happened in the previous match were coming to me,” she says. “When it was over, we hugged, cried and couldn’t believe what we’d pulled off. It’s taken so long to get here. We’ve had so many heartbreaks over the years, so the mind doesn’t buy into it when it actually happens.”

All India Chess Federation (AICF) secretary Bharat Singh Chauhan, who travelled with the team, ascribes the medal partly to an attitudinal shift. “With the current generation, the mindset is different. They are not intimidated by the big teams. Most players in the Georgian side were at least 50-100 rating points above ours, yet we beat them. If you look at a team like Russia who won the gold medal, they had four Grandmasters working with four players. We had two GMs helping our team this time but we are looking to get to where Russia is.”

At the base, there are pathways in place to work the numbers, Chauhan explains. Under the recently launched ‘Chess for everyone’ project starting next month, girls and boys (rated below 1600) across 550 districts can be enrolled by their respective state associations for free coaching camps. “We plan to pick 15 girls among them and have a foreign GM train them,” he says. The AICF also runs the ‘Project Smart Girl’ under which 15 states are given INR 50000 for an event with the stipulation that each state needs to ensure participation of at least 50 girls to be eligible for the grant. In addition, there are 14 national tournaments – Under-7 girls to senior women.

While all of this churns growing participation figures, to level up, more women-only elite tournaments and training support is needed. “The chances of women winning prizes are low when playing alongside men so there have to be more women-specific events” Kunte says. “Only when you win in a sport do you start believing that you can play it for a living.” Closer home, International Master Bhakti, who was part of this team, is yet to find a job that will allow her to sustain expenses of pursuing a full-time career in the sport.

Tania looks at the growth needed in women’s chess through the prism of where it stands in relation to the world’s best teams. “I hope one of the things that comes through with this medal is a sustainable programme with training and support structures so that against teams like Russia we aren’t the clear underdogs,” she says. Plans, Chauhan assures, are afoot to have a “round the year training set up” for women’s players with “four of five GMs” working with them. The chess boom during the pandemic and the heightened visibility and following online has helped pump money into the sport. AICF recently entered into a one year deal with a private sponsor for the National Championships for INR 1 crore. The federation is also bidding to host marquee events like the 2022 Women’s Candidates tournament and the 2022-23 Women’s Grand Prix series.

For all the decades of work gone into winning this medal, Kunte feels slighted by the apathy towards the team post the silver. “Honestly, it seems like the medal has already been forgotten. We haven’t had anyone from the government congratulate us yet. The magnitude of what the team has achieved seems to be lost on most outside the chess community.”

Harika looks at the medal as a starting point. A teenager in her first Olympiad, she played out nine draws in as many games because she was “too scared to lose”. Since she was always tall for her age as a kid, she never got toys on flights. But within the team, Harika was the baby and pampered by the rest. “I remember falling sick during the games that year (2004) and the coach gifted me a toy baby penguin. I was overjoyed.” This time, 17 years since, in the absence of Humpy, she was the strongest, most experienced player in the side. Often during the games she would get up from her chair, survey her teammates’ boards to see how they were faring before settling back in, much like the nervous tic of an anxious coach. Her arc from prodigy 17 years ago to mentor too has found completion.

In a sport where players are largely on their own travelling from one tournament to the next, competing as a team from the country in matching blazers, Harika says, is an emotional experience. “When I saw other countries on the podium and we returned empty-handed, I cried every time. You could say I came into this year’s event with a lot of past baggage. While a part of me was positive, the other half was ready for another failure. But this year turned out to be the year the Indian women went from participating team to silver medallists.”

“When future generations look back, this medal will be seen as a beginning.”