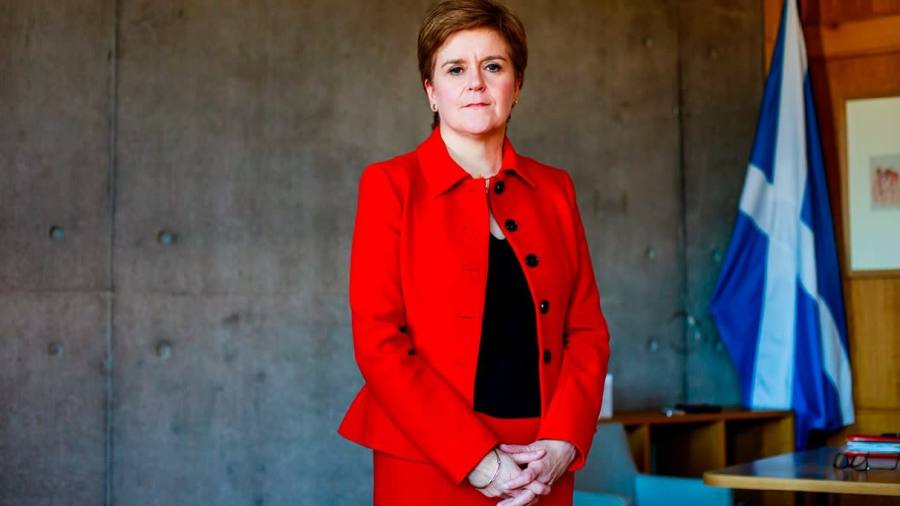 Nicola Sturgeon has warned that it would be “unthinkable” for the UK to indefinitely deny Scots another say on their constitutional future and that the longer London seeks to delay a second referendum, the more likely independence will become.

In an interview with the Financial Times, Scotland’s first minister pointed to strong support for independence among younger Scots as showing time was on her side.

“I’ve got democracy on my side . . . if they think it’s about playing a waiting game, I’ve probably got time on my side as well. You look at the demographics of the support for independence — well, I’m not sure that’s going to get you out of this conundrum.”

Boris Johnson, Britain’s prime minister, has said he will refuse to approve another independence referendum, setting the stage for a potential court battle over whether Edinburgh can legally hold one on its own.

Sturgeon sought to portray staying in a post-Brexit UK as riskier than independence, despite Scotland’s much worse fiscal position compared to when a referendum was held in 2014. The greatest threat to the Scottish economy was a shortage of people, exacerbated by the scrapping of freedom of movement for EU citizens, she said.

Thanks for reading FirstFT Europe/Africa. — Jennifer

3. Nato expels 8 Russians for spying Nato has expelled eight “undeclared intelligence officers” from the Russian delegation to the military alliance, and halved the total size of Moscow’s representation, in a move that will further deteriorate relations between western militaries and the Kremlin.

4. JAB seeks to raise $5bn fund to invest in petcare The European investment group behind brands such as Pret A Manger, Panera Bread and Krispy Kreme is seeking to raise a $5bn fund to extend its spree of dealmaking in the booming petcare sector.

5. Mitch McConnell offers compromise to stave off US debt ceiling crisis The Senate’s top Republican has offered Democrats two pathways to avoid a debt limit crisis, a rare olive branch in a long-running stand-off that has spooked investors and corporate America.

Nobel Prize in literature Sweden is expected to announce the winner today, followed by prizes for peace tomorrow and economics on Monday.

BoC governor speech Tiff Macklem, governor of the Bank of Canada, will speak before the Council on Foreign Relations. The European Central Bank will also release the minutes of its monetary policy meeting in September.

Economic data Economists predict an additional “weak reading” on Germany’s industrial production figures for August, after the Federal Statistical Agency said real sales in manufacturing were down 5.9 per cent from the last month. There are indications that temporary factors inflated US jobless claims, which rose for three weeks in September. (FT, WSJ)

How Larry Fink became king of Wall St The chief executive built BlackRock into the biggest money manager the planet has ever seen, investing money for everyone from pensioners to wealthy oligarchs and sovereign wealth funds. But should one company wield so much power?

Afghan businesses readjust to Taliban rule After their capture of Kabul, the Islamists have promised an end to the corruption and interference many businesses complained about. But those pledges will amount to nothing if the Taliban are unable to stop the collapse in economic activity.

The economic threats from China’s real estate bubble China’s population is ageing and 60 per cent of its people are already urbanised — clear signals that the property boom must end, writes Martin Wolf.

From Panama to Pandora The exposé on the financial affairs of the rich and powerful, dubbed the Pandora Papers, highlights the progress that has been made since the world began to clamp down on offshore tax evasion in 2008. Global tax correspondent Emma Agyemang explains why.

We need to talk about Squid Game The hit Korean series is on track to be Netflix’s most popular show but it exposes hard truths about human behaviour, writes Fani Papageorgiou.

Thank you to everyone who took part in our poll. Sixty-three per cent said they would buy an electric vehicle.

Greenland, the Baffin Base Camp and Georgia are the most adventurous destinations ski enthusiasts are heading to this winter. Oh, and there’s Uzbekistan. Could this Central Asian country be skiing’s next big thing?