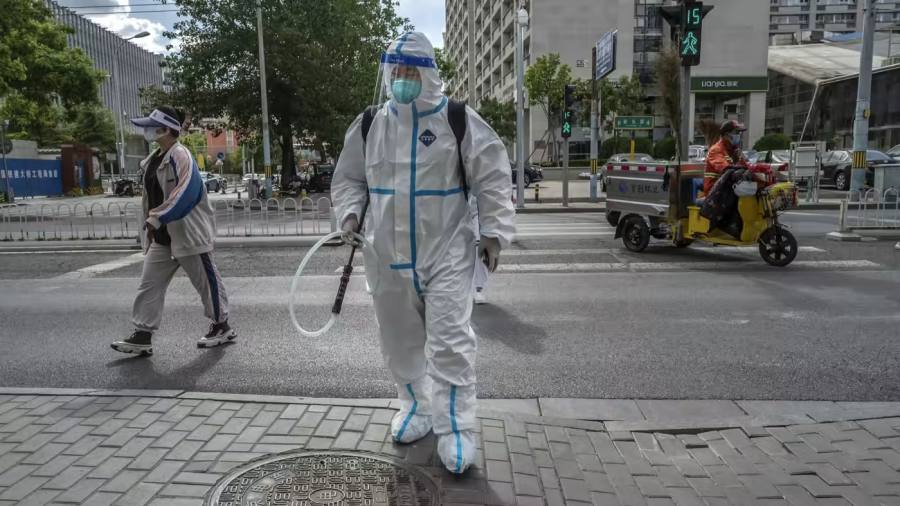 There are further signs of a slowdown in the global economy today as the impact of Covid hurts economic activity in China, the war in Ukraine hits Europe’s economy and the Federal Reserve’s efforts to control rampant inflation threaten a recession.

In China, the country’s main gauge of consumer activity, retail sales, slumped 11.1 per cent year on year, compared with forecasts of a 6.6 per cent fall from economists polled by Bloomberg. Industrial production, which underpinned China’s rapid economic recovery from the initial Covid shock in early 2020, dropped 2.9 per cent.

The data are the most striking sign yet of the rising economic toll from China’s zero-Covid strategy. Dozens of cities and hundreds of millions of people across China have been placed under full or partial lockdowns as part of a policy that is expected to have deep ramifications for global supply chains.

Meanwhile, in Europe the EU cut its growth forecasts and lifted its inflation outlook as the energy crisis triggered by Russia’s invasion of Ukraine exacts its toll on the EU economy.

Both the EU and euro area are forecast to expand by just 2.7 per cent this year — well shy of the previous expectation of 4 per cent, forecasts published by the European Commission today showed.

Inflation is expected to surge above 6 per cent in both the EU and euro area this year, with some central and eastern European countries likely to see double-digit price rises in 2022.

Last week, European Central Bank president Christine Lagarde signalled that she would support raising the main interest rate in July, paving the way for the first increase in the eurozone for more than a decade.

In the US, where annual inflation is running at the highest level for four decades, there is a “very, very high risk” of a recession, according to former Goldman Sachs chief executive Lloyd Blankfein.

Blankfein, who stepped down as Goldman chief in October 2018 but remains the Wall Street bank’s senior chair, said in an interview with CBS yesterday that corporate America and US consumers should be prepared for a recession as the Federal Reserve tightens policy to combat high inflation.

Do you think the US is heading for recession? Email your thoughts to firstft@ft.com. Here’s the rest of the day’s news — Gordon

1. Police say racist extremism was motive for Buffalo shooting Police said they were treating the shooting which left 10 people dead in Buffalo over the weekend as “racially motivated violent extremism” and a hate crime. The suspected gunman, 18-year-old Payton Gendron, was “a lone gunman, armed with weapons of war and a hate-filled soul”, President Joe Biden said yesterday. Meanwhile, police arrested a 60-year-old suspected of shooting one person dead and injuring five others at a meeting of Asian church goers in southern California. (NBC)

2. Ukrainian counter-offensive reaches Russian border Ukraine is claiming today that a counterattack has pushed Russia’s invading forces back from the eastern city of Kharkiv to the Russian border. Ukrainian forces have been battling Russian forces for weeks in fierce fighting around the country’s second-largest city. The claim could not be independently verified. Meanwhile, McDonald’s is to sell its business in Russia.

3. Goldman Sachs’ senior staff given as much time off as they want Under a new “flexible vacation” scheme introduced from May 1, partners and managing directors will be free to “take time off when needed without a fixed vacation day entitlement”, the Wall Street bank told staff in a memo last month. Junior bankers have been given a minimum of two extra days of holiday per year.

4. Pimco’s Dan Ivascyn says bonds becoming a bargain Investors should “get ready” to snap up bargain bonds following a bruising sell-off in debt markets last week, according to the chief investment officer of credit trading house Pimco, which manages $2tn in assets.

5. Bitcoin has no future as payments network, says FTX chief Bitcoin’s inefficiency and environmental toll prevent the cryptocurrency from being an effective means of payment, according to Sam Bankman-Fried, the billionaire founder of digital asset exchange FTX, who said the system of validating blockchain transactions could not be scaled up.

Outlook for markets Weak Chinese economic data is expected to weigh on US equity markets when they open this morning. Futures contracts that wager on the direction of Wall Street’s S&P 500 fell 0.9 per cent and those on the technology-heavy Nasdaq 100 dropped 1.2 per cent, indicating another down day following the sixth consecutive week of declines.

Hedge funds Large institutional investment managers are set to disclose their equity holdings in their quarterly 13F filings. Market watchers will be watching for funds changing their positions in high-profile stocks of recent weeks and months, mostly in the technology sector.

Monetary policy John Williams, president of the Federal Reserve Bank of New York, will take part in a discussion about the economic outlook at the Mortgage Bankers’ Association’s Secondary & Capital Markets conference in New York.

Economic data Manufacturing activity in New York state is expected to have softened, with the New York Fed’s manufacturing index forecast to drop to 17 in May from 24.6 in April, according to a Refinitiv survey of economists. Manufacturing sales and wholesale trade figures, both for March, and housing starts for April are set to be released this morning.

Northern Ireland Boris Johnson will visit Belfast to try to persuade Democratic Unionists to rejoin the power-sharing executive in Stormont, but the UK prime minister will face opposition over his plans to unilaterally scrap parts of the post-Brexit treaty.

Correction: In Friday’s quiz one of the questions did not match the answer. We apologise for an error.

Let the Fed put money where it is really needed The Federal Reserve was designed just over 100 years ago for one discrete task — to ensure that the country has enough money to keep the economy growing to its full potential. But over that time it has come to backstop the global market system, Rana Foroohar argues. As a result, she says, the Fed is trying to walk an impossible line.

Is Elon Musk too big to regulate? Many on Wall Street saw Elon Musk’s tweet on Friday announcing he was putting his purchase of Twitter “temporarily on hold” as a way of softening up Twitter’s management to negotiate a lower offer. But legal experts said it was another example of the Tesla chief executive flouting securities regulation, leaving him open to the SEC’s nuclear option.

Crimea could be Putin’s tipping point in a game of nuclear chicken The US thinks Vladimir Putin would authorise the use of nuclear weapons only if he perceived an existential threat to Russia. But what would qualify as such a threat, asks Malcolm Chalmers of the Royal United Services Institute.

Inflation returns to haunt Brazilians Inflation in Brazil is nowhere near as bad as it was in the 1980s and 1990s, when supermarkets would remark prices twice a day to keep pace with the rising prices but at 12 per cent, it is now at an almost two-decade high. And the spectre of Brazilian hyperinflation was never entirely banished.

Bonuses are outdated in the age of knowledge work The idea of paying for performance is deeply ingrained. But what if the concept is flawed? Two studies suggest it is, Pilita Clark writes, given that work is more complex and collaborative than ever. Offering bonuses can even backfire.

After the scourge of the pandemic, the first Summer for the City festival is offering New Yorkers a summer to “rejoice, reclaim and remember” with an outdoor dance floor and free installations. Here are a selection of other classical concerts taking place across the US this summer.

Thank you for reading and remember you can add FirstFT to myFT. You can also elect to receive a FirstFT push notification every morning on the app. Send your recommendations and feedback to firstft@ft.com. Sign up here.