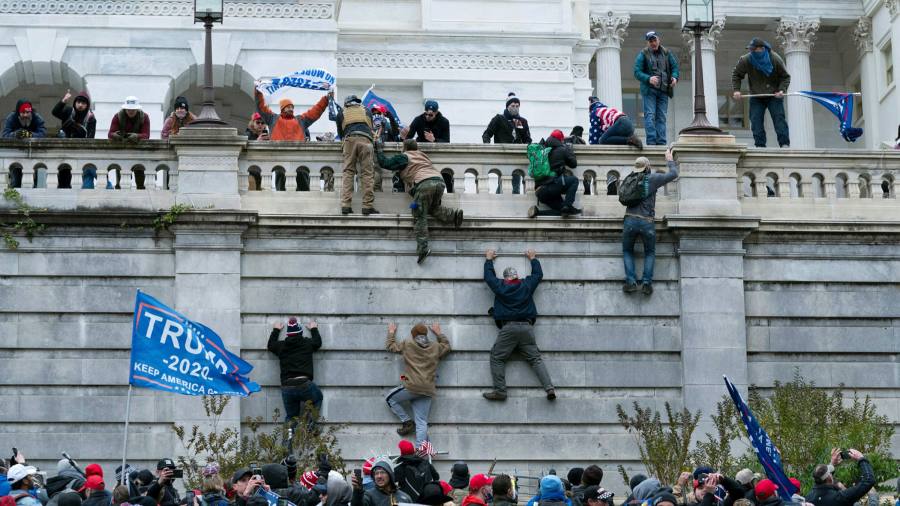 Joe Biden placed the blame for the January 6 attack squarely on Donald Trump at an event at the US Capitol to commemorate the first anniversary of the siege.

In an emotionally charged address, Biden, who referred to Trump only as “the former president”, said his predecessor “values power over principle because he sees his own interest as more important than his country’s interest and America’s interest.

“His bruised ego matters more to him than our democracy or our Constitution,” the US president said. Dismissing Trump’s claims that the 2020 election was “stolen”, Biden called on Americans to think seriously about the state of the country’s democracy.

Former president Jimmy Carter wrote in the New York Times that he fears for the future of American democracy.

Corporate America’s response to the January 6 attack was also in focus as one of Washington’s top business groups condemned those perpetuating “the falsehood of an illegitimate 2020 presidential election”. (FT, NYT)

Thank you for reading FirstFT Asia. Tell us what you think of today’s newsletter at firstft@ft.com — Emily

1. The latest from the Kazakhstan protests Russian paratroopers and units of allied regional armies have arrived in Kazakhstan after an appeal for help in controlling protests that have led to dozens being killed in clashes with police. Meanwhile, Chevron has made a “temporary adjustment” to oil output in Kazakhstan — the first sign that the upheaval is affecting energy supplies from the Opec+ member.

2. Fed trading scandal rekindled by disclosure from top official New disclosures reveal that Federal Reserve vice-chair Richard Clarida was more active in financial markets than he originally divulged. Clarida, who is already under fire for making trades as the Fed was plotting emergency support for the economy, blamed “inadvertent errors”.

3. Japan and Australia sign pact in face of more assertive China The two nations signed a landmark defence agreement yesterday to accelerate military co-operation between the two countries and respond to China’s growing assertiveness in the Indo-Pacific.

5. Cathie Wood’s flagship Ark fund suffers fresh blow Ark Invest’s flagship fund has dropped 9 per cent so far this year, following a sharp fall in 2021, as a strong shift by investors out of the unprofitable technology stocks that powered its extraordinary rise dealt it a fresh blow.

Hong Kong tightens Covid-19 rules Most public activities will be banned in the territory from today, for at least the next two weeks as Hong Kong prepares for the spread of the Omicron variant. Here’s what will be closed. (NBC)

US jobs report The official non-farm payrolls report is expected to show the US economy created 400,000 jobs in December, while the unemployment rate is projected to slip to 4.1 per cent, from 4.2 per cent previously.

What else we’re reading and listening to

China economy: the fallout from the Evergrande crisis The crackdown on real estate ordered by President Xi Jinping is putting pressure on local governments and companies, with China’s second-largest developer on the cusp of becoming the country’s biggest bankruptcy case.

Sudan’s painful struggle for democracy Sudan’s latest attempt to secure its transition to democratic rule foundered this week with the resignation of Abdalla Hamdok, interim prime minister. On the latest episode of the Rachman Review, Gideon Rachman discusses what happens next with London-based journalist Yousra Elbagir and Muzan Alneel, a writer based in Sudan.

Football’s future is in the metaverse When European football was having conniptions last year over plans for a breakaway Super League, a key theme in the row was the concept of the “real fan”. Technology is about to give this debate an intriguing new dimension, writes Leo Lewis. Are you interested in participating in the metaverse? Tell us in our latest poll.

What delivering a dog to Denver tells us about work Digitisation and the pandemic have turned many of us into the cyber equivalent of hunter-gatherers, scavenging for income and services in novel ways, writes Gillian Tett.

Why modern managers are reviving old-school staff handbooks In a white-collar world that is increasingly likely to include a component of homeworking — or may be wholly remote — employers are building virtual company handbooks, rewriting the rules of the workplace to respond to changing working styles and cultures.

Running club numbers are on an upward sprint. They offer a sense of on-demand community — a fundamental draw right now as many social touchpoints of daily interaction remain at a low. For some, clubs even offer the chance to expand one’s social horizons.

Thank you for reading and remember you can add FirstFT to myFT. You can also elect to receive a FirstFT push notification every morning on the app. Send your recommendations and feedback to firstft@ft.com

#TechAsia — Your guide to the billions being made and lost in the world of Asia Tech. Sign up here