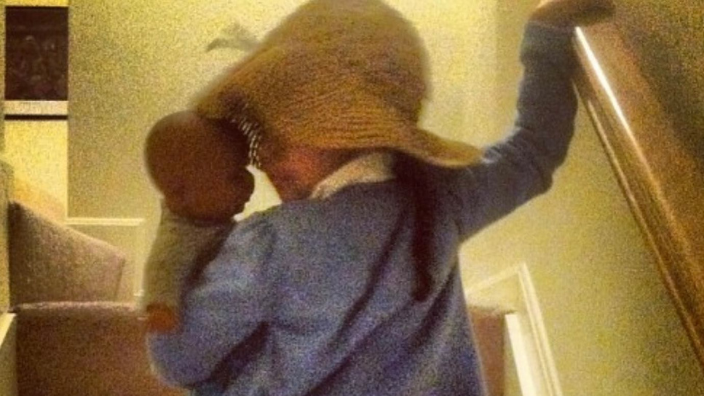 Note: While this Friday column was called Family Fridays for the first two volumes, I think Fatherhood Fridays is probably a bit more apropos and also sounds cooler, so somebody in heaven tell Sam Cooke that a change has, indeed, come.

Yesterday, my first-born child and my only daughter turned 13 years old. It’s interesting how much of an accomplishment that feels like. I even told her that I was proud of her while realizing how odd it is to say “I’m proud of you for your continued living.” I mean, it is true; I’m very proud of the person she is and that she is becoming, but I was just as proud the day before her birthday as I was on her actual birthday. Point is, my oldest child is now officially a teenager; hosannah in the highest.

For the record, I’m not one of those parents dreading the teen years. Perhaps it’s because she’s my daughter (which makes me daddy) and she will likely reserve the majority of the stereotypical foolywang (should that manifest itself) for her mother because that daddy/daughter thing is real. Maybe I’m naive. I’m not sure, but I’m excited to see where this amazing kid starts to take her life (on the way to Spelman College and beyond—manifestation, amirite?)‚ while also hoping it doesn’t happen as quickly as it felt like the past 13 years have flown by. I still remember the day I found out I was going to become a father and now it’s 13 (really 14) years later. Jesus be a slow-motion filter…or some such thing that makes me sound like I have moved past Instagram on the social media ladder. To put a stamp on that last thought; my other kids—my boys—will turn 7, 6 and 2 this year. WHERE DID THE TIME GO?

Birthdays tend to be a catalyst for reflection. I know I tend to spend at least 10 solid minutes every birthday thinking about all the stuff I didn’t do in the prior year. That thought process is usually interrupted by one of my kids telling me what’s inside the box I’m about to open—socks, always socks—and then me smiling and moving on. But that reflection—when not being interrupted by socks—does often remind me of things I’ve learned, and when it comes to my children, I’ve learned a lot. All of my kids have taught me different things about myself; my daughter has had the most opportunity since she’s been around the longest. If the court will allow it, I’d like to share just a few things I’ve learned about myself because of my daughter.

Pre-kid Panama believed he hated musicals (or more accurately, wasn’t too fond of them) because he said many times, “I hate musicals.” But if there’s one struggle I’d assume many parents have is finding appropriate music to listen to in cars with kids as you commute from Point A for My Kid to Point B for My Kid. My daughter took a particular liking to lots of musical theater jams. For instance, we ran Wicked into the ground when she was like 3. As I’ve gotten older, I’ve used tons of musical soundtracks as the music of journeys between home and school and beyond. Hamilton? Nonstop. *rimshot* I even used to play the soundtrack to Pitch Perfect over and over in the car. And perhaps this is cheating but the Frozen soundtrack? We could never quite let it go. I realize Disney soundtracks aren’t quite musicals, but they kind of are too for the purposes of this lesson learned. Also, if you’re a parent—like a few of my neighbors—with little kids who literally ONLY listen to supremely profane music, I’m judging you with my whole heart.

Similar but not entirely the same…

Same thing, those morning car rides to daycare or school needed a soundtrack so I started rocking to the gospel stations, and whew, chile, my whole days were better for it. I still do it now sometimes because the uplifting nature and singers who can actually sang genuinely make for a joyous way to start the morning. Before my daughter, I pretty much only listened to hip-hop, R&B and “Return of the Mack” on repeat all day every day.

That last one still holds, by the way.

3. I’m not nearly as patient as I thought I was.

I feel like this is one of those lessons parents learn: Before you have kids, you probably think you have the patience of a saint. Kids illuminate where you actually land on the patience spectrum, and you’re probably less patient OR more patient than you thought. I’m definitely not as patient as I hoped I was. Now, this doesn’t mean that I’ve spent all those years yelling, silently stewing or anything; au contraire, it’s highlighted for me how much work I have to put into chilling out and letting kids be kids. My daughter taught me this, and now I have three little boys who require me to work harder than I ever have on my patience. I’m a work in progress. I think my daughter got part of my fatherhood journey where I had the MOST patience possible.

4. I care more about her going to Spelman than I thought I would.

The four years I spent at Morehouse College were priceless for me, both in terms of the quality of that time and the education I received. I met some of my best friends and learned some of the most sustaining lessons about life. Thing is, that probably would have been the case for me no matter where I went. I’m sure I’d have been successful, but Morehouse definitely colored the type of success. It also introduced me to Spelman College, the college I revere the most. I have such appreciation and respect for Spelman College and the women that come from there that I genuinely want my daughter—who is a SpelHouse baby, mind you—to gain that same experience. Spelman is already part of her life’s plan so I’m excited about that; I just didn’t realize I cared so much. And she can go wherever she wants; her happiness is paramount. I’d just like to be happy that she was at Spelman, too.

5. I really, really enjoy being a parent and father.

I pride myself on being a good father and being as present for my kids as possible. I actively want them to succeed and win and I realize that requires a lot of intentionality, which, of course, is a constant work in progress. But with my daughter, I learned how much I was willing to try to do things that I was uncomfortable with. Learning how to say I’m sorry and lean into emotions and understand where those emotions come from, which frankly, were all lessons that were as new for me as they were for her. I also discovered emotions I wasn’t familiar with or hadn’t ever truly experienced, which was uncomfortable, but not unwelcome. Either way, I have plenty of work to do as a father and I realize that the next few years with my daughter will teach me more about myself and my own identity as a father than ever. And I’m thankful that the things I’ve learned because of her have helped inform me in my parenting journey with my sons. This parenting thing isn’t for the faint of heart, but it is one of the most enjoyable, tiring experiences out there. And I thank my daughter for showing me what it can be like.

Panama Jackson is a columnist at theGrio. He writes very Black things and drinks very brown liquors, and is pretty fly for a light guy. His biggest accomplishment to date coincides with his Blackest accomplishment to date in that he received a phone call from Oprah Winfrey after she read one of his pieces (biggest) but he didn’t answer the phone because the caller ID said “Unknown” (Blackest).