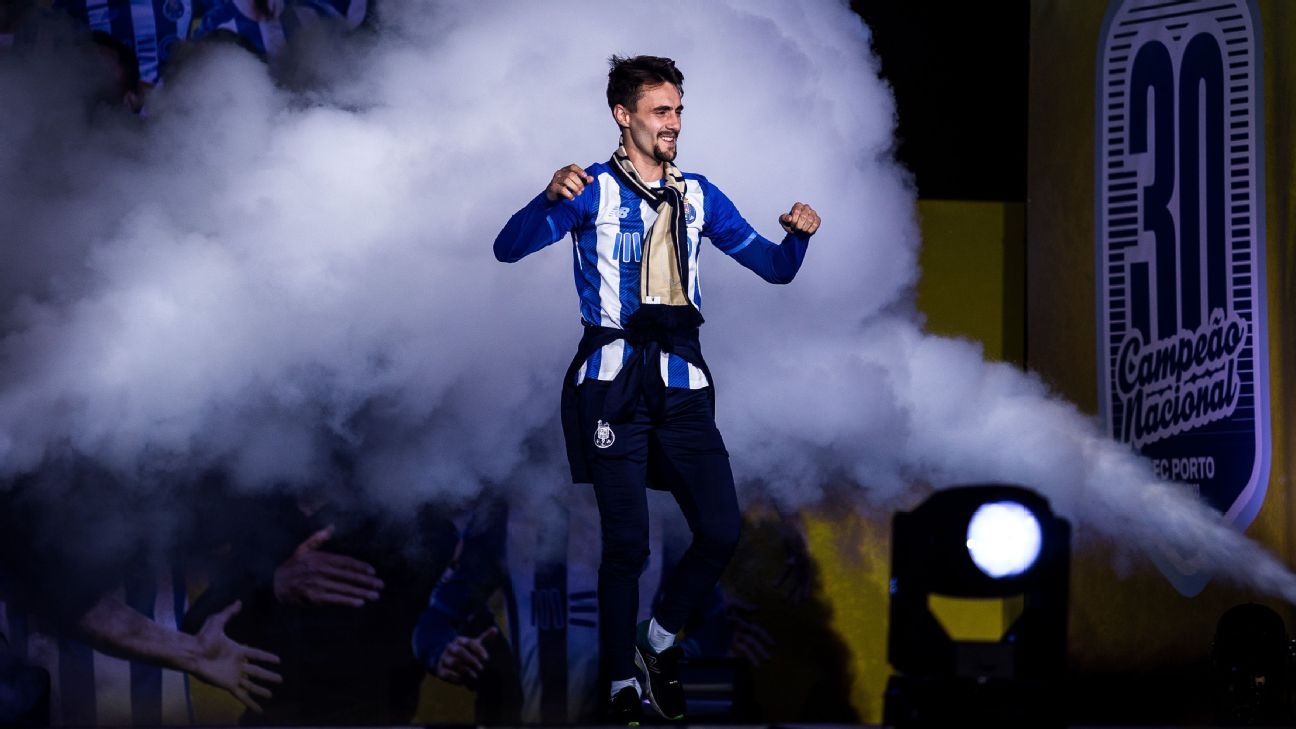 Arsenal have agreed a deal to sign FC Porto attacking midfielder Fabio Vieira for €35 million, with a further €5m possible in performance-related add-ons, but what type of player are they getting?

Vieira, 22, played 39 games across all competitions last season, registering seven goals and 16 assists, while in his career for the Portuguese club he had 10 goals and 18 assists from 76 games.

Coming through the club’s youth academy, he made his first-team debut on June 10, 2020 against Maritimo.

He has yet to make his debut for the senior Portugal national team, but is the captain of the under-21 side and has 13 goals from 20 games since making his debut on Nov. 14, 2019.

So what can Arsenal expect? We dig into the data, as well as asking former scout Tor-Kristian Karlsen for his assessment.

At 5-foot-7, Vieira lacks the physical size to dominate the midfield like his namesake Patrick Vieira did for years at Arsenal. Indeed, he’s a very different style of midfielder to the legendary Frenchman.

Vieira has played in a number of positions, including as a No. 10, a No. 8 and a second striker. He tends to play centrally behind the striker(s) or cuts in from the right onto his stronger left foot, as his touchmap below shows.

Vieira has some impressive stats among his FC Porto peers this season, playing 27 of the club’s 34 league games on the way to winning a second successive title and the Portuguese cup.

Rapid turns and a change of pace, mixed with a low centre of gravity, make the attacking midfielder a headache for opponents and an entertainer for the fans.

When in form, he can advance forward by slaloming past defenders and is dangerous in the final third. His left foot is excellent, and while he hits a powerful shot, he is also sensitive enough to thread well-weighted passes to runners behind the defensive line. — Karlsen.

He was involved in 23% of Porto’s goals in the Portuguese league last season, so is an attacking threat with an eye for a key pass.

However, he can also score himself and isn’t afraid to take on a shot from distance.

How he can improve

Vieira can be slightly selfish and prone to taking on an opponent too many times. As with most other talents who thrive on their technical ability, he can improve his defensive discipline. There’s also a need to provide a more consistent presence for the entire 90 minutes. — Karlsen.

Dusan Fitzel, a member of UEFA’s team of technical observers who were on the panel of deciding who would be Player of the Tournament at the 2021 U21 Euros, explained the choice: “During the tournament, he was a key player for Portugal. A playmaker who creates a lot of chances. An excellent link between midfield and attack.”

Manuel Tulipa, the Maritimo U23 manager who coached FC Porto’s U15, U17 and U19 sides from 2017 until 2020, told Maisfutebol: “Fabio Vieira is special because he can see everything with his head on the ground. He is a player who provides assists and can enter the area, score in mid-range and in dead-ball situations. He’s also improved in terms of pressing orientation.

“But what most surprises me is the way he displays his quality when many teams use a low block on the pitch, and he can decipher what the game demands. These are the players that are worth a lot of money.”

Who else was he linked with?

Liverpool, Man United and Tottenham have reportedly scouted him in the past.

Arsenal boss Arteta told Sky Sports back in 2020 what adding creative players would do for the club, and it appears he is continuing that theme.

“That is a lot of players who are now not here. We have to renew that cycle, because if not, those kind of players won’t be there for us anymore. They are a big part of what any squad needs.”

Will he fit in at the Emirates?

On that basis he’d have no problem settling into the team attacking-wise: he can pass with both precision and pace to shift the ball around, while in addition he’s got the end product (the eye and execution of a killer pass or a left-footed long-range effort) and the ability to make line-breaking passes (and runs with the ball) against low-sitting opposition.

His expertise on set pieces is also an added bonus. How he will deal with the defensive side, in a team in which physicality can be lacking from the central attacking midfielders, is another question (example: Martin Odegaard performed a lot more ball recoveries (162 vs. 59) and entered over double the amount of defensive duels (103 vs. 50) last season compared to Vieira.)

Arsenal are clearly confident that there’s a lot more to come from the Portuguese midfielder but, while he’s a player in rapid development, he may not be too far off reaching his ceiling. — Karlsen.